Rest in Pieces: Why I mourn the death of Jammu & Kashmir’s Article 370 special status

Many Kashmiris believe the state's special laws were drafted by a Hindu Maharaja and a Kashmiri Pandit lobby to keep outsiders out. They see this revocation as them being punished now.

If losing something makes one a loser, Jammu and Kashmir (J&K) has lost many things that were historically and constitutionally iconic. And this loss has come as a bolt from the blue, at least for the people of restive Kashmir.

With the scrapping of its special status via Article 370, J&K has been divided into two union territories including Ladakh — politically, a demotion from the previously united statehood.

The state’s own constitution and flag also cease to exist.

On August 7, 2019, President Ram Nath Kovind declared the abrogation of the provisions of Article 370, which gave special status to J&K. The move came a day after both houses of Parliament passed a resolution in this regard.

Subsequently, in his address to the nation, Prime Minister Narendra Modi sought to explain the reasons behind the move. Too sudden for words? The decision to scrap Article 370 has left the country polarised. (Photo: Reuters)

On August 8, 2019, speaking directly to fellow citizens, especially those in Jammu and Kashmir and Ladakh, Modi assured them that Article 370 had been removed for their benefit, to fulfill the aspirations of the people and lift roadblocks on the path to development and progress of the region.

While the Modi government has numerous plans to pump in peace and prosperity in the region, there are also questions.

Will the abrogation of the special status help improve the situation in restive Kashmir — or add fuel to fire?

During the Partition in 1947, instead of opting for the Islamic Republic of Pakistan, the Muslim-majority state of J&K acceded with the Hindu-majority country of India for an obvious reason — of mutual trust in secular nationhood.

Those taking a dig at ‘Nehruvian blunders’ today need to reply to a simple question. Would Muslim-majority J&K have acceded to India if instead of the secular Congress with Nehru as the leader, a Hindu right-wing party was in power back then?

An investment of faith of seven decades has been lost within the shutting of an eye —  that too, when public alienation has only festered in Kashmir. 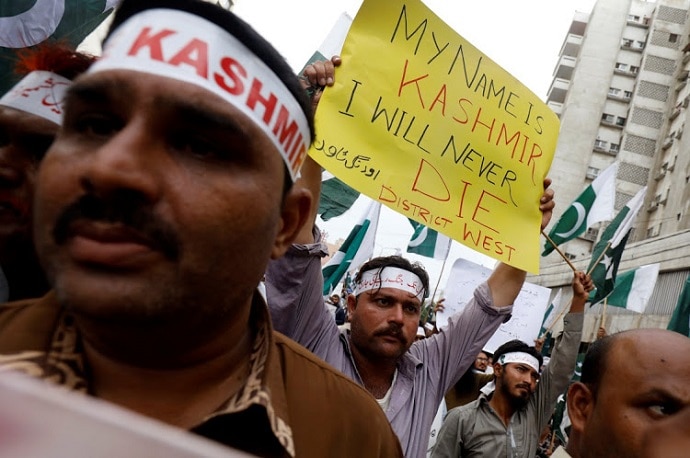 Protests will follow: But could these fuel more militancy in the state? (Photo: Reuters)

On the one hand, despite a military assault on militants through Operation All Out, militancy is witnessing a deadly rise with more and more local youth picking up arms.

The growing vacuum of public participation in democratic processes, on the other, is another eye-opener. The aggregate voter turn-out in the 2019 Parliamentary elections in the region was merely around 22% — as compared to 56% previously.

In Kashmir, forget the separatist sentiments, even those who swear by the Constitution of India are up in arms against the decision. Such voices of dissent include all the surviving former Chief Ministers from different political ideologies, ranging from nationalist Congress to regional players like the National Conference (NC) and Peoples Democratic Party (PDP).

A government that has been unable to convince even the mainstream leaders looks to now win back the hearts of common Kashmiris.

The same BJP which, in 2018, following a public outcry, revoked its decision to allow the purchase of land by non-Himachalis in Himachal Pradesh, has chosen to deprive J&K of such exclusivity.

The same Modi-led government, which, during its previous stint, opted for a Naga peace accord with the country’s oldest insurgents in the north-east, has opted to break the legal assurances on confidence-building on Kashmir.

It has left Kashmir dazed.

Article 35A that guaranteed exclusive rights to domicile was seemingly the extension of the state subject laws promulgated by the Dogra Maharaja Hari Singh in 1927 — as history goes, the Maharaja passed the law following a strong campaign by Kashmiri Pandits who were opposed to the hiring of civil servants from Punjab, because it had affected their representation in the Dogra administration. It is also widely believed that the Kashmiri Pandit agitation of the time did not affect the Muslim majority because the Dogras as a policy, many suggest, kept Muslims largely out of the administration. Hardly a happy Eid: A tight clampdown on Kashmir continues — despite the promises of a better life. (Photo: Reuters)

So, when even a pro-Hindu Maharaja and Kashmiri Pandits didn’t want outsiders (no matter whether from the same faith) to enjoy such rights and privileges in J&K, how can the undoing of such historic decisions help now?

At a time when international terror outfits are desperate to establish a base in Kashmir, New Delhi’s decision, it is feared, may prove a catalyst to fuel the armed insurgency in the region.

And then, when the previous promises as constitutionally drafted in the form of the twin Articles 370 and 35A have been broken with legal authority, how can a common Kashmiri rely on the new assurances?

As of now, the loss looks irreparable.

Amid restrictions on public movement and a clampdown on telecommunication services — including landlines and mobile phones — all one can do is mourn.

May the soul of J&K’s special status rest in peace!

Also read: BJP’s new roadmap for Kashmir may derail due to economic slowdown

#Terrorism in kashmir, #Pakistan india tensions, #Maharaja hari singh, #Amit shah section 370
The views and opinions expressed in this article are those of the authors and do not necessarily reflect the official policy or position of DailyO.in or the India Today Group. The writers are solely responsible for any claims arising out of the contents of this article.