Whose secret was Article 370? Modi-Shah never hid their intentions on it. Why did some of us refuse to see?

To expect BJP to have gone slow on Article 370, its pet peeve of 70 years, shows political naïveté. In contrast, the PM moved with meticulous planning, down to his August 7 address.

If the term ‘leakproof’ could be patented, Narendra Modi and Amit Shah could lay first claim to it.

A pattern has emerged in their style of governance — keep adversaries clueless about their next move. When people begin to get a whiff of something big about to happen, throw a few red herrings about to lead them astray. Then, while the other actors are still busy guessing, strike with precision.

‘Mission Kashmir’ was straight out of the Modi-Shah playbook. 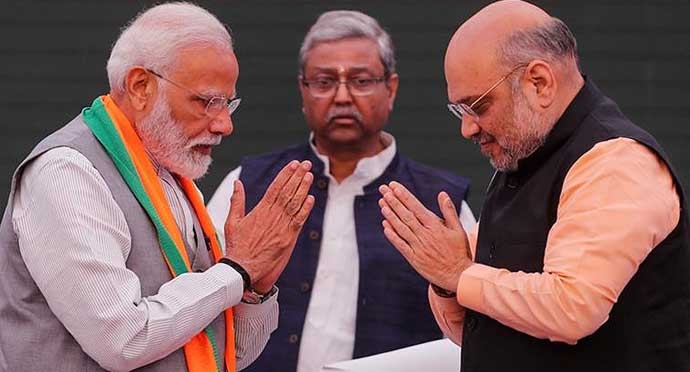 What's it all about? The Modi-Shah pair left everybody guessing — and nobody came even close. (Photo: Reuters)

There is usually a sequence in the Modi-Shah script — it comes in three parts. Those who were taken totally by surprise and peddling a different narrative till the night before suddenly discover in hindsight how the signs were always there for everyone to see. From that, they develop new theories about the rationale of the decision and what might have triggered the action.

To be honest, even this writer, in his last week’s column, had discounted the possibility of Modi-Shah going all the way to revoke Article 370 and Article 35A at this juncture — but he was in august company. Many veteran and celebrity journalists had thrown up their hands in exasperation, trying to read the writing over the Kashmir sky.

Thus, it is curious that many in politics and media who are opposing the abrogation are criticising the manner and method in which it was carried out, rather than the act itself. The government is being charged of a clandestine coup without taking all stakeholders in Kashmir into confidence. Interestingly, some leaders speaking against the motion in Parliament, like Marumalarchi Dravida Munnetra Kazhagam’s (MDMK) Vaiko, blamed the Congress for Article 370 and bringing the situation in Kashmir to such a sorry pass. The BJP is being faulted for lack of consultation — but it never made any secret of its views on Article 370 and it also featured in its election manifesto for a long while.

The BJP also had to bear the cross around its neck for the failed marriage with the Peoples Democratic Party (PDP) in Kashmir. Modi was mocked for developing weak knees after muscular posturing on Kashmir.

Thus, to expect the BJP to go slow on its pet peeve of 70 years, after returning to power with such a thumping majority, would be pure political naïveté.

Consultations were happening. The signals were there. The waters were being tested. But, as I wrote last week, if only people got out of their echo chambers and took off their blinkers to see around. The Indian ‘Kashmir experts’ from the international junket circuit thought their views were infallible and the two leading mainstream dynasties believed their ‘buy in’ was indispensable. In one stroke, Modi and Shah smashed the delusions of the first and showed the second their place in the new scheme of things.

It will be instructive to study the split between the parties that came out in support for the BJP and the ones who objected.

The Biju Janata Dal (BJD), Bahujan Samaj Party (BSP) and YSR Congress were the unexpected allies. Aam Aadmi Party leader Arvind Kejriwal's backing was amusing. But the Janata Dal (United), on the other hand, raised eyebrows by walking out.

However, what was most intriguing was how the Congress appeared divided down the middle on the issue.

It was natural for a Ghulam Nabi Azad, who hails from Kashmir and has been the architect of many pacts for the Congress in the state, to vociferously decry the move. But to find the Congress’ Chief Whip in the Rajya Sabha, Bhubaneswar Kalita, resigning in protest from the party, saying “Congress is committing suicide”, the party’s legal eagle MP Abhishek Singhvi endorsing the political wisdom of removing Article 370, and veteran leader Janardan Dwivedi saying it was “a historical mistake reversed today”, was surprising. One of the Congress’ young Turks, Deepender Hooda, questioned the need for having a proviso like Article 370 in this day and age. This dissonance may well be symptomatic of the inner-party conflicts within the Congress. But it also prompts one to ask if the alignments of other parties are based more on vote-bank considerations rather than ideological positions.

That brings us to the question of timing.

A popular theory seems to be emerging that while removing Article 370 and 35A was certainly part of the Modi 2.0 agenda, it was brought forward because of US President Donald Trump’s recent cavalier statement about Narendra Modi’s purported request for him to act as a Kashmir mediator and the imminent developments on the Afghanistan-Pakistan border.

Those who know Modi and Shah’s style of operation would say that the duo does not undertake anything without meticulous planning. Therefore, it is unlikely that such a massive and high-risk project would be rushed through in two weeks, no matter what the provocation. But someone close to the BJP’s inner circles whispered: “PM Narendra Modi deliberately chose August 7 to address the nation on J&K because on that very date in 1952, Syama Prasad Mookerjee spoke against 370 in the Constituent Assembly of which he was a member. If the date was locked like that — well, imagine the details they would have gone to,” he said.

The most disingenuous argument has been that 'Mission Kashmir' was a ploy to divert the attention of the nation from the economy.

Nothing could be more simplistic.

If anything, a resolution of the Kashmir problem would take off a huge dead-weight and drain of resources from the Indian economy. Yes, it needs fixing: And no, we haven't stopped looking. (Photo: Reuters)

Some eminent jurists, including P Chidambaram and Abhishek Singhvi, have expressed doubts if the procedure followed by the government will stand legal scrutiny — it is certain that some parties would challenge the move in the Supreme Court. But it is doubtful if the government would have contemplated such a high-stakes decision without taking the legalities into consideration and plugging all loopholes.

So, it was no coincidence that the country’s leading Constitutional expert, Harish Salve, put his seal on the legal merits of the proposal.

Having said that, yesterday’s was a small step towards setting right a historic blunder. It is difficult to turn the clock back. So, Modi will have to re-start the journey that Mookerjee had embarked on August 7, 1952.

Modi and Shah have displayed the will and courage to bite the bullet — but the real test will be in winning the hearts of Kashmiris through ‘vikas and vishwas’.

Fears have also been raised that this may invite intervention and push-back. Having disengaged from the Western borders, Pakistan can now concentrate its disruptive capabilities on Kashmir. Some have painted a disaster scenario in which Kashmir can turn into Kosovo and the Line of Control (LoC) a Gaza strip.

But Modi and Shah understand the consequences of a slideback. They would have certainly tied up the international ends diplomatically. After the surgical strikes in Balakot, Pakistan would be foolish to underestimate the might of the Indian armed forces. Under President’s Rule and Union Territory, separatists and home-grown terrorists will not have a field day as before.

Modi is too passionate about his idea of a ‘New India’ — and for that, Kashmir is very close to his heart.

He will not let his dream be destroyed by any misadventure.

#Narendra Modi, #Amit Shah, #Jammu and kashmir union territory, #Article 370
The views and opinions expressed in this article are those of the authors and do not necessarily reflect the official policy or position of DailyO.in or the India Today Group. The writers are solely responsible for any claims arising out of the contents of this article.