Amit Shah as the new Sardar Patel: By revoking Article 370, Amit Shah has emerged as the most decisive Home Minister

The RSS and BJP always stood against special status for J&K, arguing it meant alienation from the rest of India. By revoking Article 370, Amit Shah has put an end to this distance.

BJP leader Amit Shah cemented his place as the most decisive Home Minister in Indian history after Sardar Vallabhbhai Patel on August 5 when he, on the floor of the Rajya Sabha, announced the abrogation of Article 370 and reorganised the erstwhile state of Jammu and Kashmir (J&K), making Ladakh a Union Territory without legislature and creating a separate Union Territory of J&K with legislature. The late former External Affairs Minister Sushma Swaraj in her last tweet thanked Prime Minister Narendra Modi, saying it was the day she had been waiting to see.

It was a glorious tribute coming from one of India's finest daughters.

What made Sushma ji, Advani ji, all Rashtriya Swayamsevak Sangh (RSS) members and BJP workers say that they had been waiting for this day is that the abrogation of Article 370 from J&K was a dream — for which many karyakartas had sacrificed their lives.

During my college days, as an ABVP karyakrata in Maharashtra, I too had raised the slogan, believing in the fact that Article 370 would one day be scrapped.

Syama Prasad Mookerjee, founder member of the Jan Sangh, sacrificed his life for the complete integration of J&K in the Indian Union — and for the larger Sangh parivar, this is most definitely an emotive issue.

In an image from before that went viral as anticipation built over what was happening in Kashmir just days ahead of the abrogation announcement, PM Modi himself is seen sitting on a dharna, demanding the abrogation of Article 370. 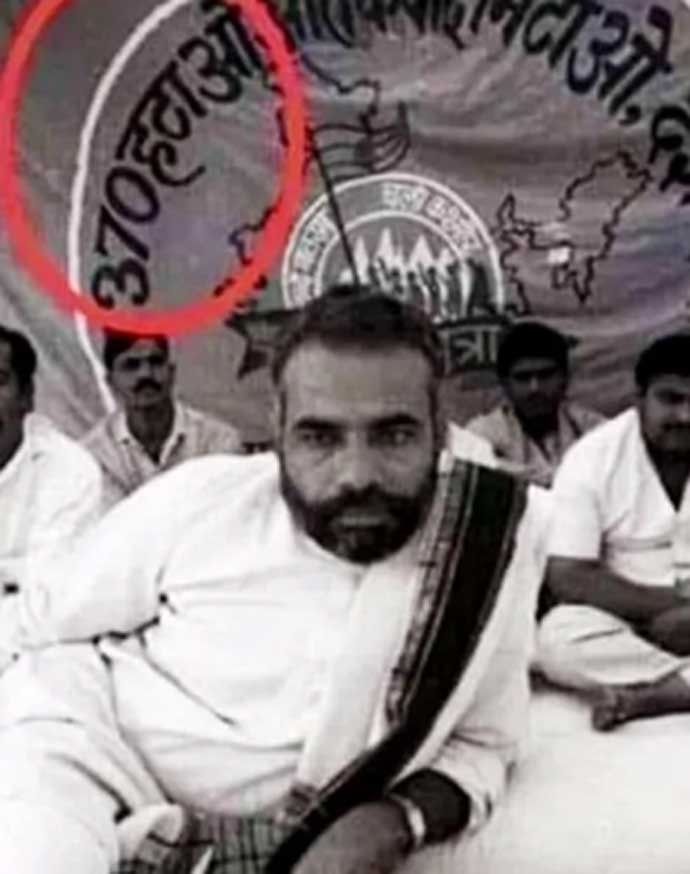 History in the making: Narendra Modi on a dharna in earlier times, demanding that Article 370 be scrapped. (Photo: Twitter)

Mookerjee was opposed to the special status granted to J&K from day one. He questioned why J&K should have its own Constitution and why a Sadar-e-Riyasat and Prime Minister — unlike any other state of the Union?

As at that point in time, one could not enter J&K easily, Mookerjee travelled across the country with Atal Bihari Vajpayee to raise awareness about the issue and on May 11, 1953, he entered the territory. His arrest and later death in custody on June 23, 1953 finally brought an end to the permit system for entry into J&K.

By ending Article 370 in J&K, the BJP has realised his dream.

The famous slogan, "Ek desh main do Pradhan, do Vidhan, do nishan, nahi chalega" (No room for two leaders, two Constitutions and two flags) was coined by Mookerjee.

Modi and Shah have ensured that the slogan's promises are kept. Jagmohan, two-term Governor of Jammu and Kashmir, and later, a minister in the Vajpayee cabinet, was a key ideological figure who was instrumental in building the momentum for the final abrogation affected by Modi and Shah.

In his book My Frozen Turbulence, Jagmohan wrote, "Article 370 is nothing but a breeding ground for the parasites at the heart of the paradise. It skins the poor. It deceives them with its mirage. It lines the pockets of the 'power elites'."

This is in sync with what Home Minister Shah said in Parliament, "Article 370 benefits only two-three families."

In fact the government's explainer note mentioned Jaitley's arguments made on the subject while he was recuperating from his kidney transplant in 2018.

Revoking Article 370 from J&K was a promise made by the BJP in its election manifesto, which read, "Article 370 poses a psychological barrier for the full integration of the people of Jammu & Kashmir with the national mainstream. The BJP remains committed to the abrogation of the article."

The move not only helps in keeping a promise made to the people of India at large, but in fulfilling a long-standing demand of the people of Ladakh. Granting Ladakh Union Territory status would help boost tourism and help the region strengthen its unique spiritual and cultural identity.

Modi has ensured history will remember him as a strong, decisive, daring Prime Minister, who delivered on his commitments to voters.

And Amit Shah would be remembered as modern India's most decisive Home Minister — the new Sardar Patel.

The Kashmiris will finally get more employment, education, tourism, industry and benefits under central government schemes in terms of reservations and central laws.

The sense of alienation fuelled by the separatists and instilled in Kashmiris since childhood will be eradicated as they will begin to feel more like Indians than just Kashmiris, just as a child from, say, Mumbai, Delhi or Guwahati.

It is a great achievement for India as a nation and a win-win situation for all stakeholders.

Also read: 'Article 370' Is How Liberals Oppress: Those supporting Article 370 support the caste, gender and sexual apartheid this enabled