Advertisement and publicity is the only department where spending of the AAP government has increased substantially.

If performance is the basis of governance, then Delhi chief minister Arvind Kejriwal must resign immediately. However, if false propaganda and media blitz created by using public money is the new normal, then the elected shall never go out of power.

In the first budget (2015-2016), the Kejriwal government proposed a manifold increase in budgetary allocations. The share given to the education, health and transport sectors was advertised left, right and centre but come March 2016 and not even half of these provisions have been utilised. On one hand, Kejriwal keeps  demanding additional funds for Delhi, while on the other hand, many important departments of his government have not even spent 50 per cent of the total planned funds.

The performance has been so miserable that public welfare departments of labour and civil supplies could not spend up to 90 per cent of the allocated budget. As per information available in the public domain, the Kejriwal government has barely been able to spend Rs 11,900 crore out of the Rs 19,000 crore budgetary allocation earmarked for the planned projects in financial year (FY) 2015-16. This is a significant decline in the deployment of planned expenditure at 65 per cent when compared with the performance of the Delhi government in the previous years - 80 per cent in FY15, 87 per cent in FY14 and 88 cent in FY13.

What the #EkSaalKejirwal term lacked in terms of planned expenditure on key sectors, it more than made up for mass media presence. Advertisement and publicity is the only department where spending of the Aam Aadmi Party (AAP) government has increased substantially. That is probably why the top bosses from the huge business media houses never let Mr Kejriwal miss a single headline!

But bereft of performance, will Kejriwal's marketing work or is it bound to fail just like the 2004 India Shining campaign of the BJP? Here is a brief look at the promises AAP government failed to keep. 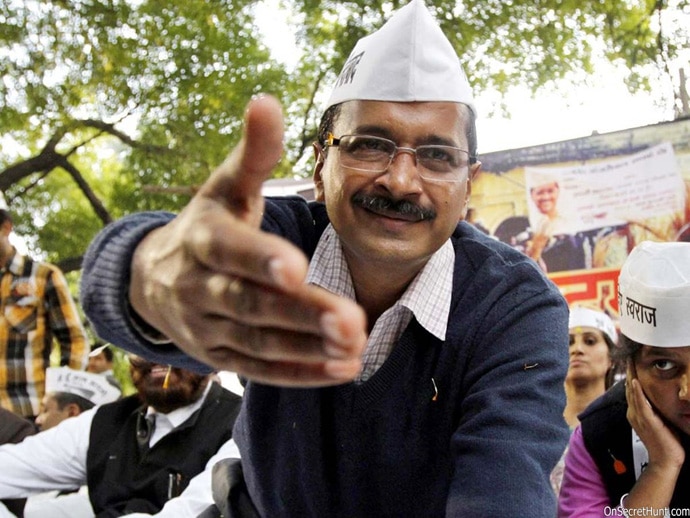 In the budget 2015-16, the AAP government increased allocations for the education sector by 106 per cent. It was pitched as an unprecedented move. The CM even used this promise as a vote bank in the DU student union elections.

Reality: Deputy chief minister and finance minister Manish Sisodia proposed a "planned" expenditure of Rs 3,051 crore in the education sector but since most of his time was spent in holding press conferences against the lieutenant-governor (L-G) and the Centre, he only managed to spend about Rs 1,759 crore from the outlay, thereby leaving about 40 per cent of the corpus for Delhi's education sector unspent!

Though the high voltage battle of the Kejriwal government with the Centre has successfully managed to overshadow the administrative failures, some are extremely difficult to ignore. Out of the Rs 30 crore the Kejriwal government received from the Centre for advancement of the Right to Education (RTE) programme (a scheme for the aam aadmi), it could only disburse Rs 2 crore (6.66 per cent) for education of the poor.

In another promise towards the education sector, the AAP in its manifesto said: "It  will build 500 new schools with a special focus on secondary and senior secondary schools" and "will open 20 new colleges under Delhi administration". This means an average of 100 schools and four colleges were to be opened each year. This promise remains a non-starter.

In the health sector, the allocation in the previous financial year (2015-16) was highly promising, a "first of its kind" in the history of India. The inefficiency in utilising the same was just as historical. The AAP government could not spend 40 per cent of its public health budget and at the same time, an appalling 60 per cent of its allocation for medical institutions remained untouched.

40 per cent of the total budget allocated for the transport sector remained unutilised. Not a single DTC bus has been purchased in the last one year and despite the said situation, the people of Delhi made the Odd-Even scheme a success.

94 per cent of the money it had allocated for the tourism sector remains unspent, leading to a 30-40 per cent decline in the inflow of tourists to the national capital in past one year.

Both being key departments for the betterment of the underprivileged witnessed an all time low in their performance. While 94 per cent of the total budget for civil supplies (such as ration and food grains) remained untouched, in the sector for labour welfare, 80 per cent per cent of the total planned expenditure remained idle in the government treasury till January 31.

Therefore, except for the planned expenditure for the sectors wherein it is simply providing direct subsidy (electricity and water), the AAP government miserably failed to deliver in almost all key departments. Even the promise of Wi-Fi remains a non-starter.

Since, the main focus of the chief minister remained on scoring political points in issues across the spectrum, it led to a sharp decline in tax collection growth compared to previous governments, where VAT collection grew by 17.86 per cent in the year 2012-13, the projected growth this year has been reduced to 10 per cent. Elaborate promises are being made by Kejriwal, again with prime focus on the same sectors.

However, before the AAP government enters the self-congratulatory mode, the watchdog (media) must convey an account of their failures from the previous budget.

Post your comment
#Budget 2016, #Delhi Government, #AAP, #Arvind Kejriwal
The views and opinions expressed in this article are those of the authors and do not necessarily reflect the official policy or position of DailyO.in or the India Today Group. The writers are solely responsible for any claims arising out of the contents of this article.

The writer is a Supreme Court advocate and in-charge of Delhi Congress' legal affairs.