5 comments by Kejriwal that's made him a joke in Punjab

This makes him a perfect Mungerilal.

New Delhi chief minister and national convener of the Aam Aadmi Party (AAP), Arvind Kejriwal is a perfect dream merchant. He is busy in political marketing to sell his "Sada Khwab, Navan Punjab" (our dream, a new Punjab) catchphrase to Punjabis these days. Some of his dreams make him a Mungerilal as he appears to be daydreaming.

Kejriwal's remarks about Punjab's politicians, the Badals and Captain Amrainder Singh in particular, while at one hand are poignant, they are also funny. Punjab cabinet minister and brother of Union minister Harsimrat Kaur Badal, Bikramjit Singh Majithia, is always on his mind as and when he addresses the media or an election rally.

He stands up, with fists clenched, and anger on his face, and says "Majithiae... tere parche se nahi darta main... ye le faad ke phenkta hu... tere parche ko (Mr Majithia, I am not afraid of your case... look... I am tearing it).

Captain is contesting against Badal on his request!

Kejriwal never leaves his opponents and adversaries alone .When Captain challenged him for a bout, he suggested the names of Bhagwant Mann and others, saying that Captain is a local leader and would rather prefer his bosses Rahul or Sonia Gandhi to fight.

Then he challenged Captain to contest against senior Badal (Parkash Singh Badal) and when Captain accepted, he said the latter was contesting on Badal's request to divide anti-Badal votes. Kejriwal claimed Captain was fighting an election to claim anti-Badal votes which were being polled to Jarnail Singh (of AAP).

He accused Captain of conspiring with the "enemy" and also said that he was thus, stabbing Punjab in the back.

One fails to understand how all anti-incumbency votes were being polled to Jarnail Singh who was not even a Punjab resident before he moved his nomination papers. 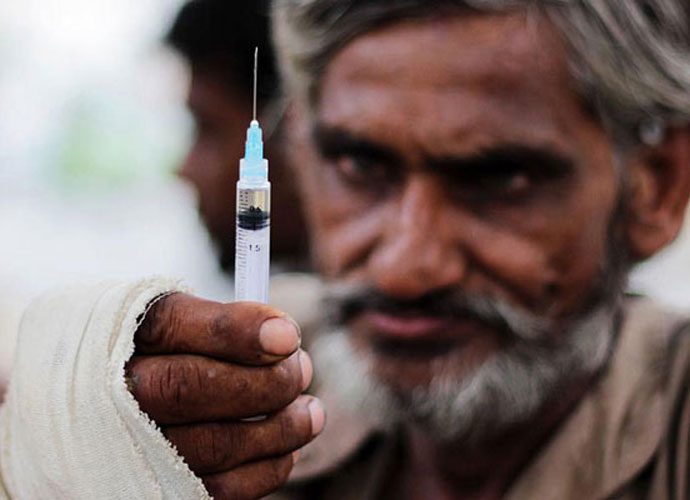 According to Kejriwal, Punjab has nearly 40 lakh drug addicts.

Bikramjit Singh Majithia will be in jail!

Kejriwal is not only claiming to form the government in the state elections by March 20, but also to jail Majithia by April 15. He gives a period of nine days after the election results to form the government. The claim made by him about jailing Majithia is also ridiculous as nobody can arrest a person without convicting him, that too by a fixed date.

Will recover "loot", fine and interest from Badals!

Kejriwal says his government will constitute an SIT to recover the money "looted" by the Badals. They will also be fined, besides coughing up interest on the "loot". How will the SIT calculate the money, levy interest and recover fine? Firstly, it will not be easy to establish the charges; also, calculating the money, fine and interest will be a Herculean task.

Addressing lawyers in Ludhiana, Kejriwal claimed "his government will review the legal system and make sure that ongoing cases are settled in six months". There are over 2,84,746 pending cases in the Punjab and Haryana High Court (pertaining to Punjab) and over 5,13,708 cases pending in various district courts. Kejriwal will have to come up with a magic pill, popping which will solve nearly 8 lakh pending court cases.

Will end drug menace within a month!

The AAP in its election manifesto says it will wipe out the state's drug business within a month. Eradicating a menace which has dug deep into the state's society, especially in the last decade, is not child's play. You cannot get rid of it by accusing Akali Dal leaders alone. Leaders of other parties, including the Congress and people from all walks of life, including police officials, have been running the drug business. According to Kejriwal, the state has nearly 40 lakh addicts, and sending them to rehab will be impossible within a month.

Also read: AAP has given hope to Punjab

#Punjab Polls, #Arvind Kejriwal, #Assembly elections 2017
The views and opinions expressed in this article are those of the authors and do not necessarily reflect the official policy or position of DailyO.in or the India Today Group. The writers are solely responsible for any claims arising out of the contents of this article.