As the political rhetoric on all sides worsens, one can only ask, 'Ye andaz-e-guftagu kya hai?'

Polls now are seeing terrible language used for political rivals, and even their families, by all sides. There was, however, a gentler time in politics when politicians behaved like gentlemen

In the run-up to the all-important general elections next summer, one thing that stands out is the sharpened toxicity of the political discourse. It is almost a given that, in the heat and dust of electioneering, the discourse acquires a sharp edge. The exchanges between political parties become more pointed and, at times, even personal.

There has been political vitriol exchanged by all sides in these polls. (Source: PTI)

However, what we are witnessing is something unprecedented — both in terms of coarseness and the vitriolic nature of the exchanges.

Make no mistake. There is no innocent party here. Neither of the parties is blame-free. There is little to be gained in apportioning blame for who started it. Responding to the vicious campaign launched by the Republicans, Michelle Obama had said, “When they go low, we go high”. Unfortunately, the opposite is happening in India. Both parties appear to have dropped even the fig leaf of civility and are competing to see which one of them can go lower - as a result, politics is in a free fall. Her philosophy is: 'When they go low, we go high.' No one is listening in India though. (Source: Reuters)

In an election season, everything appears to be fair game. From the PM’s parents and his caste to Rahul Gandhi’s grandparents and his gotra. We have spokespersons now openly asking Hindus to "wake up", and even threatening to "change the name of a mosque to a Vishnu temple”, to a Chief Minister making this election into an “Ali versus Bajrang Bali" battle. 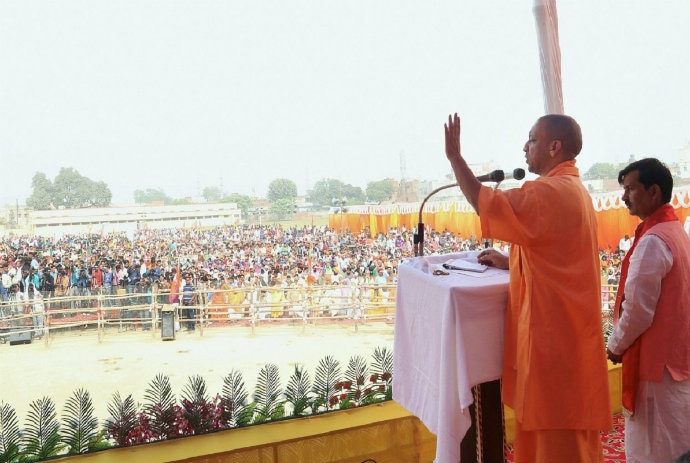 Gone is the battle of competing ideas, or a debate on issues like development or the lack of it. All we get to hear almost on a daily basis is abuse and vitriol.

Elections in India have increasingly acquired a personal edge - and the blame, unfortunately, must lie with the leaderships of the political parties. In the past, leaders like Atal Bihari Vajpayee, Chandrashekhar, Indrajeet Gupta and Dr Manmohan Singh desisted from attacking the persona of their opponents - they did not see their political rivals as personal enemies. Families and children were clear no-go areas.

Now, unfortunately, everything is par for the course.

Old conventions and niceties have been conveniently discarded. For instance, leaders never ever discussed domestic politics when travelling abroad. These days, both PM Modi and Rahul Gandhi openly criticise each other while touring abroad. Today’s politicians don’t just view their opponents as rivals but more as enemies. Narendra Modi has been called a “Maut Ka Saudagar", a "Chaiwalla" and "Neech” at different points of time. Sonia Gandhi was likened to a “Jersey cow”, Rahul Gandhi to a “hybrid child” and Dr Manmohan Singh, to a Pakistan agent.

There was, however, a time not so long ago when politicians fought hard, but fought clean and were gracious enough to acknowledge - and even praise each other. Pandit Nehru, after being at the receiving end of a blistering attack from Atal Bihari Vajpayee on the floor of Parliament, had the graciousness to not just compliment the first-time MP for his speech but also predict that Atalji could one day become PM of India. Many years later, Atal Bihari Vajpayee gave full vent to his eloquence in hailing Indira Gandhi as Durga. Former PM Vajpayee was known for his sharp oratory. But never for sharp words. (Source: Archives)

In 1984, Rajiv Gandhi ensured Vajpayee's defeat in Gwalior at the hands of Madhav Rao Scindia, but when he learnt of the BJP stalwart's serious kidney ailment, he ensured that Vajpayee was sent to the USA on an official assignment so that he could get himself treated. Former Prime Minister Chandrashekhar had his battles with the Gandhis, in the last stages of his life; he was battling cancer and was adamantly against going abroad for treatment. Sonia Gandhi called on him and personally requested him to accept the UPA government's decision to send him to the US for treatment.

In earlier times, politics just did not get personal. (Source: PTI)

Perhaps that was a gentler era - one in which you could be rivals and yet treat each other with a certain amount of civility. It was an era in which there were certain no-go areas. One in which an opponent was to be countered - but not abused.

Also read: Modi gets direct, Congress fights right back. Why Madhya Pradesh polls promises to be a nail-biting finish

#Assembly elections 2018, #Atal Bihari Vajpayee, #Sonia Gandhi, #Rahul Gandhi
The views and opinions expressed in this article are those of the authors and do not necessarily reflect the official policy or position of DailyO.in or the India Today Group. The writers are solely responsible for any claims arising out of the contents of this article.