Asaduddin Owaisi's AIMIM plans to score big political goals in UP assembly elections 2022. But will it be able to pull away the traditional muslim vote from the Mulayam Singh Yadav's SP?

Asaduddin Owaisi, Lok Sabha MP from Hyderabad, has decided to field 100 candidates of All India Majlis-E-Ittehadul Muslimeen (AIMIM) in the upcoming Uttar Pradesh Assembly Elections 2022. The party has formed an alliance with Babu Singh Kushwaha and other small parties, and is calling the alliance Bhagidari Parivartan Morcha.

Owaisi, in one of this statements, said that if the alliance wins, it will have two CMs in five years, one from the Dalit community, and the other from the OBC community. The alliance will also have three deputy CMs; one of whom will be Muslim.

In his rallies, Owaisi has called out secular parties like the Samajwadi Party (SP) and the Bahujan Samaj Party (BSP) as 'political secularists', who he says use Muslims only for votes. He has called for the Muslim leadership in the state to work towards uplifting the socio-economic condition of the community. 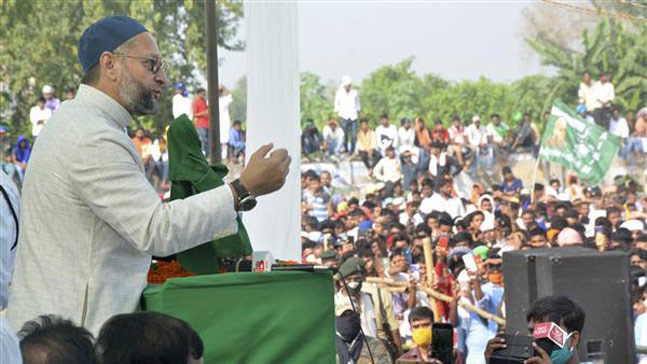 But statistics tell a different story as far as the voting pattern of the people is concerned.

In a triangular contest, AIMIM causes a blow to the vote share of a secular party, which ultimately benefits the BJP.

One of the glowing examples we have is of the Bihar Assembly Elections in 2020. Owaisi’s AIMIM contested on 14 seats in the Seemanchal region under Grand Secular Democratic Front (GSDF) and won five, but it dented the vote bank of the Mahagathbandhan of RJD-Congress in Phase 3 of the elections.

In UP, Muslims constitute a big vote base, which has been instrumental in making political parties rise to power. Be it the SP or the BSP, or even Congress, all the parties give tickets to Muslim candidates to secure a majority in the 403-seat assembly. In such a scenario, the entry of Owaisi’s AIMIM is bound to create confusion.

Take a closer look at the arithmetic of the Muslim vote in UP.

STATE WITH LARGEST POPULATION OF MUSLIMS

UP is home to the largest population of Muslims in India. According to the population census of 2011, Muslims make up to 19 per cent of the state’s population. Mulayam Singh Yadav’s Samajwadi Party enjoys considerable support from Muslims.

According to the India Today Axis Poll survey data, there are 85 seats in UP’S 403-seat assembly, where the Muslim population is between 25-50%. The seats are in the 14 districts of Meerut, Muzaffarnagar, Moradabad, Bareilly, Saharanpur, Bijnor, Balrampur, Shravasti, Ghaziabad, Baghpat, Gautam Buddha Nagar and Jyotiba Phule Nagar.

Political experts have said that in a close contest, where a constituency has 25-40 per cent Muslim vote share, the split of minority votes makes it easier for a BJP candidate to secure the win. Chances of SP winning the seat increases if the Muslim vote share is above 40%.

WESTERN UP GOES TO POLLS IN FIRST PHASE A picture from Western UP. Photo: Getty Images

In the first phase, AIMIM has 12 candidates, out of which 9 are Muslims and 3 Hindus. AIMIM has fielded candidates in Muslim-dominated constituencies, making it a triangular contest in seats like Charthawal where Tahir Ansar of AIMIM contests against Salman Saeed of BSP and Yasir Rana of Congress.

In a triangular contest, the Muslim votes split up, consolidating the non-Muslims, and eventually costing the secular parties that seat.

The contest in Western UP, which the BJP swept in 2017, will be an interesting watch also because of the farmer's disappointment with the BJP. The large-scale protests by farmers of Western UP pushed the Central government to take back the three contentious farm laws. Still, the anger persists and this is harped on on by Akhilesh Yadav.

With the alliance of SP-RJD fighting the poll together, the BJP has an uphill task this time. The journey of Western UP doesn’t look as smooth as it was in 2017. Akhilesh Yadav has always called Owaisi a vote-cutter in UP politics. A party is called a vote-cutter if it gets more votes than the margin of defeat or if the vote base is similar to that of the defeated candidate. SP’s jailed MP Azam Khan, who is the Muslim face of the party, calls the AIMIM the 'B Team' of the BJP.

Owaisi on the other hand accuses the SP government of using Muslims only for vote bank politics, and keeping them poor and uneducated. He calls for the political, social and economic upliftment of Muslims of UP. Owaisi, at a time, also thought of striking an alliance with Mayawati’s BSP, but the alliance couldn’t be forged due to political reasons.

In Bihar, Owaisi’s AIMIM had put up candidates in one of Bihar's backward and Muslim dominated regions, the Seemanchal. Seemanchal has four districts: Purnia, Katihar, Kishanganj and Araria.

Out of the 24 seats on which Grand Secular Democratic Front contested, Owaisi was in the fray on 14 seats. The party won 5 but it severely affected the votes in other seats, which led to the Mahagathbandhan getting only 9 while the NDA got 6. Owaisi caused a severe blow to the prospects of Tejaswi Yadav’s chief ministership in Phase 3 of the elections.

Congress MLC Prem Chandra Mishra had said that the AIMIM indeed dented the Mahagathbandhan in Seemanchal region, causing losses to the alliance.

Such a scenario could easily be seen in UP too if the AIMIM fields minority candidates in Muslim-dominated constituencies, which will cause a dent in the SP-RLD vote share.