Significance of Modi-Trump meet at ASEAN Summit in Manila

The 'deepening and broadening' of India-US ties is to counter China’s circle of influence in the Asia-Pacific region and South China Sea.

Despite a big delay in the scheduled meet, Prime Minister Narendra Modi and president of the United States Donald Trump’s “bilateral meet” on the sidelines of the 31st ASEAN summit in Manila, the Philippines, is really the highlight of the prime minister’s historic visit to the city, 36 years after former PM Indira Gandhi’s. At the heart of the meet are the politics and geostrategic interests of the Indo-Pacific “Quadrilateral”, or the alliance involving India, United States, Japan and Australia to “counter” China’s circle of influence in the Southeast Asian region.

Along with national security and defence cooperation, Modi and Trump are interested in boosting free trade in the Indo-Pacific region, and the nomenclature itself – a shift from the earlier Asia-Pacific – is a sign of the times when New Delhi, with Washington’s blessings, is expected to play a bigger, more pivotal role, in the geopolitics of the region.

The much-awaited Modi-Trump meet came a day after official delegations met each other, including those from Japan, Australia and the US. The bilateral meeting on the sidelines of the ASEAN must be seen in conjunction with Ivanka Trump's scheduled visit in Hyderabad for the Global Entrepreneurship Summit.

The public statements indicate a cordial working relationship that have corroborated Washington's increased interest and reliance on New Delhi at a time of climate all pervasive suspicion and the threat if a nuclear showdown between North Korea and the US.

“I am happy that I have got another opportunity to meet President Trump. India-US ties are becoming broader and deeper and you too can feel that India-US ties can work together beyond the interest of India, for the future of Asia and for the welfare of the humanity in the world. Wherever President Trump has travelled in recent days and wherever he had an opportunity to speak on India, he has spoken optimistically and highly. I also assure that India will try its best to fulfil the expectations that the US and the world has from it,” PM Modi said in his opening statement for the meeting.

“PM Narendra Modi is here we had met at the White House before. He has become a friend of ours. He’s doing a great job. A lot of things were solved and we will continue to work together,” President Trump said at the meeting, according to reports.

Trump added that Modi was doing a “fantastic job by bringing lots of factions in India together that is what I hear and is a good news and lot of good reports are coming out of India".

Criticism of the quad

While the Quad is being lapped up by media in all the four countries – India, United States, Japan and Australia – critics of the move say this might be clever nomenclature to embroil India in matters that basically involve US hegemony in the Asia-Pacific region to counter China by propping up Japan (and Australia). While the Indian ministry of external affairs has said that the meet is about “a free open, prosperous and inclusive Indo-Pacific region [that] serves the long-term interests of all the countries in the region and the world at large”, China has countered this by saying it hopes that a “third party” won’t be hindered in the process, clearly meaning its own as well as Russian interests in the region. 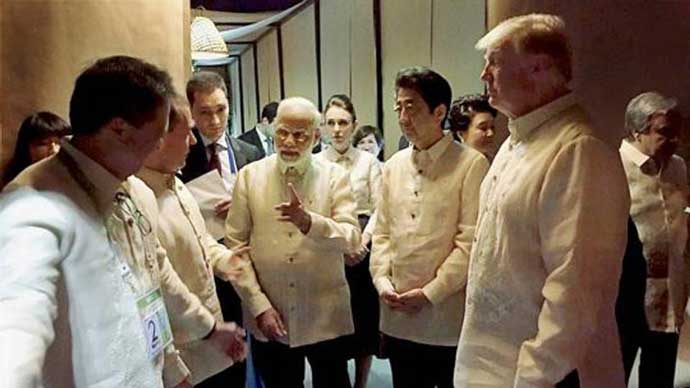 “PM Narendra Modi is here we had met at the White House before. He has become a friend of ours," US president Donald Trump has reportedly said. Photo: PTI

The Association of South-East Asian Nations (ASEAN) is a big regional bloc of 10 nations constituted in 1967, including Brunei, Cambodia, Laos, the Philippines, Myanmar, Vietnam, Malaysia, Singapore, Indonesia and Thailand. Along with India, China, Japan, Australia, Russia and the United States, the ASEAN bloc is a powerful and populous region, that together impacts how the bigger players interact with each other.

PM @narendramodi welcomed by President Rodrigo Duterte as he arrives to participate in the opening ceremony of the 31st ASEAN Summit in Manila pic.twitter.com/Pg9RL2o0S7

With world leaders at the Gala Dinner in Manila. pic.twitter.com/DY5s5Yjgdq

This year, being the ASEAN’s 50th anniversary, major multilateral and bilateral meets are part of the event that’s sure to prove historic in its tracing the emerging contours of India-China-Japan-US relationship. While Modi’s meeting with Trump is the cherry on the pie, his meetings with Japan’s Shinzo Abe, Australia’s Malcolm Turnbull and China’s Li Keqiang are in fact as important to determine and fine-tune India’s developing foreign ties in the dynamic Indo-Pacific region.

You would be happy to know that the @ASEAN opening ceremony included excerpts from the musical Rama Hari, based on the Ramayana. Various parts of the Ramayana were beautifully highlighted in the Rama Hari. This shows our deep historical bonds and shared heritage. pic.twitter.com/hLNQnSmmAs

Interacted with Indian scientists, students, researchers working at IRRI. India’s ICAR and IRRI have been cooperating for four decades. India is also involved in helping IRRI in strategic planning, helping decide key goals and working to overcome hunger as well as poverty. pic.twitter.com/7aHzo3VvjX

PM had earlier tweeted that his visit to Manila was about “India’s commitment to ASEAN” countries, and had shared images from a dance drama Rama Hari performed at the opening ceremony before the gala dinner on Sunday, November 12, night. Hosted by the Philippines president Rodrigo Duterte, images of Modi sharing a warm handshake with Trump, as well as with Abe, Duterte, Turnbull among others, have been tweeted out as well, indicating a build-up to significant possible understandings and agreements among the countries.

ASEAN-India and East Asia summits are scheduled for Tuesday, November 14, along with celebrations.

A raging issue – that of the Rohingya crisis – is missing from the ASEAN debates, which is a shame but not unexpected given the presence of Myanmar state counsellor Aung San Suu Kyi. Involving Myanmar, a key ASEAN state, this humanitarian disaster that’s at the heart of national security and human rights issues of the region, the Rohingya crisis is symptomatic of the apathy of big players like India, US and China, who could have used their diplomatic muscle to bring it to the table.

But clearly, an “embarrassment” for one ASEAN country on the 50th anniversary summit trumped over lives of Rohingyas fleeing military clampdown in Myanmar.

Also read: Why Pakistan is Austenistan and other delights