Asia Bibi verdict: Why blasphemy laws should have no place in naya Pakistan

The Supreme Court of Pakistan has reserved its judgment on the much hyped and sensational case of Asia Bibi, the 47-year-old Christian Pakistani on whom charges of blasphemy were slapped more than nine years ago on June 14, 2009. It was alleged that she had made blasphemous remarks against Prophet Muhammad.

In Pakistan, punishment for blasphemy is death and if at all the court awards a lenient verdict — reducing the death sentence to life imprisonment — the one on death row is unlikely to escape the mob frenzy.

Asia has been on the death row since November, 2010. Asia Bibi, with a Bible in her hand and her physically challenged child on her mind, is awaiting a verdict. (Photo: Indiatoday.in)

The Lahore High Court had earlier confirmed the death sentence, dashing the hopes of the verdict being commuted to a life sentence. Asia’s husband, Ashiq Mia, is running from pillar to post, trying to garner support for a reprieve and to create favourable public opinion. He even approached the Vatican and other international Catholic institutions for support. However, hope is slim, especially now that human rights activist Asma Jahangir is no more to plead Asia’s case.

Pakistan is bereft of bold voices that would air concern on such grim issues. One has to wonders if Malala Yousafzai, a Pakistani activist of international recognition, could mobilise substantial public opinion that would urge the international human rights activists, organisations and journalists to speak up for Asia Bibi. Appeals to Amnesty International have not worked.

Pakistan’s indifference towards liberal laws is well known. Former governor Salman Taseer was gunned down by his own bodyguard, Mumtaz Qadri on January 4, 2011 for being progressive, expressing anti-blasphemy laws stances and for defending Asia Bibi in court. His voice was stifled by a 22-year-old radicalised youth. Qadri turned into a hero overnight and was commended for silencing an anti-blasphemy law man. Incidents like these highlight how deep religious fundamentalism runs in the country. 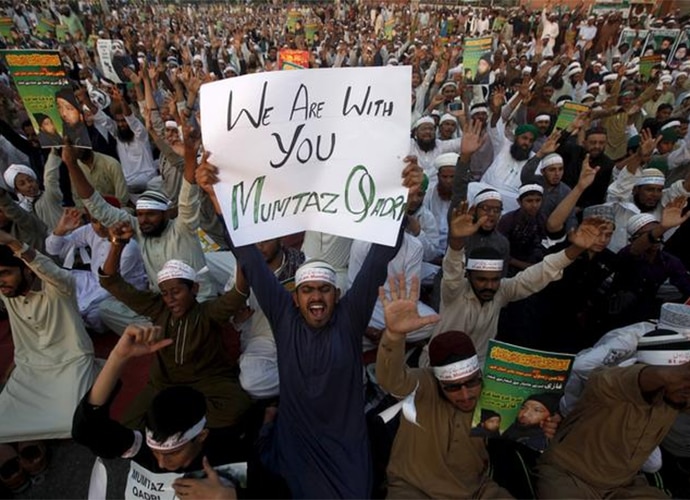 Qadri turned into a hero overnight and was commended for silencing an anti-blasphemy law man. (Photo: Reuters)

Qadri’s trial proceedings too were a nightmare for the authorities. Of course, after he was executed, floral tributes were paid to him the general public ascended him to a martyr-like status. A major chunk of the Pakistani society is venomously regressive and has no tolerance for anything that challenges their religious beliefs and unless their mindset changes, relaxation of stringent laws will remain a tough challenge. That being said, there exist saner and forward-thinking people in the country, but incidents like these discourage them from openly asserting their views, for the fear of either being ostracised or being harassed — legally as well — is very real. The judiciary too is helpless.

One has to wonder — Bangladesh that was once part of Pakistan has progressed rather well since its inception 47 years ago. Secularists, liberals and progressives enjoy a fair amount of say in the society; they have helped in shaping public opinion through the dynamism of theatre, films, literature, media and use of intelligentsia. Yet, Pakistan — independence more than 70 years —has not made much visible strides. What happened to grand visions of a naya Pakistan? (Photo: Reuters)

Meanwhile, as Asia Bibi’s mercy petition is under submission, her fate hangs in balance and the judgment is reserved by the Supreme Court. Interestingly, during the trial, Justice Iqbal Hameed Ur Rehman, one of three members of the Supreme Court bench recused himself from the hearing, stating that he was the judge who had heard the case of Salman Taseer’s assassination. According to Justice Mian Saqib Nisar of the Supreme Court, Justice Rahman believed that his presence in the bench may prejudice Asia Bibi’s case as it was closely linked to Salman Taseer. It is, therefore, clearly evident that judges are applying themselves on the merits of the case.

It’s time Pakistan undergoes some radical judicial reforms, especially on the laws of blasphemy focusing on 295C of the Pakistan Penal Code, which is in violation of Pakistan’s obligations to respect the rights to life, to a fair trial and to prohibit torture and other cruel, inhuman degrading treatment or punishment.

Now that Imran Khan is at the helm with visions of a naya Pakistan, isn’t it imperative he undertake judicial reforms to address humanitarian issues?

In the meantime, Asia Bibi, with a Bible in her hand and thoughts of her physically challenged child in her mind, is awaiting a verdict; one that is cloaked in suspense.

Also read: Why Pakistanis must speak up against blasphemy laws