Asia Bibi: Despite best intentions, will Imran Khan be able to quell protests over blasphemy acquittal?

In a historic judgment by the Supreme Court of Pakistan, the 47-year-old Christian woman, charged with blasphemy in 2010, was acquitted of all allegations and ordered to be set free.

A three-member Supreme Court bench, headed by Chief Justice Mian Saqib Nisar, on October 31 pronounced the judgment, giving a fresh lease of life to Asia Bibi and succour to her family members who have been frantically running around contacting various international institutions, including the Vatican, to intervene and save Bibi from the gallows. In Pakistan, the punishment for blasphemy is death.

However, as the public opinion in Pakistan is averse to any judicial leniency towards persons charged with blasphemy, religious clerics and extremists have immediately taken to streets, blocking highways and violently protesting against the verdict. This was anticipated as majority of the people are generally easily reconcilable with bigotry and turn violent at the slightest provocation. 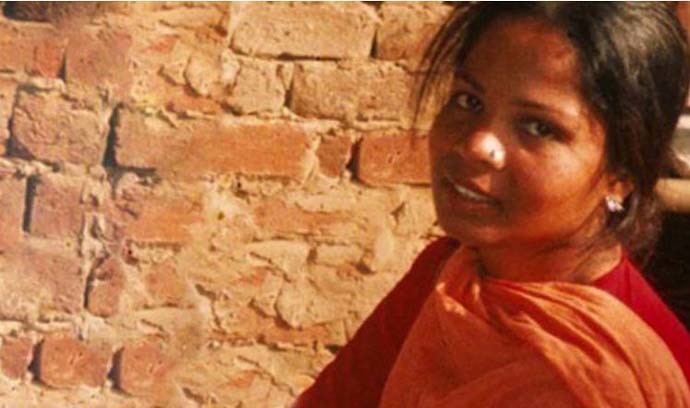 Forty-seven-year-old Asia Bibi, charged with blasphemy in 2010, was acquitted of all allegations and ordered to be set free recently. (Credit: Agency File photo)

The religious groups had already warned the judges of extreme consequences should they give any verdict other than awarding death. In the prevailing scenario, the law and order situation looks fairly explosive as cities like Karachi, Islamabad and Lahore have already witnessed a few violent protests, leading to long traffic jams.

Intelligence sources are on high alert and working in close conjunction with the army. 'Hero' of the day, however, was Prime Minister Imran Khan who was very prompt in addressing the nation on October 31 itself, calling for peace and maintaining order. His articulation in addressing the Pakistanis was marked with appeals, what appeared to be sincere, to not to harm the judges who have acquitted Asia Bibi. He also urged the people not to resort to any form of violence.

Khan was forthright in his address by saying that the underprivileged and minorities in Pakistan should be protected and the agitators should not, under any circumstances, clash with the verdict.

Further, Khan assured that lives and properties will be protected by the government. His timely speech is described as bold and direct and also implies that he is unafraid of divisive and parochial forces, as of now. Importantly, Prime Minister Khan has taken the armed forces into full confidence and it appears that he wants to signal that he means business and is in no mood to tolerate nonsense as seen by his assertive body language and words. Supporters of the Islamist party Tehreek-e-Labbaik at a demonstration this month in Lahore, Pakistan. (Credit: AP photo)

He held a long meeting with the Chief Of the Army Staff, General Qamar Javed Bajwa, discussing the situation arising out of the judicial verdict. This shows two aspects — firstly, he and the Army are on the same page and both are serious about handling the situation.

Secondly, both are working in unison to protect the minorities, contrary to the general belief. Also, they are keeping the sanctity an institution like the judiciary intact so as to keep religious extremists in check. This seems, at least for now, a healthy sign. But this momentum needs to be kept without any sense of complacency. Meanwhile, in a disturbing development, Tehreek-I-Labbaik (TLP) has called for a mutiny against the Army’s top brass and issued death threats to leading judges. Also, the Jamiat-Ulema-e-Islam Fazal has threatened to proceed on nationwide protests against the judgment. These two organisations are full of fanatics with zero-tolerance for other religions. The Chief Justice of Pakistan and his colleagues also deserve credit for the tenor of their judgment, involving a fine piece of literature, legal intellect and wisdom.

For example, the judgment read: “...it is a well settled principle of law that one who makes an assertion has to prove it. Thus, the onus rests on the prosecution to prove guilt of the accused beyond reasonable doubt throughout the trial. Presumption of innocence remains throughout the case until such time the prosecution on the evidence satisfies the court beyond reasonable doubt that the accused is guilty of the offence alleged against him". Pakistan Prime Minister Imran Khan in his address after the verdict said the underprivileged and minorities in Pakistan should be protected. (Credit: Twitter)

Another judge, Justice Asif Saeed Khan Khosa stated: "Blasphemy is a serious offence but the insult of the appellant’s religion and religious sensibilities by the complainant party and then mixing truth with falsehood in the name of the Holy Prophet Muhammad (Peace Be Upon Him) was also not short of being blasphemous."

The judgment also stated: “It's ironic that in the Arabic language the appellant’s name Asia means ‘sinful'. But in the circumstances of the present case she appears to be a person, in the words of Shakespeare’s King Lear, ‘more sinned against than sinning’.” While the Pakistan government is closely watching the situation, the zealots — who are up in arms against the acquittal — are an unpredictable lot. Such forces are well capable of abetting lawlessness, undermining any attempt by PM Khan to stem religious bigotry and be seen as a protector of the minorities.