At a time when we are asking a foreign nation, our neighbour, to stop promoting terrorism in India, we have a visitor who allegedly ordered one grisly murder and dismemberment on soil outside the borders of his nation.

Yes, I refer to the crown prince of Saudi Arabia, Mohammad-bin-Salman, our honoured state guest, about whom US intelligence and the world has reportedly concluded that he ordered the murder on October 2 last year of Jamal Khashoggi, a well-known Saudi journalist and a Washington Post columnist.

Khashoggi was once a supporter of the monarchy, then a critic who lived in the US in fear of his home country. His end came when he walked into the Saudi consulate in Istanbul to complete some paperwork involving his divorce so that he could remarry. He disappeared and the world was horrified ever since Turkish authorities claimed he was killed by a Saudi assassination squad that flew in from Riyadh — with a chainsaw that dismembered his body.

The world was forced yet again to take note of Saudi depravations and the sense of impunity with which they operate across the world, thanks to their petrodollars and a strategic alliance with the US. President Donald Trump is, however, reportedly “pissed” with the crown prince, but he’s done nothing serious against Saudi Arabia either. The Jamal Khashoggi murder has soured relations between the US and Saudi Arabia. (Photo: Reuters)

Meanwhile, the prince (referred to as MBS in Western media) has begun a tour of Asia, to recover his “lost honour”, say news outlets, and recover the shreds of a reputation. He comes to India after Pakistan and will subsequently head to China. The influential Al Jazeera platform did a detailed story on how the MBS travels are designed to show the US that Saudi Arabia does not survive only at their mercy. But it does, besides the petroleum on which it floats, generating dollars and spreading its intolerant version of Islam across the world.

The nation that the Saudis absolutely loathe is Iran — its only rival in the region.

Forty years ago, in February 1979, one of the major political events of the last century took place in the form of the Iranian Revolution. Decades later, Iran fascinates the world because it seems impenetrable, is beset with economic problems, yet it has the capacity to hold out against the implacable hatred of the US (whose current President Donald Trump has threatened war and reneging on a nuclear deal signed by his predecessor).

In the region, Iran not only holds out against cash-rich Saudi Arabia — but also against the tiny but potent state of Israel that would seek to crush the only surviving regime in volatile West Asia that continues to support movements against its existence. The nation that the Saudis absolutely loathe is Iran. (Photo: Reuters)

That is why newspapers across the world wrote editorials on the 40th anniversary of the Iranian Revolution. But when it comes to Iran, most commentators have to write without visiting the county post-Revolution because they could be US citizens who would not get visas or they may be Iranian exiles who cannot return.

Indians, should they ever chose to report on the country, have an advantage due to old civilizational links and continued friendly relations with Iran. We can get visas and, as I managed two years ago, innovate once there to get some genuine reporting done.

Less than two years ago, I was part of a delegation of Indian journalists invited by the Tehran foreign office and taken to the Chabahar port that India is building for Iran. In the process, I managed to activate other contacts among the students from across the world, including India, studying theology in the city of Quom — the centre of clerical power in a nation ruled by clerics.

I did indeed meet the children of the Revolution. I met a powerful woman named Masoumeh Ebtekar, who had in 1979 been the main spokesperson for the group of students who took over the US Embassy in Tehran and held 52 American diplomats hostage for 444 days from November 4, 1979, to January 20, 1981.

She never had to apologise for her part in the Embassy siege as even today, the Iranian regime views America as the great Satan or Shaitan, a Persian origin word that we quite understand in Hindustani. Forty years later, Ebtekar is one of the four vice presidents of Iran and the most powerful woman in the Islamic republic. When we met her, she spoke of Iran’s current problems and the position of women and did not speak of the days of the Revolution. She spoke perfect English because her story is this — her father studied at the University of Pennsylvania and she lived with her parents in the US for six years.

But she would return to Iran, enrol in university — and become influenced by the ideas of Ali Shariati, who focused on the sociology of religion and is considered one of the important Iranian intellectuals of the 20th century. That’s when Ebtekar covered herself with a chador, revealing only her face, as she continues to today.

Masoumeh Ebtekar had briefly considered running for the presidential election in 2009 but decided against it. Broadly, she said that a certain ambiguity remains in the Constitution and the Guardian Council has said that there is no legal restraint against a woman running for president.

Yet, till now, they have never cleared a woman candidate and many do apply. Iranian women are in fact among the most educated in the region with an 83 per cent literacy rate. They have one of the highest participation in sciences. Indeed, each year, 60 per cent of seats in universities in all streams are filled by women who make up half the faculties as well. 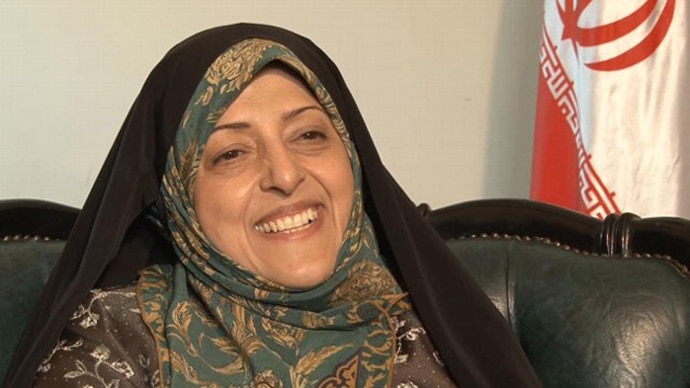 In 1979, Masoumeh Ebtekar was the main spokesperson for the students who took over the US Embassy in Tehran. (Photo: Reuters)

But Iran will remain a nation under siege since the regime that has now survived 40 years has held the US responsible for the problems across the world and region.

Dramatic wall paintings across Tehran openly denigrate the US. My official itinerary in Tehran did not include a visit to the US Embassy — abandoned since January 20, 1981, when American hostages left after 444 days. The Embassy compound is in the heart of Tehran, a reminder of the past.

I decided to go off schedule for a while and explore the Embassy — and I shall never forget the visit. The painted signs on the walls said in Persian “Oh Amrika, we will crush you under the soles of our feet.” In the badly maintained garden of the Embassy, there were a few posters in English, mounted as if in a garden exhibition. They made statements such as “Human Rights only for Whites?” and “United States of Saudi-Israeli America”. A sign called it the “Museum Garden of Anti-Arrogance”.

The building itself was called 13 Aban Museum, marking the day on the Islamic calendar when students took over the Embassy. Inside, rooms and equipment had signs such as “secret and spying section of Embassy”, “document destroying room” and so on.

Every now and then, when we cast our gaze outside our region and glance at the world beyond Pakistan, we can ignore neither Iran nor Saudi Arabia.

One thrives because of a special pact with the US — the other survives in spite of its dogged position against what it calls American imperialism.