National Register of Citizens in Assam can trigger a humanitarian crisis

At the heart of the student movement in Assam in the early 1980s was the move to get Bengali Muslim immigrants out of the state and delete their names from the state’s electoral rolls. At the time, BJP leaders Atal Bihari Vajpayee, Jaswant Singh and LK Advani paid regular visits to Assam to support the students’ demand. The RSS, too, seeing the anti-Muslim mood in the state, began working quietly behind the scenes to spread its ideology.

The All Assam Students Union (AASU) and the BJP were on the same page owing to the fear that Assam’s demographic pattern could change because of the illegal influx of Bangladeshi Muslims, turning it into India’s second Muslim majority state (after Kashmir). Second, the Congress party kept winning elections because illegal immigrants voted the party into power.

Simply put, Bangladeshis were on the electoral rolls and formed the Congress’ vote bank. Not much has changed in the decades since.

In 1985, a settlement was negotiated between student leaders and the Rajiv Gandhi-led Congress government, and the former launched their regional party, the Asom Gana Parishad (AGP). 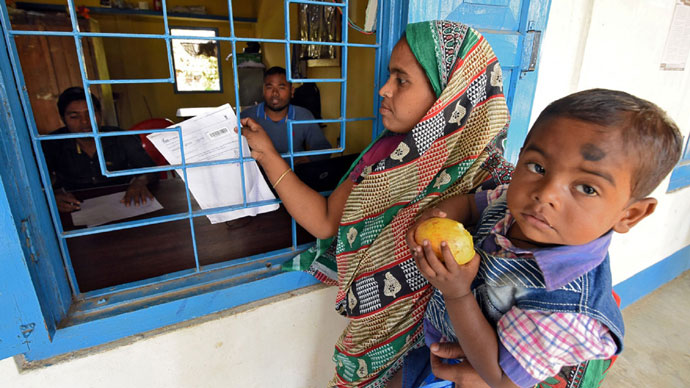 Simply put, Bangladeshis were on the electoral rolls and formed the Congress’ vote bank. Not much has changed in the decades since. Photo: Reuters

Today, the BJP and the AGP often use the same language.

The Assam Accord, laid down that all those who entered the state after March 25, 1971, are foreigners, and must be identified and deported back to Bangladesh. Those settled in Assam before that date would be considered Indian citizens.

Detecting and deporting so called foreigners is a tough ask. The AGP, which came to power on the pledge of relieving Assam of Bangladeshis, realised how difficult the exercise was.

The National Register of Citizens (NRC), on the face of it is an excellent idea for border areas and would help in assuaging the anxiety of the local Assamese worried about the influx of migrants. It was not introduced by the BJP. The decision to form a register of Indian citizens of Assam was taken in 1951 after the first Census. However, not much was done. It was revived again in 2014, with the idea of upgrading the NRC. The first draft of the register was published on December 31, 2017 on the instruction of the Supreme Court. There are many anomalies in the first draft which, government officials have time and again stressed, can be corrected.

What is needed, however, is proof that a citizen’s ancestors’ names were in the 1951 census, or in the electoral rolls, or land papers. All this was very well for the educated, even though many among them were running from pillar to post to get their long lost documents. However, for the poor and illiterate, these problems are often insurmountable. Many have no papers, neither are their names on voter lists nor are their forefathers registered.

While some of them may genuinely be foreign nationals, many genuine citizens, too, may not possess any documentary evidence to prove their citizenship. Harrowing tales are coming in every day of genuine Bengali speaking Muslims being targeted as foreign nationals. With the prevalent anti-immigrant mood in the state, officials are quick to band every Bengali-speaking Muslim as a Bangladeshi, provided the citizen does not possess the necessary documents.

The BJP’s support for the NRC is natural. No political party can object to illegal foreigners being sent out of the state. But for the BJP/RSS it is also part of their ideology; their belief that Muslims reproduce fast and should be stopped. If they are in Assam, the minorities will be thrown out.

Everyone knows how the system can discriminate against Muslims, and this is bound to happen. More stories of hapless Bengali Muslims will surface as cross verification by the officials of the NRC continues.

The fact is, the numbers of illegal entrants are not conclusive. The fact is, since the Assam agitation largescale migration from Bangladesh has not been easy. During the 1971 India-Pakistan war, refugees poured into the northeastern states of India and many stayed back in the country after Bangladesh was created. Hindus, especially, did not return. While the Assamese claim that immigration is continuing unabated, others say that if new settlers are spotted in a district, they are basically those moving from one part of the state to the other.

During British rule, the colonisers got hardworking Bengali Muslims into the Brahmaputra valley to clear Assam’s malarial swamps and turn them into fertile agricultural land. The valley has been converted into a rich rice bowl for the country. Much of the problem in the past was that the land holdings of indigenous Assamese were gradually reduced as more and more Bengali Muslims bought agricultural land in rural areas. Land is at the heart of the immigrant issue in Assam and it was also a plank on which the student movement got overwhelming support from both rural and urban areas. Essentially, assamese resentment against Bangladeshi Muslims stems from shrinking land holdings.

While the BJP has happily gone along with the AGP over Bengali Muslim immigrants, their views do not coincide on Hindu Bengalis.Anti-Bengali Hindu sentiment, too, is rampant in Assam. This is because Prime Minister Narendra Modi had announced that Bengali Hindu refugees from Bangladesh would always find a home in India. Some of them will also have to be accommodated in Assam.

Before the anti-immigrant agitation took the state by storm, clashes in Assam were mainly between the local Assamese and the Bengali-speaking settlers. Just after Independence, the Bengali-speaking population of the state, because of taking to an English education much earlier than citizens of other states of British India, held the majority of state and central government jobs.

At the time, this led to attacks on members of the community. While the numbers of Bengalis in Assam government rolls have hugely reduced, the animosity continues.

It was PM’s announcement that gave it a fresh spurt.

The NRC and its aftermath will take a toll on India’s cordial relations with Bangladesh. Dhaka, under Shiekh Hasina, has been an exemplary friend to India. At the end of the process of upgrading the NRC, what happens to those branded as foreigners, who must be repatriated? Dhaka’s position is that there is no illegal influx of Bangladeshis into India — that it will accept only those who New Delhi can prove are illegal immigrants.

So, what happens to these people? Will they become like the stateless Rohingyas of Myanmar who nobody wants to touch?

The NRC may just trigger a major humanitarian and diplomatic crisis in future.