Many poor ethnic Bengalis live with everyday apprehensions of being turned a ‘D-voter’, or ‘doubtful citizens’ in their own country.

On Wednesday morning, 31-year-old Moinal Mollah finally walked out from the detention camp in Goalpara, Assam, where he was languishing for nearly three years since September, 2013. He was earlier declared a foreigner, citizen of Bangladesh by a foreigners’ tribunal in Barpeta in an ex-parte judgement.

Can you imagine Indians being suspected as illegal Bangladeshi foreigners in their own country, practically arrested and left to rot in detention camps by their own police and government?

For people outside northeast, particularly Assam, it might appear absurd that the citizen of a country has to go to court to prove his nationality, but it is a harassment that many ethnic Bengalis of Assam have to go through on a regular basis.

They live with the everyday apprehensions of being turned a "D-voter", or "doubtful citizens" who then have to produce legal documents to prove their citizenship.

The roots of Mollah’s travails began in September 1997 when his entire family, he and his parents, were marked D-voters or doubtful citizens by the electoral verification officer apparently because he was not satisfied with their documents.

Luckily, his parents had all the requisite papers, particularly land deeds, NRC (National Register of Citizens) certificates, and names in electoral list in elections held earlier, besides other supporting documents. In November 2003, both his parents were finally declared Indian citizens by the Illegal Migrants (Determination) Tribunal of Barpeta.

Young Moinal’s case did not come up for hearing then and the family was leading normal life. He got married and has two children and was working as a labourer in Guwahati while his family lived in the village in Barpeta. 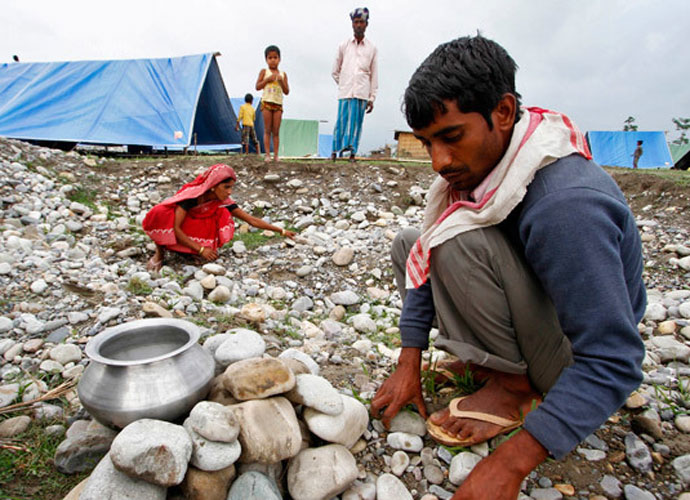 Can you imagine Indians being suspected as illegal Bangladeshi foreigners in their own country?

Later, IMDT was scrapped and all pending cases were automatically transferred to the Foreigners Tribunal. His case finally came up for hearing in 2007.

Mollah duly appeared before the tribunal on receiving summon, once in July and twice in September of that year. But his legal counsel gave him ill-conceived advice that since both his parents are Indian citizens and have all necessary documents, he should not bother.

Out of ignorance and misleading legal counsel, he stopped appearing before the tribunal subsequently. Mollah, it must be mentioned, is a poor labourer who does not have even basic education.

The Foreigners Tribunal of Barpeta gave an ex parte judgement in February, 2010 pronouncing him a foreigner, and consequently an illegal migrant who entered India after 25 March, 1971.

The Assam Accord puts March 24, 1971 as the "cut off day" and those who came earlier than that day or their successors are considered citizens of India.

Shocked, Mollah appealed in the Guwahati High Court, besides filing a complaint against his counsel in the Bar Council and making him a party in the case.

He filed three separate petitions in the HC but on each occasion, judgment came against him as the court questioned his failure to produce documents in the tribunal on time and consequently ordered his deportation.

In September 2013, he was finally arrested by police and sent to detention camp of Goalpara. His parents and wife had lost all hopes of his release till August last year.

Despite all the hardships that the family faced, Mollah is still lucky as a Guwahati-based rights group of Muslim youths, MY FACTS, came forward and raised some money through social media campaigns.

MY FACTS' members and advocates - Aman Wadud and Syed Burhanur Rahman - took up his case and filed a petition in the Supreme Court.

On October 12, last year, senior advocate Raju Ramachandran argued on behalf of Mollah, after which the apex court stayed his deportation and issued notices to the central and state governments.

Finally on July 12, the SC had directed the tribunal to give Mollah a second opportunity and asked him to appear before the tribunal and file written statement within four weeks.

On August 1, Wadud and Rahman appeared in front of the tribunal on behalf of Mollah after which the tribunal ordered for his release and asked him to submit a surety bond to the Superintendent of Police to remain free.

The foreigners’ tribunal has fixed August 11 for the recording of his written statement. According to his lawyers, the trial may continue for few more months, but they are now confident of positive outcome.

While Mollah’s story appears to have a happy ending, there are many who do not have the same luck. Days before the Assembly elections in the state, Bulu Shabdakar, a daily wage labourer from Silchar in Barak valley, died in one such detention camp.

In 1997, the Election Commission marked 3.7 lakh persons as D-voters in electoral roll revision. About 1.99 lakh of these cases were referred to 100 Foreigners’ Tribunals spread across the state.

There are still about 136,448 persons marked as D-voters, most of whom have been sent to six temporary detention camps or centres after the 2004 Guwahati HC order directing D-voters to remain in camps until their cases are settled.

Due to large number of people in these camps, government is now planning to build permanent detention centre. The state has 500 special units of police for detecting foreigners.

Also read: Why are Muslims in Assam still seen as outsiders?

It needs to be mentioned here that according to a white paper published by the Assam government in October 2012, more than 92 per cent of the resolved cases of D-voters are genuine Indian nationals.

According to the Assam government, since 1985, Foreigners’ Tribunals have declared as many as 38,186 as foreigners who had illegally entered Assam from Bangladesh. However, over 38,000 of them are either absconding or died, then minister for Assam Accord implementation informed the state Assembly in March 2015.

There are reports of D-voters who are working as teachers in government schools, and hence during every elections, they have election duty.

They help others cast their votes, but they are not allowed to vote themselves. Take the example of Sahjahan Kaji of Barpeta, who claims to have even all the documents including most important 1951 NRC certificate of his father.

There are people who show land documents of British era in name of their forefathers but their names have been put in the D-voter category as well. A number of families accuse the officials of asking for bribes to clear their names.

Further one needs to understand that most of the people are very poor and illiterate, and so may not always have legal documents. In fact, if possession of legal documents would be the only criteria of proving citizenry in a country like India, many people in remote regions may not be able to prove their citizenship. At times, people like Mollah are thus being made to suffer due to pervasive political rhetoric over illegal migration.

Poor mostly suffer due to political rhetoric over foreigners

The question of foreigners is a sensitive issue in Assam and due to continued identity politics, lakhs of genuine Indian citizens, who are often uneducated and poor, have to suffer.

To be sure, D-voters was not in reality a communal issue and more than half of those suspected are actually Bengali Hindus, who were forced to migrate from what is now Bangladesh in different stages.

One of the poll promises of the BJP during 2014 general elections, and also during recent Assembly elections, have been to grant Indian citizenships to minority Hindus and Sikhs or Christians, who are forced to migrate from neighbouring Bangladesh, Pakistan or Afghanistan.

While there have been too many statements and claims, even Bengali Hindus have not got any reprieve so far.

The Assam coordinator of the NRC updating process, Proteek Hajela, recently told media that they have not got any official order of granting citizenship to Hindu refugees from Bangladesh.

Meanwhile, there is apprehension that that the issue of D-voters may be reduced to a mere communal problem and the Na-Asamiya Muslims, particularly of Bengali origin, will continue to be victimised.

Moreover, it is unlikely that Bangladesh would willingly accept most of these poorer people as their citizens without any valid documents, except perhaps a handful who came very recently; and hence their deportation would remain a tedious task.

Hopefully, the ongoing updating process of the National Register of Citizens (NRC) would clear the air and for once end the harassment of Indian citizens.

#Migrants, #Refugees, #Assam
The views and opinions expressed in this article are those of the authors and do not necessarily reflect the official policy or position of DailyO.in or the India Today Group. The writers are solely responsible for any claims arising out of the contents of this article.