Coming to power in three states will also help in filling up its depleted coffers.

To what extent are state Assembly elections a predictor of general elections?

This is the big question everyone has in mind following the Congress’ superb performance in the recent Assembly elections in Chhattisgarh, Madhya Pradesh and Rajasthan.

There is the past.

In 2003, the BJP won the state Assembly elections to these three states and yet lost the Lok Sabha poll in 2004. Likewise, the Congress lost Madhya Pradesh and Chhattisgarh in the 2008 Assembly polls (they did win Rajasthan) and yet they won the Lok Sabha poll. 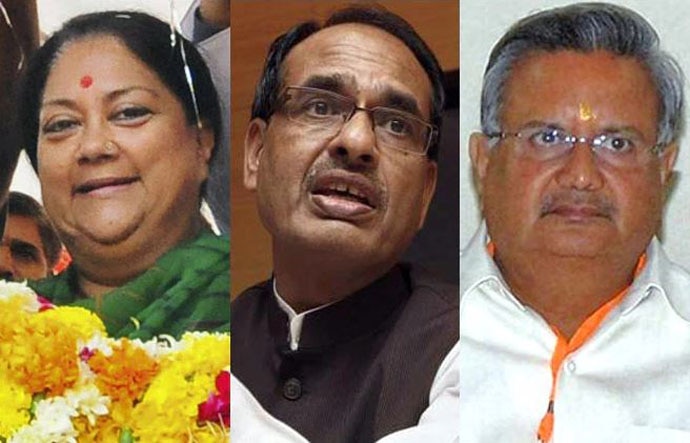 Getting an answer to the question really rests on an assessment of why the BJP fared badly in the state Assembly polls.

The common answer would be anti-incumbency.

After all, across the democratic world, electors tire of leaders in, at the most, ten years.

But Raman Singh had been CM for 15 years and Shivraj Chouhan for 13. But it would be churlish not to give credit to Congress leaders like Ashok Gehlot and Sachin Pilot in Rajasthan, Kamal Nath and Jyotiraditya Scindia in Madhya Pradesh, and in Chhattisgarh.

More important was the coming of age of the party’s top leader, “young” Rahul Gandhi. His low-key, can-do approach made a significant difference.

A third factor being spoken about is “rural distress”— farmers were unhappy, as indicated by the party’s greater loss in the countryside.

A fourth factor highlighted by India Spend is that in Chhattisgarh, MP and Rajasthan, where 43, 36 and 30 per cent of the seats respectively are reserved for SCs and STs, the BJP did not do too well. Across the three states, they lost 120 or 66 per cent of the 180 reserved seats as against the 77 they had won in 2013.

Equally telling is the fifth issue brought out by The Print in revealing that the party won only 46 per cent of the 80 urban seats, down from the 80 per cent they had won in 2013.

While losses in the countryside could be put down to “rural distress”, the erosion in the urban areas which voted strongly for the party earlier is a danger signal.

Demonetisation, the poor roll-out of the GST, as well as anti-incumbency seems to have dented the appeal of the party.

In the recent Assembly poll in Gujarat, the BJP faced strong headwinds, but was able to triumph once again because of the solid support it got from its urban constituency. 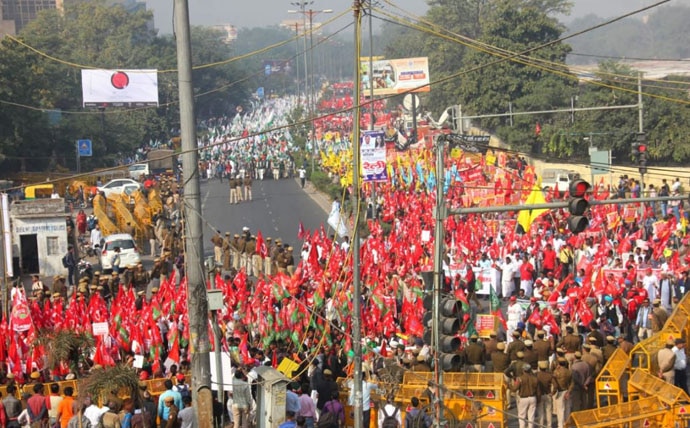 Agrarian crisis is another factor. But the BJP didn't do well in urban seats as well. (Photo: Twitter/@AIKS)

Nationally, Modi had generated enormous support among the young and aspirational for his agenda of development and promotion of a range of transformational initiatives, like StartUP India, Skill India, StandUp India, Pradhan Mantri Kaushal Vikas Yojna, Smart Cities mission, AMRUT and so on.

However, outcomes in most of these have been indifferent and many schemes are yet to get off the ground.

In the meantime, the economy has simply not been able to provide 10 million jobs per annum that Modi had talked of in his election campaign in 2014.

In fact, CMIE figures show that the number of formally employed Indians actually fell in the period 2017-2018. The government claimed that 3.11 million jobs were added between September 2017 and February 2018, while CMIE figures put the figure at 1.8 million for 2017.

Indeed, the CMIE data shows that new investment projects went down by 38.4 per cent in the financial year 2018 and the completion of new ones fell by 26.8 per cent over the previous year. FDI declined by 15 per cent. An indicator of just how fraught the situation was is brought out by the fact that when the Indian Railways advertised for 90,000 jobs, they got 23 million applications. Things have not been too good in FY 2019 either. Coming to power in three states will help Congress in filling up its depleted coffers. (Photo: Reuters)

All these issues will be in play in the 2019 Lok Sabha elections. The period now and then is too short for the Congress Party to be expected to deliver on promises. This is perhaps to its advantage because fulfilling some of those would not be easy. Perhaps, the most important outcome of the election was that it gave a lifeline to the Congress, which was floundering in the face of repeated defeats.

Coming to power in three states will also help in filling up its depleted coffers, something that will be very important when it faces the cash-rich BJP in the 2019 contest. But far more important is the sense of confidence and “can do” spirit the state Assembly results would have given to Rahul Gandhi’s neophyte leadership and the Congress party.

Also Read: Leaders are quitting the BJP one by one. Is the ship finally sinking?