From Maharashtra to Jharkhand: Wrong to blame BJP for allies drifting away

Ever since the Shiv Sena went alone in the 2014 Maharashtra Assembly elections, it has been one of the fiercest critics of the BJP. Since then, the BJP has been playing down the rift that finds documentary evidence in Sena mouthpiece Saamna almost every morning.

Devendra Fadnavis ensured he didn't lose his cool with the Sena till the governor passed the baton with the responsibility to form the government from the BJP to next party - Shiv Sena in this case. When it started to appear that an 'unnatural' alliance between the Congress, Nationalist Congress Party and Shiv Sena couldn't be formed, the BJP naturally softened its tone towards the Sena that has been pretty scathing in its attacks on the BJP.

The BJP would have tried, but it is impossible that it has forgotten that one of the leaders who joined Rahul Gandhi's chorus of 'Chowkidar chor hai' in the run-up to 2019 Lok Sabha elections was Sena pramukh Uddhav Thackeray.The BJP has still been blamed for not being able to keep alliance partners together. Many comparisons are being drawn between the current anti-BJPism and the anti-Congressism of the 1980s. There is only thing common between the two. Congress then and BJP now are so strong that the space for other parties has shrunk to the point that in some states, it barely exists. What will the regional players do if not oppose the BJP?

It was Atal Bihari Vajpayee who first raised the issue of BJP's untouchability in 1996. Many have called it Vajpayee's ability to work with others, taking everyone along. His speech made during the confidence motion he brought in is hailed as one that melted hearts and made others see reason in joining forces with the BJP.

Remember, Shiv Sena has not changed, but Congress is considering an alliance with the party because Maharashtra is a cash-rich state. Staying in power in the western Indian state justifies putting up with some arrogance and lots of communalism.

Vajpayee was once a political pariah for many of those who later outlawed their own untouchability towards the BJP. He became huggable as a secular leader in the mid 1990s because he presented an alternative to the Congress after all kinds of fronts failed on all fronts in running the country.

What is happening in Maharashtra is not BJP's fault. Amit Shah and Narendra Modi may or may not be arrogant, but if arrogance was a yardstick for political tie-ups, would Mayawati ever have found an ally? 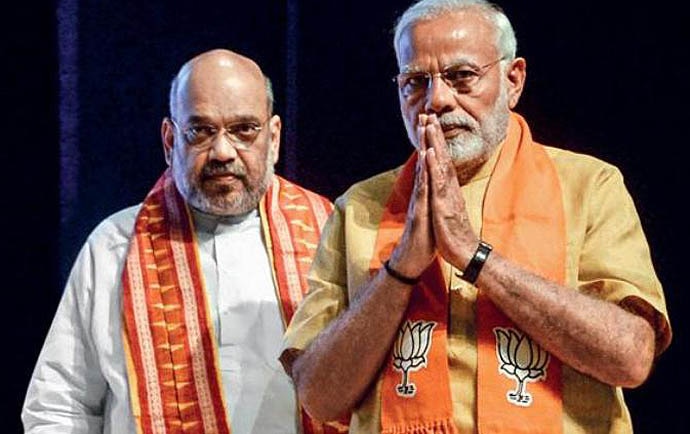 Amit Shah and Narendra Modi are accused of being arrogant towards their political friends and foes. (Photo: India Today)

Political arrogance is a measure of political power. It was just in 2014 that senior Congress leaders such as P Chidambaram and Pranab Mukherjee were accused of being arrogant

When Trinamool Congress' Mamata Banerjee became railways minister, it was said thatt people covering the ministry would have a tough time getting comments from her. Her mercurial nature has been unsparing of both political friends and foes. And yet, Banerjee emerged as the magnet of sorts to drive parties together ahead of the 2019 general elections.

As Jharkhand gears up to be the third state to go to polls after the Lok Sabha elections, there are talks of BJP failing to keep alliance partners together. The All Jharkhand Students Union (AJSU), with which the national party ran the government from 2014 to 2019, announced three candidates to fight directly against the BJP, after failing to reach a deal.

AJSU managed to get its first ever seat in Lok Sabha this year after the two parties contested together.

The Janata Dal (United), BJP's Bihar ally, is contesting the Jharkhand elections alone, as is the Lok Janshakti Party (LJP), whose leader Ram Vilas Paswan is a Cabinet minister in the Modi government.

The JD(U) had refused to join the Modi government despite being its ally.

None of these parties are moving out of the alliance because of something the BJP did, but because they want to grow individually as parties.

It is wrong to blame the BJP for any of this.