From samosas to Lahori fish, nothing will taste the same without Atal Bihari Vajpayee’s company

Atal Bihari Vajpayee stood out after Indira Gandhi as the only prime minister who loved food and understood it like a gourmet. Mrs Gandhi, though a light eater, was partial towards fine food in the French tradition — she was responsible for overhauling the high table at Rashtrapati Bhawan (with a lot of help from Begum Abida Ahmed, wife of Fakhruddin Ali Ahmed, the late president notorious for signing the Emergency declaration) and Hyderabad House, and she would personally proof-read menus at all state banquets so that the French names were not messed up with.

Being a man of the masses, Vajpayee had a more eclectic taste. From the stuffed and fried paranthas of Chandni Chowk’s famed Paranthe Wali Gali, which brought back memories of his father’s ancestral village near Agra, where the families of Shiv Charan Doneriya (of Pandit Daya Prasad Shiv Charan fame) and other paranthawalas come from, to the tandoori salmon his favourite chef, Hemant Oberoi (formerly of the Taj Group), would prepare for him, he revelled in eating well (and celebrating the soft power of Indian gastronomy).

I remember my political colleagues, even those who were ideologically opposed to the BJP, saying how it was a pleasure to cover the party press conferences in the days when Vajpayee was at the helm of the nation. After getting used to the soulless tea served at the AICC headquarters, the delicious samosas and jalebis from Chandni Chowk at the end of BJP pressers came as a welcome relief. It also reflected the warmth and hospitality that characterised politics in the Vajpayee era. 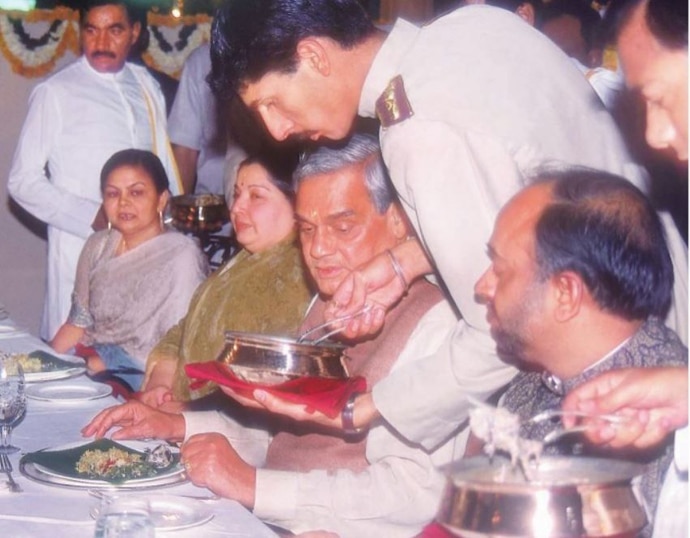 Being a man of the masses, Vajpayee had an eclectic taste. (Photo: Mail Today)

Those were the early days of the Page Three culture, too, and I remember parties thrown by BJP leaders where they would openly entertain their political opponents. Among them, Arun Jaitley, who can justifiably claim to have made Amritsari naan a household name in Delhi, and Vijay Goel, whose propensity to feed his leader his favourite jalebis used to get him into trouble with his seniors more concerned about the then prime minister’s health, top my list of foodie politicos. In the shadow of their leader, they made food a celebration where politicians kept their differences at the door and savoured the little pleasures of life.

Vajpayee extended this philosophy even while negotiating the choppy waters of the sub-continent’s politics. Oberoi remembers a tricky moment at the famous banquet he had hosted in the then President Pervez Musharraf ’s honour at Taj Palace. After the first course of galouti kebab was served, Vajpayee summoned the chef and pointed out to him that his guest wasn’t eating. Oberoi understood the problem and quietly went up to the president and assured him that the mutton was halal.

Whether it was the poori-bhaji he loved to start his day with, or the roasted cashew he would polish off at cabinet meetings, or the jalebis and malpua of Kaleva that he just loved, Vajpayee loved good food of all kinds. Oberoi recalls how Vajpayee would check out the local specialties wherever he went.

He was as much in love with appam and stew, or the Kerala prawn curry, which he discovered on his travels to Kumarakom, or the Lahori fish and kadhai gosht, which he would relish in Pakistan. But at the end of the day, like a good post-Partition Delhiite (Vajpayee moved to the city as an RSS pracharak in the early 1950s and settled down first in Naya Bazar), he would find his soul food in Paranthe Wali Gali, Sagar and Chungwa (House of Ming was his other choice for Chinese, especially when he had Brajesh Mishra, his friend and principal secretary, for company). Politician, poet, epicure, bon vivant — Vajpayee will be remembered in many ways in many hearts.