Why Atal Bihari Vajpayee was a man of peace

When it came to building peace in the region, Vajpayee showed the kind of moral courage and political will that today’s leaders would do well to learn from.

For many Pakistanis, the late former Indian Prime Minister Atal Bihari Vajpayee stands out as the co-architect of the Lahore Declaration in February 1999 together with the-then Pakistani Prime Minister Nawaz Sharif. In this context, Vajpayee’s defining moment came during that visit when he became the first Indian statesman to initiate a visit to the Minar-e-Pakistan. 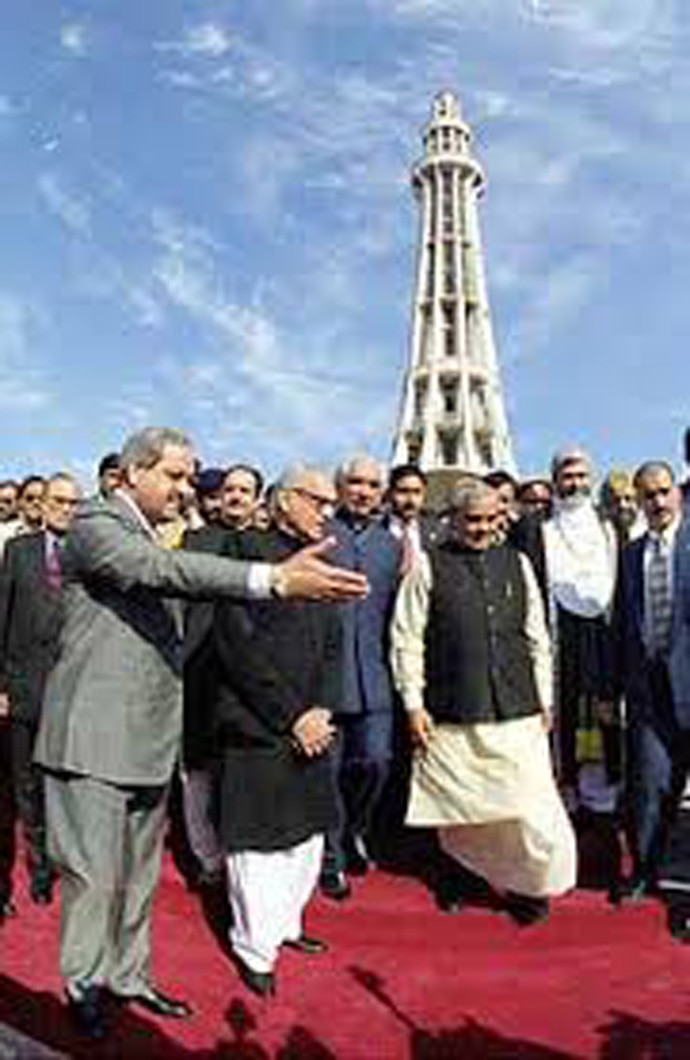 This marble, tile and stone minaret built in 1960 marks the place where the Lahore Resolution of 1940 was passed in what was then Minto Park (now Iqbal Park), calling for greater Muslim autonomy within British India. The park lies on the outskirts of Lahore’s Walled City, near the Badshahi Masjid and Lahore Fort.

Now commonly called the Pakistan Resolution, the declaration, in fact, makes no mention of Pakistan. But it did give the All India Muslim League greater impetus to push for an independent nation-state.

For Vajpayee to initiate a visit in homage to this spot speaks of his trademark humility that so many have paid tribute to. It stemmed from his sincerity in building peace, but was also a consummate political move, in keeping with his great statesmanship.

On the one hand, it rendered speechless the naysayers in Pakistan who balk at building peace with India because, they say, “India has never accepted the reality of Pakistan.” On the other hand, it silenced the right-wing Hindutva lobby in India that refused to accept the reality of Pakistan and aspired for a united India – Akhand Bharat – under the saffron banner.

Although Vajpayee’s constituency was this very Hindutva right-wing, he was a realist. He had not only the moral courage, but also the humility to able to rise above his own ideology for the sake of the larger cause: peace between India and Pakistan, peace in the region.

That Lahore visit, marked by idealism, excitement and hope, took place after India’s nuclear tests of May 1998, with Pakistan following suit. The tests were a game-changer. We have seen what nuclear weapons can do. Two abiding universal resolves that emerged from the horrors of Hiroshima and Nagasaki are: Never forget, and never again.

With the eyes of the world upon them, both Sharif and Vajpayee were acutely aware that now more than ever before, dialogue was the only option. 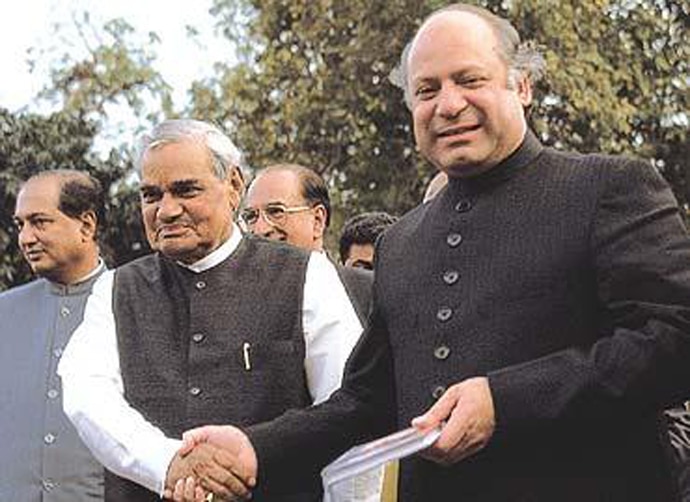 Journalist Kingshuk Nag in his political biography of Vajpayee, Atal Bihari Vajpayee: A Man for All Seasons, adds an interesting bit of information to this scenario. He writes that in the mid-1960s Vajpayee’s mentor in the Bharatiya Jana Sangh, Deen Dayal Upadhyaya, in conjunction with socialist leader Ram Manohar Lohia, “had come up with the concept of a confederation of India and Pakistan”. Repudiating the Akhand Bharat demand, this out-of-the-box thinking paved the way for good bilateral relations between India and Pakistan. The nuclear tests, writes Nag, made Vajpayee acutely aware of the need to push this agenda.

Vajpayee was well aware of the opposition both at home, in India, and in Pakistan. As he famously said during that momentous trip, Pakistan did not need his or India’s ‘mohr’ (stamp) to be accepted as reality — its creation was already a reality. His visit to Minar-e-Pakistan magnanimously demonstrated his acceptance of this truth.

This was a move that he himself initiated on his Lahore trip, inaugurating the Delhi-Lahore air-conditioned bus service, accompanied by several prominent Indians from the fields of media, film, art, culture and cricket, including Shatrughan Sinha, Mallika Sarabhai, Arun Shourie, Javed Akhtar, Satish Gujral, Kuldip Nayar and Kapil Dev besides the official delegation and some family members.

"This is a defining moment in South Asian history and we will have to rise to the challenge," Vajpayee told Nawaz Sharif at the time.

Pakistan’s right-wing, the other side of the coin to India’s, was not impressed by Vajpayee’s gesture of peace. Perhaps prodded by the ‘invisible forces’ or ‘falahi makhlooq’ that sabotage any moves towards peace between the two countries, the Jamat-e-Islami came out in full force to protest his visit. Their demonstrations on Lahore’s Mall Road halted traffic. The politically motivated nature of their protests is evident in their petty action, weeks later on March 23, to “purify” the Minar-e-Pakistan, scrubbing the spot with rose water where Vajpayee had stood because his visit had “defiled” it.

Their February 1999 protests meant that Vajpayee, staying at Governor House on Mall Road in the heart of Lahore, couldn’t leave for his dinner appointment on the other side of town at the Lahore Fort. The government ordered the police to disperse the protestors, which the police did with gusto, their batons and tear gas injuring many demonstrators. 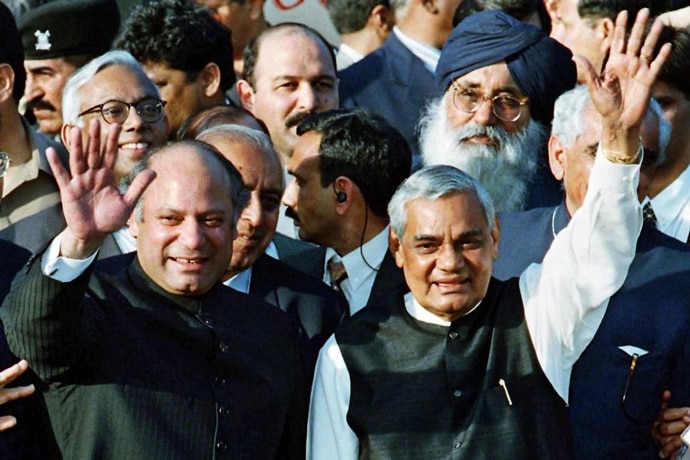 Officials of the Foreign Ministry wanted to tell Vajpayee that the delay was due to “technical issues” but Mushahid Hussain brushed aside their face-saving efforts and told the Indian prime minister that they were stuck because of street protests. Vajpayee waved aside his apology, saying, “It happens in India too”.

Later, reaching Lahore Fort, Vajpayee wanted to visit the Gurudwara by its side. The Jamat had been forcibly dispersed from Iqbal Park earlier, and whiffs of tear gas wafted through the air. As Vajpayee’s eyes began to water, an embarrassed Mushahid tried to offer him a tissue. But Vajpayee had already taken out his own handkerchief. Smiling, he reassured Mushahid, saying he was used to this too.

The ill-advised Kargil war initiated by then-Pakistan Army Chief General Pervez Musharraf later sabotaged the Lahore Declaration. But let it also be remembered that Vajpayee reciprocated the famous handshake by that very Musharraf in Kathmandu and later sat at the dialogue table with him in Agra.

That this process too could not move beyond the promise it held again has less to do with Vajpayee than with those on both sides who regularly sabotage any attempts at peace between the two countries.

In the final analysis, whatever his flaws and ideological political moorings, when it came to building peace in the region, Atal Bihari Vajpayee showed the kind of moral courage and political will that today’s leaders would do well to learn from.

Post your comment
#Pakistan, #Diplomacy, #Nawaz Sharif, #Atal Bihari Vajpayee
The views and opinions expressed in this article are those of the authors and do not necessarily reflect the official policy or position of DailyO.in or the India Today Group. The writers are solely responsible for any claims arising out of the contents of this article.

Beena Sarwar is a journalist from Pakistan. She blogs at Journeys to Democracy