Atishi: 'BJP is not coming back to power. There will be a coalition and AAP will support any govt that gives Delhi full statehood'

Atishi is an Aam Aadmi Party (AAP) leader standing for elections in Delhi. Atishi spoke with Rohit E David about why AAP and Congress broke up before starting, the cult of Arvind Kejriwal and the appeal of PM Modi.

Q. Congress corruption was AAP’s main plank to power — yet, AAP wanted an alliance with the Congress. Doesn't it show a desperation for power?

AAP’s rise definitely happened against Congress’ corruption — but today, if you see Narendra Modi and Amit Shah’s government which has been running for the last five years, in my view, corruption has not reduced. I think the Rafale deal is perhaps one of the biggest instances. In addition, communal tension and hatred developing between religions, castes, Hindu-Muslim conflict, lynching, violence on Dalits — it is all unprecedented. You have so many subversions of the democratic institutions, media, judiciary, Election Commission, etc.

That is the reason why it’s important for all democratic, anti-BJP forces to come together.

Q. Did talks between the Congress and AAP fail over the Haryana deal?

What AAP and a lot of opposition parties wanted was that there should be only one candidate that stands against the BJP — this is the reason why we were suggesting a pan-north India alliance between Delhi, Haryana, Punjab and Chandigarh. These are all the states where AAP has a certain stake in electoral presence. Congress and Rahul Gandhi had the opportunity to take on national leadership — but it seems they were not interested.

For the past eight months, we were trying for an alliance with Congress, and they repeatedly said that we won’t do it.

There was another phase when they were not talking to us but they were apparently planting stories in the newspaper everyday. We were very clear from the beginning that we don’t want an alliance just in Delhi, because in the capital, we are capable of beating the BJP on our own. When Modi’s wave was at its peak, AAP brought BJP down to three seats in Delhi.

What I can say is that we were in touch with many Congress leaders. There was a conversation which happened with Rahul Gandhi at Sharad Pawar’s place. But Congress seems to only want to defeat BJP in seven seats and not in 33 seats. Since the nominations have happened, there have been many media outlets who have done Twitter polls — there is a neck-and-neck fight between AAP and BJP.

Congress is relegated to a very distant third position.

The truth is, we don’t need an alliance with the Congress in Delhi. We can beat the BJP on our own in the capital. We wanted a pan-north India alliance.

If Congress, AAP, JJP joined, we could have brought down BJP to zero in all the 33 seats.

It’s not just these seats — an alliance across the north of India would have sent a message to the entire country. It’s very clear that BJP is not coming back to power. There is in all likelihood going to be a coalition government — AAP is going to support any government based on their promise for full statehood for Delhi. Taking to the streets, where the action is: AAP is led by Arvind Kejriwal in its fight against big national parties. (Source: Facebook)

Q. What are AAP's ideals today?

I think that AAP stands for the interests of ordinary people in the city. Those people who live in unauthorised colonies, resettlement colonies, not more than 25% of the city’s population lives in bungalows. These are people who have faced the consequences of lack of development — no water pipelines, sewer connections, schools, primary or secondary health care. AAP stands for governance for the ordinary people.

Q. Shazia Ilmi says AAP stands for sexism, it is misogynistic and targeted her with sexist abuse. What are your thoughts? 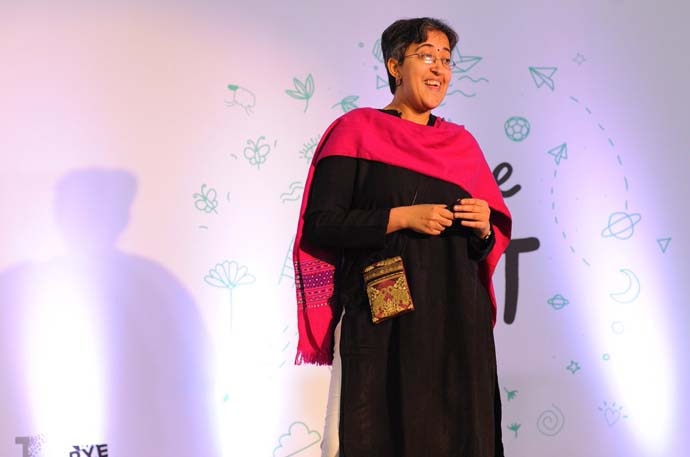 Aatishi/Aatishi Marlena? 'I think the focus should be on the work I have done and not on the names I carry' (Source: Facebook)

Q. Don’t you think AAP whittled away its appeal among those who once liked its idealism?

If you step out of this office into our campaign war rooms, you will see a lot of young people who have come to volunteer in this campaign — if this is not idealism, then what is?

There are two software professionals who have left their jobs in Silicon Valley and are coming in and volunteering for us. AAP represents the only hope there is for change in this country. We are able to do what we can with such low budgets and constraints because we are driven by this passion.

Q. What do you think drives the massive support PM Modi has from the public?

I think you might be mistaken on how much support he actually has. This election will be a very telling one for him. There has been an erosion of his support from a wide number of people. Traders who had traditionally been BJP voters are extremely disappointed with them, you have the youth who are struggling for jobs, farmers are in a state of crisis. India tends to vote very sensibly. If you remember, India Shining campaign was where everyone that the BJP was going to come back with a thumping majority. You saw what happened. People voted for their bread and butter issues — the last time, people voted for Modi because they wanted change.

Q. But opinion polls have suggested that the BJP will be voted to power — what’s your view?

Even if I assume they are honestly done, opinion polls tend to reflect upper caste, upper class sentiments.

I believe that there is a lot more to India than this.

Modi has lost his vote share which will come down to a minimum of 10%-12%. We can see that in all phases in Uttar Pradesh elections. After every phase, it is becoming clear that the BJP is substantially losing ground to the SP-BSP alliance. 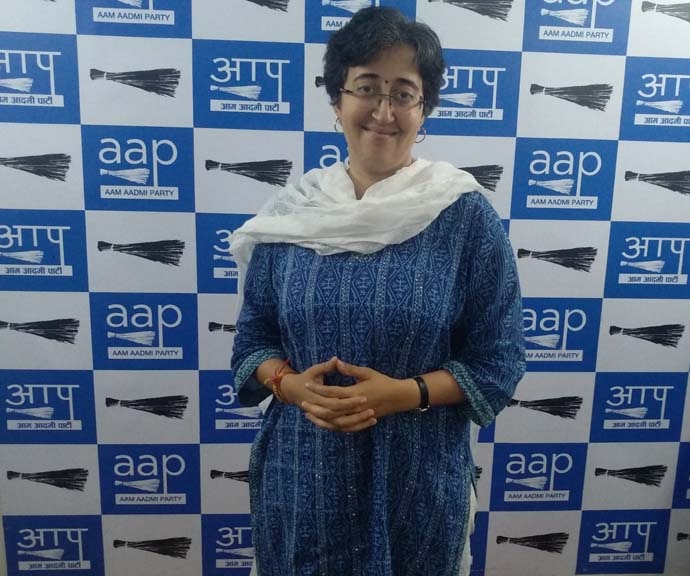 'AAP had to literally convince the voters that we exist in Delhi, we stand for change, our symbol is the jhadoo' (Source: Author)

Q. Is it true that AAP has no inner-party democracy and only the cult of Arvind Kejriwal can prevail?

In any organisation, there will always be a person who will be in a leadership role. No organisation can work without a team leader. That’s what leadership is about.

Let’s not confuse inner-party democracy with lack of leadership. Every organisation needs decisive leadership — and that, Arvind Kejriwal provides.

There is no doubt of the fact that all people in AAP have a strong voice in decision-making. There can never be complete democracy in any political organisation because finally, there are a lot of things which are strategic and tactical decisions. There is never complete democracy in a team of 10 people working in an organisation. I am working with a team of 10 people in my campaign — I take inputs and suggestions from everyone and finally, one person takes the call on what has to be done.

A democratic decision-making process is not always a correct political decision. That is the distinction we all need to make.

Q. Why has AAP fielded only one woman candidate?

In any political process, it is not easy for anyone from marginalised groups, be it, women, Dalits, minorities, to get a voice easily in politics. Forget politics, well-educated women from premier national and international universities still find it difficult to compete at par with men in their professional careers. It’s them who have to make difficult choices.

Politics is a far more difficult domain than a corporate career and so, it is definitely more difficult for women to get opportunities. I think that is what we are here to change. When we are talking about politics, we need to throw away 'should' from our dictionary, we have to accept the realities of society as they are — and we have to get on the ground, struggle and make change happen.

Q. After Oxforf, why did you decide to join politics?

Can people from Oxford not join politics — is it like a ban?

I could have got a good corporate job but every day, I would have wondered what type of education I would be able to give my children, whether they will good jobs, college admissions, whether if any family member falls sick, I will able to afford their health care, would I be able to step out of my home at 8pm and feel safe?

Finally, all these decisions are made by politicians and all us are armchair critics and we feel that this is not right and that’s not right — but someone has to roll up their sleeves and do something to change it. 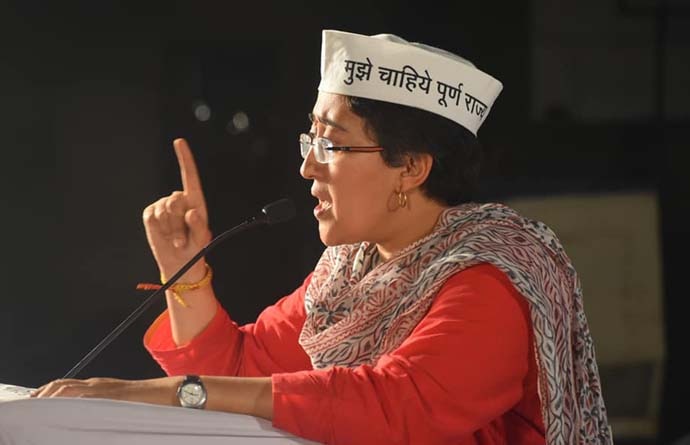 Armchairs are passe! Aatishi followed Oxford with a deep dive into politics in Delhi. (Source: Facebook)

Q. What are the key factors you are fighting elections on?

The most important point on which we are fighting elections is full statehood for Delhi — in the past four years, everyone has seen the type of work AAP has done. We have also seen that the governance structure of Delhi has been misused to prevent Arvind Kejriwal’s government from being able to perform.

I think now is the time that two crore population gets access to proper governance. We need proper cities.

The Prime Minister of the country needs to be thinking of Pakistan and China — not Kalyan Puri, Trilok Puri and chain snatching.

Q. You were instrumental in changing the education system in Delhi — were you disappointed when you were sacked as an advisor to the Delhi government?

More than disappointed, it's telling of the mentality of the BJP in the central government behind my removal. They had no real grounds. I was well qualified for the job, I was not any sort of burden to the exchequer. I think the message was clear — they didn’t want AAP to work for the ordinary people in the city, the 16 lakh students who study in government schools.

Q. Is this election AAP's biggest test after the assembly polls?

For AAP, every election is a test. We are not like mainstream political parties. We don’t have money, we are a volunteer-based party, people often leave their jobs and work, it is driven out of passion rather than cold calculations. When in 2013 we were contesting, no one knew who AAP was, just convincing people that AAP is there, our symbol is the ‘jhadoo’, took us months.

We showed again in 2013 and 2015 the ground-based strategy of reaching out to people is what actually works.

If you look at Delhi’s voting pattern, then citizens vote for parties — not for individuals. And people are standing with AAP.

Q. How has AAP changed the way Delhi lives over the last four years?

For the first time, anyone thought of this section of the population — and I think that’s where life has really changed.

Q. There has been a lot of controversy on your name — 'Atishi' or 'Atishi Marlena'?

I have nothing to say about that! There needs to be far more talk about the work I have done — rather than the names I carry.

Also read: How low can they go? Elections 2019 is seeing our politicians only fall lower and lower in mudslinging and maligning

Post your comment
#Lok Sabha, #Elections, #AAP, #Atishi marlena
The views and opinions expressed in this article are those of the authors and do not necessarily reflect the official policy or position of DailyO.in or the India Today Group. The writers are solely responsible for any claims arising out of the contents of this article.