Why Aatmanirbhar Bharat is not about Swadeshi vs Videshi

Aatmanirbhar Bharat is not about being defensive and building protective walls, but embracing the world with pride and confidence.

The beauty of a slogan is that it can be interpreted the way people hear it. When Narendra Modi talked of “Achhe Din” in his 2014 campaign, some dreamt of Rs 15 lakh in their bank account, while others thought of saying goodbye to income-tax. Similarly, the Prime Minister had barely uttered the words “Aatmanirbhar Bharat”, before the public began to give it their own spin. Social media has made nanosecond reactions, the order of the day. Now, people can change their avatars from epidemiologists to economists in just 280 characters. So, some lamented the demise of WTO and others celebrated Modi’s return to the Gandhian path of Swadeshi over Videshi.

Self-reliance definitely implies reducing dependence on others, but it does not necessarily mean shutting the window to the rest of the world. This is neither possible nor desirable in hyper-connected economies. By placing the palms over the eyes, one can stop seeing the world outside but it does not cease to exist. In his speech, the Prime Minister referred to two specific examples in the context of self-reliance. First, he mentioned how India scaled-up production of face masks and PPEs (Personal Protection Equipment) within a matter of weeks after Covid-19 outbreak in the country. Second, he talked about the self-sustaining character of Indian villages. Had it not been for the latter, millions of people in rural India would not have survived the prolonged lockdown. 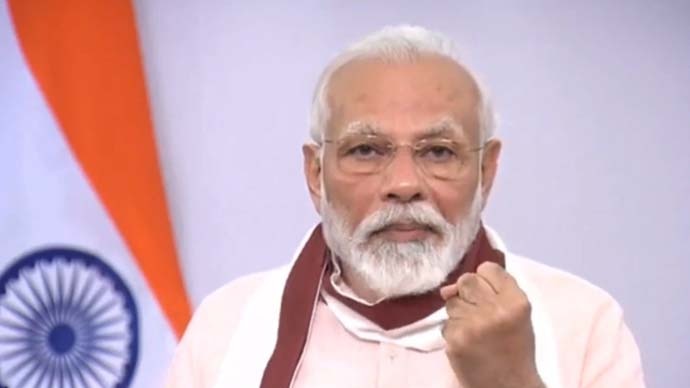 Prime Minister had barely uttered the words “Aatmanirbhar Bharat”, before the public began to give it their own spin. (Photo: Twitter/ @narendramodi)

Next, the PM Narendra Modi, with his penchant for pithy phrases, coined another tagline: Be vocal about local. In that context, he cited the example of khadi — how a little nudge had made khadi sexy again. By doing so, he underscored the opportunity of marketing India’s ethnic products across the globe. But, it was in no way comparable to Gandhiji’s call for replacing textile manufactured in Manchester with the humble home-spun fabric of India. If anything, it was a message for reversing the trend by exporting Indian handloom products overseas.

The industry cannot thrive by depending on local demand alone. It took India 50 years to learn this lesson, at a huge cost to the nation. We cannot afford to set the clock back by reverting to protectionism. To be globally competitive, India will need technology and investment. China took years to get both. Having developed its technological prowess and economic might, it can now take the powerhouses of the West head-on. The Chinese did it, if one may say so, by “stealing with pride” as the United States and others moved industries lock, stock and barrel to their country for the lure of cheap labour and low-cost manufacturing. Japan did it before them by beating the West in its own game of automobiles and precision engineering.

There is a joke, apocryphal of course, of Winston Churchill advising US President Harry Truman when the Americans were planning to drop the atom bomb on Hiroshima, to “make sure it explodes”. Otherwise, he warned, the Japanese will dismantle the bomb, copy the technology and make one that will actually work to be used against the US. The US learnt that lesson not then, but much later, in a different way. By outsourcing manufacturing to China and other countries, it stopped creating jobs locally. Donald Trump stormed into the White House on the promise of “Making America Great Again” by bringing industry back again.

Recall comedian Jay Leno taking a jab at President George W Bush soon after 9/11? Bush wanted all Americans to sport a miniature US Flag on their outfits as a mark of national solidarity. Leno joked that America had to import a few million lapel badges of the Stars and Stripes on an SOS shipment from Taiwan. One saw a sort of encore of that with masks and PPEs after the pandemic struck. A little nudge had made khadi sexy again. PM's message was about reversing the trend by exporting Indian handloom products overseas. (Photo: Reuters)

PM Modi reiterated his vision for making this the Indian century. To realise that ambition, India has to leapfrog to a brave new world. To get there, it cannot wait indefinitely to indigenously develop cutting edge technology and domestic capital formation to invest in mega projects and world-class manufacturing. India cannot ride into the future in bullock carts. “What you do not have, you acquire” is the mantra of the wise. It would be foolish to waste time in reinventing the wheel. Foreign investment and international companies are welcome as long as they generate economic activity, create employment and build state-of-the-art industrial capacity.

The debate of Swadeshi vs Videshi is by itself problematic. We make modern cars in India but even Indian brands use imported engines. So, does that make an Indian brand car Swadeshi or Videshi? We certainly do not wish to go back to the age of ancient jalopies from luxury sedans and SUVs. The same way, capital-intensive industries have a large component of imported machinery that are not made in India at this point. Some of these companies may also have a foreign shareholding. But, as long as they are contributing to the country’s economic development, where is the issue? Besides, the construction and engineering of these plants are done by Indian companies that are second to none in the world.

What is critical, therefore, is local value addition. We cannot allow India to be converted into a giant sweatshop. So, when state governments like Uttar Pradesh, Madhya Pradesh and Gujarat are creating landbanks to attract global companies moving out of China, it is hopefully not for assembling products with components imported from other countries. That was certainly not the idea of Narendra Modi’s “Make in India”.

Aatmanirbhar Bharat is about India finding its place in the sun. It is to mobilise all its resources (natural, physical, human, intellectual and technological), and leverage diversity (demographic, ethnic and geographic) and stand tall in the world without fear or favour. It is not about being defensive and building protective walls, but embracing the world with pride and confidence.

Also read: Modi gives a mantra before the stimuli

#Swadeshi vs videshi, #Economic stimulus, #Narendra Modi, #Aatmanirbharbharat
The views and opinions expressed in this article are those of the authors and do not necessarily reflect the official policy or position of DailyO.in or the India Today Group. The writers are solely responsible for any claims arising out of the contents of this article.