Why blame only Suu Kyi for being racist? Gandhi, Vivekananda were no different

Some of the biggest icons of the world's largest democracy haven't been free from Islamophobia either.

She is a Nobel Peace Prize winner. She also happens to be an icon for Burmese democracy. But 70-year-old Aung San Suu Kyi may well have compromised on her reputation. In October 2013, "The Lady" gave an interview to BBC's Mishal Husain. During the course of the interview, Husain tried to corner Suu Kyi on the issue of Rohingya Muslims.

Despite Husain's repeated efforts, Suu Kyi decided to play down the ethnic cleansing of Burma's Rohingya Muslims. As per a new book, Husain's interviewing style did not go down well with Suu Kyi. "No one told me I was going to be interviewed by a Muslim," said Suu Kyi in an off the record comment. Admirers of Suu Kyi have remained stunned ever since her anti-Muslim remark has been reported in the media.

More than a hundred thousand Rohingya Muslims have fled Myanmar out of fear. Many were pinning their hopes on Suu Kyi's National League for Democracy (NLD) to turn things around. But with Suu Kyi reportedly suffering from an anti-Muslim bias herself, can the situation really change?

A leader who herself delivers racist statements cannot be expected to lead a country which has been silently taking the lives of its minorities. So far the accusation against Suu Kyi was that she wasn't wholeheartedly condemning the persecution of Rohingya Muslims. But if recent claims are to be believed, Suu Kyi herself is in need of serious schooling which would rid her of racism.

Islamophobia is a global phenomenon. And Suu Kyi has become yet another manifestation of the same. Bashing Islam and Muslims is an easy way out for politicians. It brings them votes without providing real solutions to problems pertaining to economy and security.

At the moment there is no better example to illustrate the electoral significance of Islamophobia than Donald Trump. The Republican frontrunner for presidential candidature has proclaimed that "Islam hates us." Much before this, his campaign had come out with an official press release which said, "Donald J Trump is calling for a total and complete shutdown of Muslims entering the United States until our country's representatives can figure out what is going on." Donald Trump called for complete shutdown of Muslims entering US.

Believers in democracy and pluralism would have never expected such an individual to even be in the race for becoming president. But if Trump continues with the momentum which his campaign has generated, he may well go on to exploit anti-Muslim feelings among Americans to become the 45th president of the United States.

Donald Trump is not very different from former British prime minister Tony Blair. Following the murder of Lee Rigby, Blair had said that "there is a problem within Islam." He was once again in the news recently for having stated that "many millions" of Muslims have a viewpoint "that is fundamentally incompatible with the modern world."

The core argument is that after every Islamist terror attack, ordinary Muslims and clerics not only condemn the attacks but also distance Islam and Muslims from the actions of terrorists. On the other hand, there are a few who celebrate such barbaric incidents. However, such people constitute a minority. That's the reason why ISIS, Taliban and Al Qaeda have only thousands of Muslims among their ranks. Why are a majority of 1.6 billion Muslims in the world standing against and not for ISIS, Taliban and Al Qaeda?

Yet Trump and Blair hold either all or millions of Muslims responsible for the actions of a few thousand Muslims who are killing innumerable peace loving Muslims on a daily basis in places like Iraq, Syria, Afghanistan and Pakistan. It is shameful that politicians have chosen to alienate and attack Muslims for the sake of cheap publicity and votes.

Situation not different at home

The situation is not very different back home in India. Forget about the contemporary era which has thrown up several leaders who've made their career out of anti-Muslim propaganda. Some of the biggest icons of the world's largest democracy haven't been free from Islamophobia either.

"The Mussulman being generally in a minority has as a class developed into a bully. Moreover, being heir to fresh traditions he exhibits the virility of a comparatively new system of life. Though in my opinion non-violence has a predominant place in the Quran, the 1,300 years of imperialistic expansion has made the Mussulmans fighters as a body. They are therefore aggressive. Bullying is the natural excrescence of an aggressive spirit."

The above observations belong to none other than Mahatma Gandhi. In an article titled "What may Hindus do?" (Young India, 19 June, 1924), Gandhi termed the entire community of Muslims as a "bully". His article was based on sweeping generalisations as he compared Muslims with fighters and described them as "aggressive". Contrast this with what Gandhi had to say about Hindus in the same piece. "The Hindu has an ages-old civilisation. He is essentially non-violent. His civilisation has passed through the experiences that the two recent ones (Muslims and Sikhs) are still passing through. If Hinduism was ever imperialistic in the modern sense of the term, it has outlived its imperialism and has either deliberately or as a matter of course given it up." 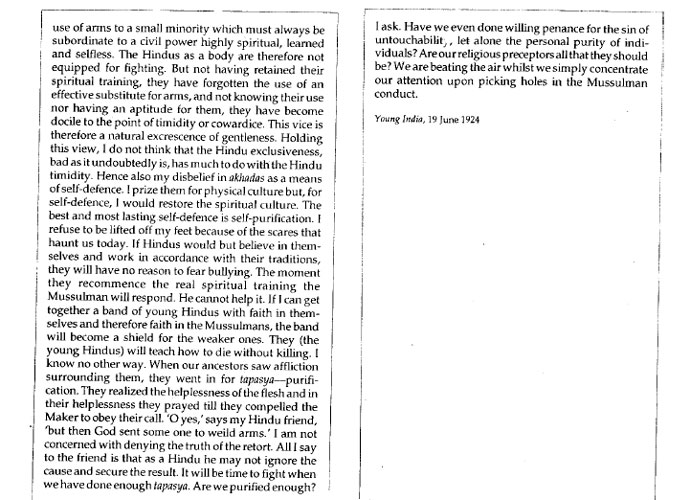 Gandhi added that "pre-dominance of the non-violent spirit has restricted the use of arms to a small minority which must always be subordinate to a civil power highly spiritual, learned and selfless. The Hindus as a body are therefore not equipped for fighting. But not having retained their spiritual training, they have forgotten the use of an effective substitute for arms, and not knowing their use nor having an aptitude for them, they have become docile to the point of timidity or cowardice. This vice is therefore a natural excrescence of gentleness."

As per Gandhi, Muslims were imperialistic and Hindus non-imperialistic. Muslims were equipped for fighting and aggressive, whereas Hindus non-violent and gentle. If the father of the nation can portray a particular community as being so very dangerous then who can be possibly free from bias?

If you think that spiritual gurus can be an example of toleration, think again. Who hasn't heard about the saffron saint Vivekananda? He is remembered as someone who preached tolerance like Gandhi. But Swami Vivekananda, like Gandhi, had something to say about Muslims. His views on Muslims have been extensively quoted by Arun Shourie.

"You know that the Hindu religion never persecutes. It is the land where all sects may live in peace and amity. The Mohammedans brought murder and slaughter in their train, but until their arrival, peace prevailed," said Swami Vivekananda. It's amusing to know that Vivekananda had such a convenient historical perspective. In his opinion, violence was exclusive to Muslims and non-existent in India before their arrival.

Vivekananda was unsparing when it came to criticising Islam, Muhammad or the Quran. "Think of what the good (sic) Mohammad did to the world and think of the great evil that has been done through his fanaticism." Swamiji felt Muhammad was a fanatic who brought more evil than good to the world.

He even subscribed to a radical interpretation of the Quran which will only be agreed upon by ISIS and Al Qaeda. "The Mohammedan religion allows Mohammedans to kill all who are not of their religion. It is clearly stated in the Koran. Kill the infidels if they do not become Mohammedans. They must be put to fire and sword. Now if we tell a Mohammedan that this is wrong, he will naturally ask, 'How do you know that? How do you know that it is not good? My book says it.'"

It's a pity that Vivekananda sought to propagate such views about Islam without reflecting on Quranic injunctions concerning religious freedom. "There is no compulsion in religion" (2:256) and "I have my religion and you have your religion" (109:6) are Quranic proclamations upholding religious freedom and pluralism.

Islamophobia or mistrust of Muslims is not new. It's been around for centuries. It won't go easily but people in public life need to be careful. They shouldn't aspire to build their careers out of anti-Muslim bigotry. The world is changing with the advent of information technology. Political leaders need to change too.

Not simply in terms of their approach towards technology by becoming computer savvy but by also shrugging off their biases and prejudices. The next time a Muslim interviewer hard presses Suu Kyi on Rohingya Muslims, she should address the issue bluntly instead of stating that "no one told me I was going to be interviewed by a Muslim."

Post your comment
#ISIS, #Mahatma Gandhi, #Aung San Suu Kyi, #Islamophobia
The views and opinions expressed in this article are those of the authors and do not necessarily reflect the official policy or position of DailyO.in or the India Today Group. The writers are solely responsible for any claims arising out of the contents of this article.