As Mark McGowan shares a Covid message with a translator for Aboriginal communities having low vaccination rates, the video gets brutally trolled.

Mark McGowan, the State Premier of Western Australia, has a big role to play in preventing the Covid spread in Australia. His job involves taking measures to prevent misinformation around vaccination, especially in areas where vaccine rates are low.

One such measure is getting brutally trolled because it has come off as a supremely racist initiative.

Because it seems that the minister looks at the Aborginals as some "uneducated folk who cannot understand plain Australian English". 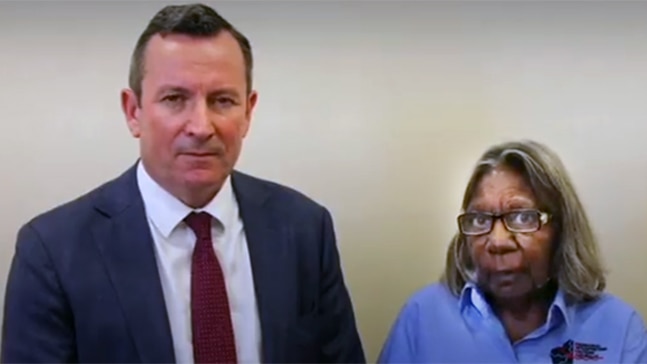 A video of Mark McGowan is going viral where Mark talks about his Covid message and how Coronavirus is a deadly virus and can kill and harm people. His 2-minute-long video also has line-by-line translations by an indigenous elder translator, who is literally interpreting each line in 'Aboriginal English', or the language used by the specific tribe that it is addressed to.

This fourth video out of a series of videos, is particularly being seen as offensive and insulting because it shows Aboriginal people as equivalent to being children who need spoon-feeding of the 'Australian English' language. Here's the video:

This is the most racist government initiative I’ve ever seen.@MarkMcGowanMP had an indigenous elder translate his message from English to “Aboriginal-English.”The bloke is sick. pic.twitter.com/VuP7cwPlPe

TWITTER IS FURIOUS, OF COURSE, AS YOU CAN SEE FROM THE REACTIONS

1. WHEN VIEWED BY ITSELF, IT COMES OFF AS INSULTING

It’s condescending to aboriginal people, as it insinuates they don’t understand the language of the land. Surely you can see this, yes?

3. BUT THERE WERE PEOPLE WHO SUPPORTED THIS TOO

Vaccination rates in WA Aboriginal communities are still too low. This video was 1 of 4 Mark McGowan did with Aboriginal Elders in different languages. What is wrong with providing culturally-competent public health info that is tailored to vulnerable communities? pic.twitter.com/iqilOLZ6G4

4. AS ALL ABORIGINAL LANGUAGES NEED NOT RESEMBLE ENGLISH

JFC, mate. Aboriginal English is a thing. Look it up. There have been calls for governments to communicate with indigenous communities using language they use colloquially for years. pic.twitter.com/dxtRf8Ywrk

BUT WAIT, WHY IS HE DOING THIS?

Western Australia followed a Zero-Covid policy and kept its borders closed until the vaccination status was 90% for people over the age of 12. But the vaccination rate for indigenious communities in September 21 was less than 7%, which was the lowest vaccine rates in the country.

Many indigeneous communities hesitated getting vaccinated on account of their religious beliefs and because of rampant fear and mistrust.

McGowan had heard from one Aboriginal person that white supremists were sending information to Aboriginal folks, over mails, that they shoudn't get vaccinated.

As indigenious communities held strong anti-vaccine beliefs and preferred to die than get vaccinated, this was troublesome for the people in the states, as borders would not open if the vaccine rate was not high enough. Seems like some communities are being forced to take the vaccines.

Ultimately, it will be headfirst into a paddy wagon anyways.☹️ pic.twitter.com/4eczZN64Ew

SO, WHAT IS THE GOVERNMENT DOING?

To prevent this stagnant low vaccine rate in the indigenous communities, the government funded a ''Vax the Outback" campaign to promote vaccination in remote areas.

Vax The Outback is about protecting our remote communities, where people are more vulnerable to COVID. Thanks to @ErnieDingo1 & the @bushtvmob crew for helping get the message out. #VaxTheOutback #KeepOurMobStrong pic.twitter.com/b4Y9UHx8vT

As Australia has about 500 aboriginal communities, The Aboriginal Health Council of Western Australia also launched a campaign to connect over Covid with the communities in their own language, and has posted videos on their Facebook page. Here are the four videos that have been published as on date:

1. Video published on December 21, 2021 was translated into Ngaanyatjarra, for the aboriginal people in the Ngaanyatjarra Lands safe.

3. Video published on December 24, 2021 was translated to Walmajarri, for the aboriginal folk.

WHY IS THE FOURTH VIDEO RECEIVING SUCH STRONG REACTIONS?

The first three videos show how aboriginal languages are completely different from English, and have a few common English words. But when a person sees the fourth video (which is the only video going viral) in isolation for the first time, it obviously gives the impression that line-by-line translation is really not necessary. It looks as if English is being translated to accented English, and it seems that Mark and his team is taking a very demeaning stand to assume that this particular tribe is uneducated or cannot understand English.

Assuming aboriginal folks to be uneducated when their language highly resembles Australian English can be a genuine problem.

Maybe he shouldn't have got the translation in this language, but that wouldn't have solved his problem anyway. But when we look at the intent and efforts behind the same, maybe there is a different story which should be acknowledged? Maybe he chose to do this as a precautionary measure only?