Come election season, the Ayodhya temple will return to the Bhartiya Janata Party's (BJP) agenda with a bang.

Precisely that appears to be the reason behind the sudden echoing demand from different saffron quarters for the construction of the much-debated Ram temple at the disputed Ramjanmabhoomi-Babri Masjid site in Ayodhya. Even as the main BJP leadership discreetly remains silent on the issue, the demand is raised in a clearly orchestrated manner by different frontal organisations and close allies of the party.

The first bugle was sounded last week by none other than Rashtriya Swayamsewak Sangh (RSS) chief Mohan Bhagwat, who openly sought enactment of a legislation to start construction of the temple. While some far-right elements in the party, like Union minister Giriraj Singh, keep taking Ayodhya on a high pitch every now and then, this time, the lead was taken by others.

Once a vociferous “international” president of Vishwa Hindu Parishad (VHP) and now self-appointed chief of Antar-Rashtriya Hindu Parishad, Pravin Tagadia went to the extent of staging high drama on the streets of the ancient temple town of Ayodhya. 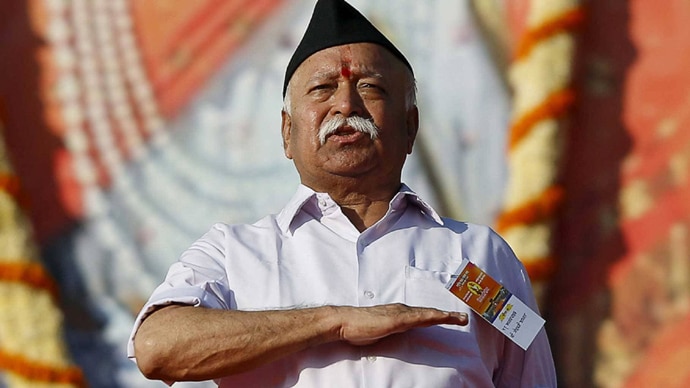 There has been sudden echoing from different saffron quarters for the construction of the much-debated Ram temple. (Photo: PTI)

Even though he failed to pull any crowd, the sensation he created by his call for a march to the disputed Ayodhya site where a makeshift Ram temple stands was enough to put him back on the centrestage of temple politics.

Since Togadia has been at loggerheads with Prime Minister Narendra Modi for quite some time, it was natural for him to run down the Union government for dilly-dallying with the temple issue. His attempt to capitalise on Ayodhya pressed warning bells in the BJP. (Photo: PTI)

Perhaps that is what prompted BJP president Amit Shah to airdash to Lucknow, barely 48 hours later.

While Shah maintained that he was there only to address a BJP-RSS coordination committee meeting and the rumour mills were busy churning out stories about him taking the final call on a probable expansion of the Yogi Adityanath cabinet, informed sources claimed the focus of the meeting remained primarily on the Ram temple. Worry was also expressed over Togadia’s attempt to steal the Ayodhya thunder.

Knowing the ground reality, that no legislation on the temple would be possible as the BJP still does not have a majority in the Rajya Sabha, Shah and the UP RSS bigwigs sought to thrash out ways and means to keep the issue alive and burning until the next Lok Sabha election. And that is precisely what the entire saffron brigade seems to be already doing. Ahead of the 2019 Lok Sabha polls, the Ram temple issue appears to be taking centerstage again. (Photo: PTI)

Party MP Subramaniam Swamy has always been extremely vocal on the issue, but more recently Amit Shah appears to be taking Ayodhya to a higher pitch while many other senior BJP leaders have begun to repeatedly echo their strong sentiment for the temple. That includes even those holding constitutional positions like UP chief minister Yogi Adityanath, who is expected to refrain from meddling with issues that were sub-judice before the highest court of the land.

What is strange is that such an obviously pre-meditated campaign is being undertaken at a juncture when the Supreme Court is going to be taking up the long-pending legal battle presumably on a day-to-day basis. That surely arouses suspicion about some possible design to take the tempo to such a high pitch as to attempt to even influence the final verdict.

In any case, one never hears a BJP spokesperson talking in terms of losing the court battle. Each one of them makes it a point to loudly proclaim that they would abide by the court verdict — but what they also choose to add confidently is that the verdict would come in favour of Hindus anyway.

Evidently, it is their wishful thinking that they wish to impose on all and sundry.

That is where the difference lies between the two warring sides. No BJP leader is ready to say what the party would do if the Supreme Court verdict goes against the Hindu claim. On the other hand, Muslims do not hesitate to reiterate that they would abide by the court verdict – whether it is in their favour or against them. The Temple Tempo: Will the hype created over the Ram Mandir issue fetch BJP the desired dividends? (Photo: PTI)

Contrary to popular belief that the BJP leadership was playing the Ayodhya temple card to influence the 2019 general election, it appears that the idea behind the move is to reap a harvest in the crucial poll-bound states too. Of the five states that are going to polls over the next two months, the temple card could impact the minds of voters, particularly in Chattisgarh, Madhya Pradesh and Rajasthan. However, there was no way that the apex court’s decision could come that soon.

Perhaps that is why the BJP leadership and their allies are out to build a tempo over the temple, essentially to put up a façade that the long wait for a grand Ayodhya temple was over and the ruling BJP would soon pave way for its construction. The BJP has surely succeeded to the extent that a loud narrative has been built around the temple, so much so that no opposition party, including the Congress, is ready to even utter a word against the temple.

However, it remains to be seen if the hype created by the BJP will eventually get the party its desired dividends.