Ayodhya case deferred: Why this is good news for the BJP ahead of Lok Sabha 2019

The Supreme Court has adjourned the hearing of the much-awaited Ram Janmabhoomi-Babri Masjid dispute, which was scheduled to resume from today, to January 2019.

One cannot double-guess why the Lordships decided to do so. But, it may be recalled that some senior counsels appearing for the appellants — Kapil Sibal, Rajeev Dhawan and Dushyant Dave — had pleaded that it being a sensitive matter should be heard only after the 2019 Lok Sabha elections.

The political fallout of this deferment in an election season is difficult to predict. Some BJP, RSS and VHP leaders have already been raising a demand for the government to pass an Ordinance or Act for the construction of Ram Mandir to begin. Wait too long: Delaying a settlement on the Ayodhya dispute may not be in anyone’s interest. (Credit: India Today)

However, doing so would be walking into hazardous terrain. On the other hand, if it does not bite the bullet, the government may find it difficult to reign in its supporters. This definitely puts Narendra Modi and Amit Shah in a spot.

With a complete breakdown of communication between the government and the Opposition and a highly vitiated political climate, an interim truce seems unlikely. This does not augur well in the run-up to the polls both in the states and the Lok Sabha that will follow. Delaying a settlement may not be in anyone’s interest.

Everyone understands life has move on from 1992. Fifty per cent of India’s current population are below the age of 27. So, they were born after December 6, 1992, the day Kar Sevaks breached the cordon around the Babri Masjid. Many of them would be first- or second-time voters in the coming Lok Sabha elections.

The teenager who vaulted up on the dome would be in his forties now. Many who were actually involved in the Ram Mandir movement in the mid-1980s are pushing their sixties.

Yet, Ayodhya remains a live subject even after 26 years. That goes to show that Ayodhya and the Ram Mandir are only symbols. There is a deeper issue of Hindu identity at its heart.

The cult of Ram bhakts is a “Hindi heartland” phenomenon. The events of 1992 turned Ram Mandir at Ayodhya into a national rallying point. Missing the target: The delay in the verdict does not augur well in the run-up to the polls both in the states and the Lok Sabha. (Credit: Indiatoday.in)

Growing up as a Bengali, as I did, in eastern India, Ram was a mythological character for me. He was divine but not God. Few Bengalis, I dare submit, read the Ramayana. Those among them who had heard of “Ramcharitmanas” it was a “Hindustani” thing. Hanuman did not feature in the pantheon of deities Bengalis worshipped till the 1980s and 1990s. With changing demographics reciting Hanuman Chalisa came into vogue.

The situation was similar in a majority of eastern and northeastern states. It was not much different in the south of the Vindhyas. LK Advani captured the imagination of entire India with his historic “Rath Yatra”.

Lord Ram was a seen as a benign figure with pan-India acceptability. The rest of India may not have been as emotional about him as the people of the Hindi speaking belt, but loved by all. He also fitted the cultural idea of India almost to the point of being a secular idol. So, it was a political masterstroke.

The Ram Mandir agitation was a watershed in Indian politics. The Babri Masjid demolition a major disruption. Advani got the brunt of the criticism for the latter. But, Advani's contribution to what followed in the later years has been minimal.

There can be a counter-factual view. If not Ram Mandir, the BJP would have had to invent another agenda to mobilise its core constituency.

Still there are apprehensions about the BJP leveraging the Ram Mandir to polarise communities. The so-called “Hindu backlash” of the 1980s, is being termed as “majoritarianism” today.

It is true that both the BJP and the RSS have kept the issue on burning coal. But, to be fair, BJP has never used it as an election plank. Its biggest victory of 2014 was on the promise of change and development. 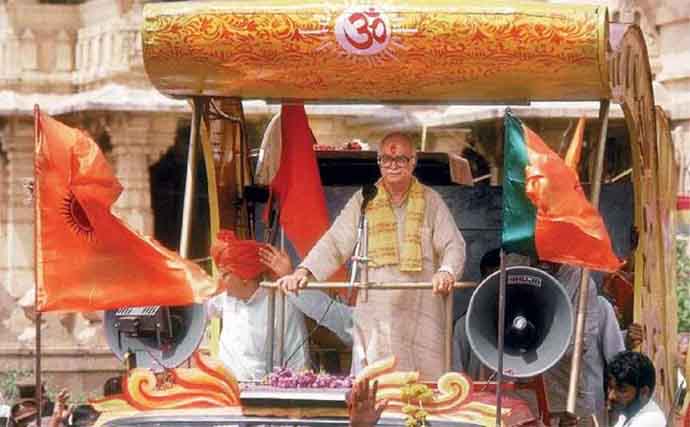 The Congress believes the "Mandir card” is all that BJP has in its arsenal. They are paranoid that if the chips are down, the BJP will play it sooner than later. Hence, its reactions are defensive.

To preempt the BJP, the Congress coopted other minority outfits like the AIMPLB as proxy. They even provide legal help to them.

Some may argue that this protracting tactics suits the BJP as well. It saves them from taking the extreme step. Despite fulminations, the BJP itself would be loathe to ride a tiger. This is evident in the repeated assertion of senior leaders that Ram Mandir will not be an election issue.

The BJP, as a national force, is here to stay. The combined opposition may succeed in getting the better of Narendra Modi. But, they cannot wish the BJP away. There is an assertion of Hindu identity, which if denied will invite further pushback.

The Congress is beginning to understand it can no longer take the core Hindu voters for granted. That is clear from its tentative steps towards soft Hindutva .

The BJP will keep its powder warm as a matter of strategy. But, neither Narendra Modi nor those next in line, Amit Shah, Yogi Adityanath, Nitin Gadkari are here for the short haul.

They will not take any rash decision and press the Mandir button under duress from their supporters knowing the consequences may be far-reaching and can easily go out of hand.

BJP leaders will have to display the highest order of statesmanship to convince the supporters that Ram Mandir is a symbol of faith. It has already existed in their hearts and consciousness for ages. The construction will only give it a physical shape. They would rather do it after coming back to power with full majority once again.

With that, they may be able to turn it into an electoral advantage for the BJP.

Also read: Why the Ram temple issue has been raised ahead of 2019 general elections