A myth, propagated craftily and regularly, is often mistaken to be a fact. Such is the case with Ayodhya’s Babri Masjid dispute, where the myth of the Muslim invader, destroying temples unscrupulously and incorporating them in new mosques as spoils of war, forms the core of the conflict.

Our colonial masters translated the practice of reusing older material in newer construction (architectural reuse) through the narrow binaries of “Hindu” and “Muslim”, a narrative that is even now etched firmly in the public memory of the subcontinent.

Brushing colonial conditioning aside, one finds that the history of reuse in the Indian subcontinent is a long and complex one, stretching as far back as the reuse of prehistoric rock shelters in sites such as Vijayanagara. But one need not go that far to show that architectural reuse was a well-established Indic practice much before Islam’s political forays into the subcontinent.

At the turn of the 12th century, followers of a revolutionary religious movement, Virashaivism (literally, heroic Shaivism), employed architectural reuse among other things to signal their triumph over Jainism, a rival religion. 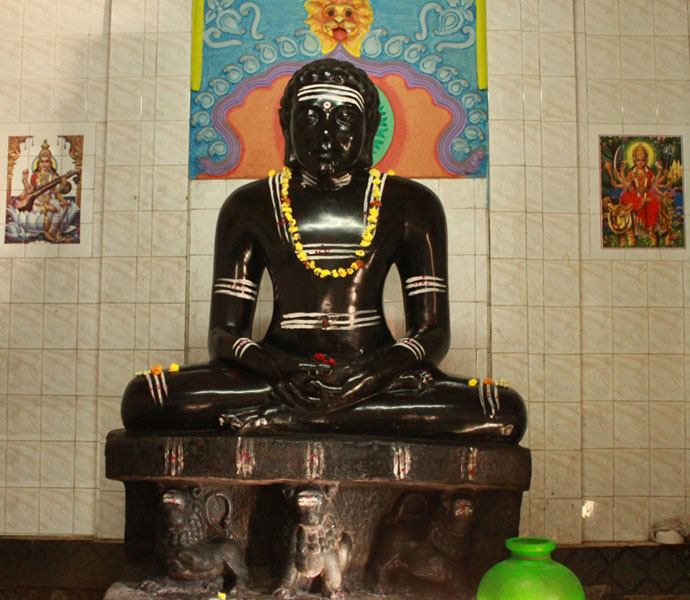 The black stone statue of a Jina, placed alongside a Shiva linga at Doddappa Temple in Karnataka's Adargunchi. (Credit: karnatakatravel.blogspot.in).

The founder of Virashaivism, Basava (initially a Shaiva Brahmin), was the chief minister of the Kalachuri king Bijjala, a staunch Jain with his capital at Kalyana in modern day Karnataka. The Basava Purana, a long hagiography dedicated to Basava narrates that not only did he successfully plot a regicide, but also sanctified violence against Jains, in rather gruesome ways such as putting “a sharp spear on the skulls of Jains". Such an ideology fell in line with Virashaivism’s idea of opposing the caste system and ostentatious rituals, tenets that made the new religion popular with the masses in no time. Being the religion dominating Karnataka in the early medieval era, Jainism took the greatest hit and saw a sharp fall in its following.

Apart from vying for political patronage, the Lingayats (followers of Virashaivism) also started appropriating and converting Jaina basadis (shrines) into Virashaiva temples, an act that not only signified Virashaiva strength, but was also a practical necessity for a nascent religion with not enough resources to build a new temple from scratch.

Accordingly, as Julia Hegewald argues in her paper on temple conversions in Karnataka, the Lingayats appropriated and reused the Doddappa Temple at Adargunchi, Karnataka. Built sometime between 10th and 11th centuries, the temple today is fronted by a stone sculpture of the bull Nandi (Shiva’s vehicle) and houses a massive black stone statue of a Jina, placed alongside a Shiva linga (phallus, the form in which Lingayats worship Shiva).

Save the image of the Jina, the entire temple was extensively rebuilt during the Virashaiva takeover of the basadi. Instead of destroying/mutilating the Jina statue, it was retained and painted with parallel white lines on the forehead, arms, shoulders and chest, an imitation in paint of the sacred white ash the Virashaivas often smear themselves with. The idea was to retain the statue as a “sign of domination and control” thereby sending a clear signal of Virashaiva’s triumph over Jainism.

Another interesting example of such a reuse comes from the Megudi temple at Hallur, Karnataka. Here, as opposed to Aadargunchi, the temple was converted in situ, sans any extensive rebuilding.

Constructed between the 7th and 9th centuries, the Megudi temple was reused as a Virashaiva shrine sometime in the 12th century. Here the Jina idol was uprooted from garbagriha, smeared with sacred Virashaiva ash, and placed in the central aisle that now leads to the sanctum sanctorum housing the Shiva linga. Such a placement of uprooted idol ensured that every devotee approaching the inner chamber would see the displaced Jina and be aware of the Virashaiva “annexation” of the temple.

To further bolster the “conquered image” of the temple, two sculptures of the Jina adorning the main entrance have also been significantly disfigured even though all the other sculptures, inside and outside the temple, have been kept intact. Appropriations, as glaring as the above mentioned examples, must have inspired significant awe in the newly converted followers of Virashaivism and deep anxiety in the Jains.

However, not all examples of architectural reuse in the Virashaiva-Jain case signify conquest. Several syncretic examples exist such as the temple at Kagvad, Karnataka, where both the Virashaivas and the Jains worship side by side. When the Virashaivas appropriated the temple of Kagvad they took the ground floor and lined up all the Jina statues on a stepped pedestal at the centre of the temple.

The Jina statues were consecrated to Virashaivism this time by dabbing sandalwood paste on to the statues. Unlike the other two examples, no Shiva linga or Nandi sculpture was constructed at the Kagvad temple. Instead, the Jina idols are framed in tiny metal trishula (trident, weapon of Shiva) symbolising Shiva. Thus, the ground floor is today full of Virashaiva worshippers venerating Jina idols encased in trident frames, while the first and second floors houses Jain worshippers.

The incorporation of Jina idols in Virashaiva worship would have been nothing short of revolutionary given how staunchly monotheistic the religion is.

By reusing older edifices for newer purposes, the Lingayats broke no new ground and were merely following the age-old practice of employing architectural reuse out of necessity and to signify either annexation and/or assimilation.

An inability to grasp the complexities of such a layered phenomenon compounded the colonial historian’s problem of grappling with the dynamic between myriad Indic sects. This was eventually solved by grouping these sects under the umbrella of “Hinduism”. This ensured that such vibrant examples of architectural reuse gradually petered out of public memory. The Muslim invader became the culprit and Babri, a battlefield.