The VHP-RSS failed to give their followers anything new, even as Uddhav took the fight straight to PM Modi’s door.

The Vishva Hindu Parishad’s (VHP) show of strength in Ayodhya on November 25 turned out to be a damp squib.

Neither could the VHP collect the 2 lakh people it had announced as the expected crowd, nor did it manage to send any new message to the Bhartiya Janata Party’s (BJP) Hindu constituency, apparently to consolidate which the mega event was organised.

What made it worse for the VHP-BJP combine was the common feeling that it was their rival Shiv Sena’s chief Udhav Thackeray who stole the show with his previous day’s event, even though that programme had one-tenth the crowd that converged at the VHP’s Sunday ‘dharam sabha’ — which pulled an estimated 50,000 volunteers. Uddhav Thackeray has managed to make some noise with his Ayodhya visit. (Photo: PTI)

Thackeray’s new slogan – “Har Hindu Ki Yahi Pukar, Pehle Mandir Phir Sarkar” became a big hit, compared with the VHP’s traditional and oft-repeated slogan, “Ram Lalla Hum Aayenge, Mandir Yahin Banayenge”.  His challenge to the BJP to announce a definite date for starting the construction of the temple also seemed to strike a chord with the crowds, which had converged here from different corners of the state and even some neighbouring states in the hope that the VHP would do more than lip service.

In an oblique attack on Prime Minister Narendra Modi, Uddhav remarked, “Kewal 56 inch ka seena hona kaafi nahi hai; uske andar ek dil bhi hona chahiye, jisme ek mard jeeta ho (it is not enough to have a 56 inch chest, what one must also have is a heart of a man inside).” He added: “If the BJP enacts a law to construct the temple, the Shiv Sena will surely support it.”

The only common point between the Shiv Sena and the VHP was that both harped on legislation for the temple — clearly unconcerned with the Ramjanmbhoomi-Babri Masjid legal battle pending in the Supreme Court.

In 2010, the Allahabad High Court had ordered division of the disputed land into three parts — two for the temple and one for the mosque. Both sides appealed the verdict in the apex court.

In a none-too-cheering news for the VHP, on Sunday, its ‘dharam sabha’ — which drew many seers from various places — eventually concluded an hour before schedule, as volunteers started leaving the sprawling venue. Clearly, neither the seers nor leaders of the RSS, VHP and other Hindutva outfits had anything new to say. 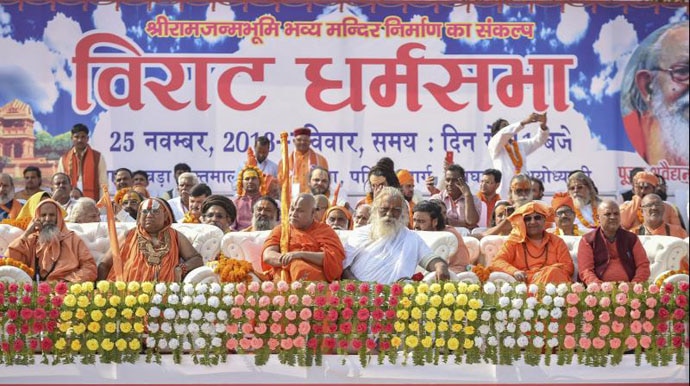 The VHP, the main organiser of the show, did not even care to pass a formal resolution. Senior RSS leader (sah karyawaah) warned, “Mandir ke nirmaan hone tak na chain se baitheinge, na chain se baithne denge (Till the temple is constructed, we will not rest — nor will we let anyone rest).” However, he did not specify who he was addressing his warning to.

The VHP, the RSS and the seers made it a point to reiterate that they wanted entire disputed land for the temple, with several speakers at the meet making it loud and clear that the Allahabad High Court order was not acceptable to them.

Mahant Rambhadracharya, head of a Chitrakoot-based prominent Hindu congregation, sought to convince the crowds that Modi would do his best to pave the way for the proposed temple. He claimed that a top minister of the Modi cabinet had confided in him that the central government would do something concrete for the temple at the next Parliament session.

Yet another seer, Swami Hans Devacharya, showered praise on the PM by observing, “Main kah sakta hoon daawe ke sath ki achchhe din aaye hain. Ek baat jaan lo ki kendra mein agar koyi sur sarkar hoti aur prant mein koyi aur sarkar hoti to kya hum sab yahan hote? Kya aap yahan hote ? Hum sab jail mein hote (I assert that achchhe din are here. Had there been some other government at the Centre or in the state, could we have all gathered here? No, we would have been in jail).” The VHP-RSS had nothing new to offer to the constituency the event was apparently aimed at. (Photo: PTI)

What became amply evident was that despite the BJP’s ostensible bid to maintain its distance with the Ayodhya event, the strong bonds between the party and its Hindutva allies were clearly visible. Sure enough, the mega event had the blessings of both the saffron-clad UP Chief Minister Yogi Adityanath as well as the Centre. Veiled warnings and threats issued by some saffron leaders were more a part of posturing by their respective outfits, which are clearly a part of the sangh parivar.

Still, it was the Shiv Sena which evidently managed to serve its purpose of throwing the gauntlet at Modi, whom Udhav Thackeray went to the extent of referring to as “Kumbhkaran who had been sleeping for four and a half years.”

His critics, however, felt that the same question could be asked to him. “If Thackeray is alleging that Modi had been sleeping for 4.5 years, he also ought to clarify what was he (as a BJP ally) doing in the same period,” asked a critic.

The fact remains that both BJP and Shiv Sena have started raising the temple pitch only as the next General Elections come closer.

Neither the Centre nor any party claiming to represent Hindus in the long-pending legal battle had cared to even move an application before the Supreme Court for an early hearing. The request was only made as late as in October, when the Chief Justice of India refused to hear the case on priority and chose to list it in January.

Many believe that Sunday’s hype created in Ayodhya was meant to not only keep the Hindutva forces in good humour, but more importantly, to indirectly convey to the apex court  that the issue was on the boil and that Hindus were getting restive.

That was the reason why some Hindu outfits went about issuing threats of ‘creating a 1992-like situation’ again. The Babri Masjid was pulled down by Hindu karsewaks on December 6, 1992.

After all, the commotion over the Ayodhya case has begun only after the Supreme Court declined to give priority hearing to the case. Shiv Sainiks wait at Thane station to board a train to Ayodhya. This time, Uddhav has the first mover's advantage. (Photo: PTI)

Shiv Sena chief Udhav Thackeray was quick to announce his schedule for Ayodhya. Close on its heels came the declaration of the VHP to stage a massive show in the ancient temple town. The common expectation was that the VHP event would overshadow Thackeray, whom the UP government even denied permission to hold a public rally.

He had to remain content with a small meet within the precincts of a local Hindu institution known as Lakshman Qila, where he met some seers and addressed Shiv Sena activists. He performed ‘arti’ on the banks of the Saryu river the same evening, followed by prayers at the makeshift Ram Janmbhoomi temple that stands on the debris of the razed mosque.

But at the end of the day, it was the Shiv Sena chief who managed to score over the VHP-BJP in the game of one-upmanship to serve their respective political agenda. As far as the temple is concerned, both drew a blank.