Free speech includes strong speech. But this build-up is more than that.

One part of freedom of religion stems from free speech — the right to express, proclaim, celebrate and even propagate your faith in any way within the requirements of the public order, health and morality.

The second part is that the state shall remain neutral, without siding with any faith, but celebrating all, which I have elsewhere called ‘celebratory neutrality’.

India’s secularism is supposed to draw people together to live in peace and harmony while retaining their personal and religious identity. But in India, the living contradiction is that while the Constitution’s secular agenda is meant to apply to the state and public governance, its civil society is not secular, but deeply divided. This divides India.

Given elections, the phantom menace of communalism abandons tolerance for political glory. 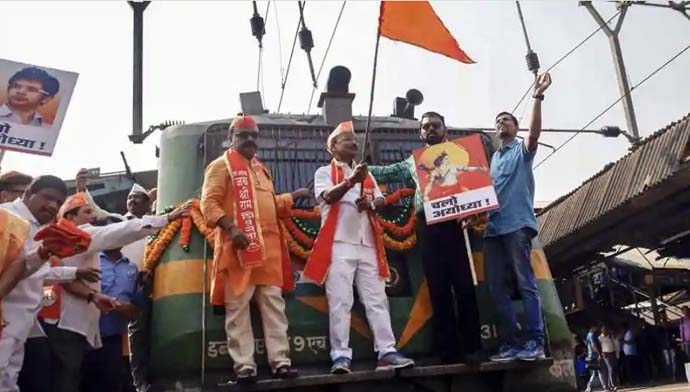 The build-up in Ayodhya has strange antecedents.

In the nineteenth century, the ‘chabutra’ was an act of trespass. The Nirmohi Akhara’s predecessor fought a civil case claiming title in 1885, but the Muslim claim to property was upheld, conceding prayer to Hindus.

With the rise of the Hindu Mahasabha in 1934, the mosque was damaged and later repaired.

In 1949, another trespass was paraded as a miracle. Opportunist officer Nayyar simply refused to obey orders from Centre and state.

The ‘lock’ incident of 1987 showed communal partiality across the political spectrum.

Finally, the Babri Masjid was smashed on December 6, 1992 following rath yatras by Advani and Joshi, supported by the aspiring Modi.

This was followed by Gujarat in 2002. There have been cow campaigns, ghar wapsi, murders, communal riots. Every Indian of any variety needs to ask: How can India survive this to create a society in which there is no freedom from fear from the state, political parties and civil society. All courtesy the British taxpayers.

One question immediately comes to mind: what about India?

What is expected is an untidy pageant of 14,000 bikers, Jeeps, SUVs, buses and trains.

BJP MLA Surendra Singh has warned that as in 1992, the ‘crowd’ could take the law into its own hands. BJP Ravindra Khushwaha says a Bill for temple construction will be placed in Parliament on December 11, 2018.

How can Shiv Sena hijack the #RamMandir issue? The people who thrash north Indians and drive them out, who don’t even have the mentality to serve humanity, how will they serve lord Ram? : BJP MLA Surendra Singh pic.twitter.com/0eWDqUbm4k

The government cannot table or support such a Bill since it is the Supreme Court appointed statutory receiver.

The state government, headed by then-CM Kalyan Singh, could not protect the government. In the present assertions in 2018, the state has now organised seven paramilitary, police and 20 companies of the Provincial Armed Constabulary (PAC), and two RAF Companies. The town will be as in a state of siege, divided into eight zones and 16 sections, with barricades.

Visuals from Ayodhya. VHP and Shiv Sena are organising separate events in the city today over the matter of #RamTemple. pic.twitter.com/kKKFBhaTR0

Is this free speech and the exercise of freedom of religion?

As an unforgiving defender of free speech and plural diversity, I would support non-violent demonstrations of any kind.

Free speech includes strong speech. But this build-up is more than that. It is not a celebration of faith, but coercive and intimidatory.

The British answer lay in the ‘law or order’ state to prevent such demonstrations, ban, censor and separate and leave it at that.

But the voice of secular togetherness is not just the concern of a fractured civil society. Ayodhya and Sabarimala have set up challenges for India’s secularism. (Photo: Reuters)

It also lies with the state and state agencies to promote to secular peace and harmony. This is a positive obligation correctly entrenched by Bommai’s case (1993). In our present case, the voice of Modi, Adityanath and politicians must, in the first place, refrain from religiously supporting this religious build up.

In the second, they must make it clear that they defend the rights of minorities. In one sense, they could use this neutrality politically. But thirdly, the positive obligations of secularism require positive assertions other than providing police, army and barricades. But CM Adityanath has gone well beyond his negative and positive obligations in changing names of towns like Allahabad and spending huge state money on the Kumbh mela — not just for safety but to advance the majoritarian faith of Hindus.

Ayodhya and Sabarimala have set up challenges for India’s secularism.

So far, the independent India has nationalised temples instead of leaving them in community hands, subject to temple entry for untouchables.

The state’s duty should end in ensuring financial and health probity.

This is what Justice Dipak Misra (as he then was) did in the Kalka temple case.

It cannot and should not pronounce on issues of faith — not even the Supreme Court. We cannot totally go the way of French laïcité to prohibit any public expressions of faith, other than its concordat with church.

The distinction between public and private religion endowments needs to be reworked.

In India, it is not feasible or desirable to ban religions being celebrated publicly which, with secular sensitivity, other communities join in. But enjoying public space is one thing and using it to intimidate, coerce and embarrass others is contrary to bring the nation together. All this needs a rethink.

Ayodhya’s controversies are sadly too one-sided. I feel that if Lord Ram had a say he would say: “Don’t build a temple for me. Just look after all people irrespective of their faith. That is the message of Ram Rajya.”

Also Read: Ram Mandir, Sabarimala, Nehru Museum: How the war is now between 'my saffron' and 'your saffron'