Without being on the inside track or especially in the know of things, I had predicted in this very column on May 30, 2018, that Baijayant ‘Jay’ Panda quitting Biju Janata Dal (BJD) would be a huge gain for the Bharatiya Janata Party (BJP).

A tiny news item tucked away in the corner of leading newspapers on Monday, May 28, 2018 had announced Panda’s resignation from the BJD.

The likelihood of his joining the ruling party fructified when, on the auspicious occasion of Maha Shivratri on March 4 this year, Panda formally joined the BJP. This is how he announced it on his official Twitter handle:

Nine months of introspection & widespread consultations w/colleagues & public.Grateful for support recd from all over.On auspicious #MahaShivratri I've decided to join @BJP4India & work under the leadership of @narendramodi Ji to serve Odisha & India to the best of my ability????

He was welcomed by Dharmendra Pradhan, Union petroleum minister and the BJP’s tallest leader from Odisha. Panda then met Amit Shah, the party president, and was formally admitted to the BJP fold. One can only guess at the negotiations that went on behind closed doors before this significant changeover came to pass. Some say that Panda is not to contest the upcoming Lok Sabha polls but lead the party in the coming state elections.

Be that as it may, if the BJP wins big in Odisha, especially if it is in a position to form the government, and if the credit for this goes to Panda, he would surely make a very compelling chief ministerial candidate.

Panda is not only a formidable and dedicated leader, having won convincingly from Kendrapara, but is also one of the most well-spoken, well-educated, and well thought-of politicians in India. He also has pedigree, hailing for a distinguished family, as also the wherewithal to back his political ambitions. Put plainly, politics is not a get-rich quick avenue for Panda; instead, it constitutes the larger sphere for the actualisation of his manifold talents and aspirations. 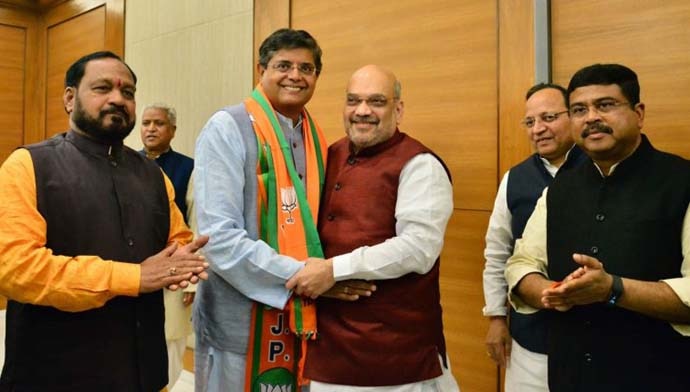 Panda’s detractors cavil that he doesn’t have the mass following or appeal that would take him to the heights of Odisha politics. Fine, but neither, arguably, does the present chief minister, Naveen Patnaik. Patnaik, who assumed office in March 2000, riding on the legacy of his legendary deceased father Biju Patnaik, has surprised naysayers by turning out to be the state’s most successful CM.

Without quite being a mass leader, some say without even knowing Odiya, he has ruled Odisha for some 19 years now, longer than any other CM in the history of the state, including his own, more popular father.

This, of course, brings us to the real nub of the news: can Panda upset Patnaik’s political applecart — or should we say juggernaut? That question can only be answered at the hustings. But what is clear is that the BJP, despite an increasing presence of Odiyas at the national level in the party, still has a long way to go before it can pose a serious threat to the BJD in Odisha.

To that extent, Panda has his work cut out for him. To be effective, he needs the unconditional backing of the party as well as the support of the rank and file. Infighting at this stage, with established leaders and cadres trying to undermine the new entrant, would be disastrous to the party’s poll prospects. Has the party done enough to ensure this? But even if Panda isn’t as successful as hoped in his own state, he still has an outstanding record as a parliamentarian at the Centre, having served quite ably and impressively for some 18 years as a member of Parliament.

As the erstwhile spokesman of BJD, he was certainly eloquent, articulate, reasonable and had statesmanlike presence on national television. Having heard him speak on numerous occasions as well as interacted with him in person I am sure that he is not only gracious and interesting, but also inspiring and charming. At the risk of repeating myself, I cannot but say that he is one of our ablest and most competent public figures, a brilliant thinker and speaker, with new ideas and plans for the nation. He also has a clean and likeable image. He will certainly prove a great asset to the BJP if jealousy and pettiness do not conspire to clip his wings.

Panda can contribute to the BJP both at the regional and national levels. He can do well in a variety of ministries including metals and mining, which is his family business, finance and economics, science and technology, not to speak of urban affairs, tourism, external affairs, and aviation.

I mention the last because he is a qualified pilot, besides being widely travelled. Indian politics is at once a game of chance as it is a game of thrones. Panda, at 55, is still quite young compared to his peers, over whom he has had a head start. Even if he has some distance to cover before he reaches the top, whether in Odisha or at the Centre, the road ahead certainly looks promising and filled with hopeful prospects.

#BJP, #BJD, #Naveen Patnaik, #Jay panda
The views and opinions expressed in this article are those of the authors and do not necessarily reflect the official policy or position of DailyO.in or the India Today Group. The writers are solely responsible for any claims arising out of the contents of this article.