India needs to be cautious on granting asylum to Baloch leader

Brahumdagh Bugti is the leader of a powerful tribe which has widespread control over a strategic piece of land.

Prime Minister Narendra Modi's August 15 speech, in which he raised the issue of Pakistan's atrocities on the people of Balochistan, seems to have set things in motion.

The Pakistani media reported on September 15 that Baloch leader Brahumdagh Bugti, currently in exile in Switzerland, is set to get Indian citizenship after long negotiations with Indian authorities.

According to Pakistan's Geo News, Bugti will formally apply for Indian citizenship in Geneva after a meeting of his Baloch Republican Party (BRP) on September 18 and 19.

On September 16, Prasar Bharati plans to launch a website and mobile application for  All India Radio's Balochi service to reach out to the masses who speak the language across the world. The move to start the service is also in the backdrop of Modi's speech.

India plans to give citizenship to Bugti's key lieutenants in Switzerland as well, including his trusted aides Sher Muhammad Bugti and Azizullah Bugti, sources told Geo News. Outlawed by Pakistan, Bugti is founder of BRP.

On September 13, around the time the 71st session of the UN General Assembly opened, a group of Baloch activists held protests against Pakistan outside the UN headquarters, demanding freedom and highlighting the country's crimes against humanity in Balochistan.

The protestors accused Pakistani forces of killing around 5,000 people in the past few years and causing nearly 20,000 forced disappearances in Balochistan.

Baloch demonstatrion were also held in Dusseldorf, Berlin and Munich on August 30, in the hope that the UN, US, UK, Germany, and the European Union will raise their voices to save the people.

Agitations in London, America, Geneva, Canada, Norway, Sweden, Germany are not new; they have been going on for long but got little media coverage earlier.

On September 4, while talking to the Indian media, Bugti, accused of violence in Pakistan, sought help and hoped the Indian government would issue an Indian ID as well as travel documents, claiming that his family was not safe in Switzerland .

Bugti further said Pakistan was trying to create international pressure by trying to get a Red Corner notice issued against him, and that's why he was seeking India’s intervention to ensure safety for himself and his companions.

Presently, Bugti runs his party from Switzerland without official authorisation from its government. He also claimed that the Swiss government, which declined his application for an official ID in January 2016 since the BRP was on the terror watchlist, was creating hurdles in his work because of pressure from Pakistan.

But he is now full of hope from India. He said: “I hope the Indian people who gave refuge to His Holiness the Dalai Lama and supported Sheikh Mujibur Rahman, would recognise the risk that I am facing." 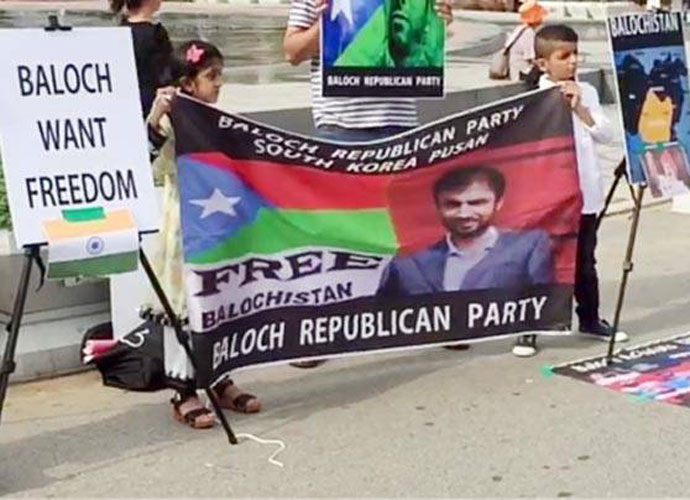 While the the Indian government has recently been proactive in highlighting Pakistan's rights violations in Balochistan by citing incidences of abuse of the Baloch, there are areas of sovereign decision-making that can be cited when it comes to the matter of granting a visa or a temporary Indian ID to Bugti and his companions.

There are two views. Some experts on international affairs advocate that India can help Bugti and his colleagues by preventing international organisations like the Interpol from accepting Pakistan’s case against Bugti.

India too got several Red notices issued in the past against dons like Dawood Ibrahim and Chhota Shakeel, allegedly given shelter by Pakistan, but the country ignored them. So, India too can ignore notices issued by Pakistan against Bugti.

But former external affairs minister Natwar Singh advises “caution”. “India should study his case well before granting him asylum. Caution is the need of the hour as he is the leader of a powerful tribe which has widespread control over a strategic piece of land,” he said.

Now the million dollar question is whether the Indian government will provide asylum to Bugti and stand behind the Baloch in their struggle for freedom, and will India play a pro-active role in ending human rights violations and atrocities of Pakistan against them?

Who is Brahumdagh Bugti?

He is the grandson of slain Baloch nationalist leader Akbar Bugti, one of the tallest leaders among Baloch nationalists. The 36-year-old Brahumdagh Bugti fled his hometown Dera Bugti in Balochistan in 2006, following the assassination of Akbar Bugti. He lived in Afghanistan as a state guest first, and was then flown to Switzerland in October 2010. He has been living there since, in political asylum, with his family.

The cause of the struggle

- Under British rule, Balochistan was divided into four princely states. According to the Pakistani version (disputed by many), three of the princely states - Makran, Las Bela, Kharan - decided to merge with Pakistan. But the Khan of the biggest princely state, Kalat, Mir Ahmad Yar Khan, respected his people's sentiments and decided against a merger with Pakistan.

- The state of Kalat was declared independent on August 11, 1947, as its people were against the idea of joining Pakistan. Kalat functioned as an independent democratic country for about eight months.

- After the formation of Pakistan, Mohammad Ali Jinnah formally requested Kalat to merge into Pakistan. On December 16, 1947, Kalat's elected representatives debated Pakistan's request for merger in parliament and unanimously rejected it. The people of Kalat believed that although they    are Muslims, they are socially and culturally very different from Punjabi Muslims who dominated Pakistan's polity.

- As soon as Kalat rejected Pakistan's request for merger, Jinnah ordered the Pakistan Army to invade and annex Kalat. The army forced/coerced then ruler Ahmadyar Khan to sign a treaty of accession against the will of the majority. Ahmadyar Khan tried everything possible to prevent the accession.

Also read: Balochistan is nothing but Modi’s new jumla

Post your comment
#Pakistan, #Brahumdagh Bugti, #Balochistan
The views and opinions expressed in this article are those of the authors and do not necessarily reflect the official policy or position of DailyO.in or the India Today Group. The writers are solely responsible for any claims arising out of the contents of this article.