Its 11th General Elections have in fact left Bangladesh poorer in terms of its democratic processes, diversity and freedoms.

Since its emergence as an independent nation in 1971, Bangladesh’s democratic journey has been anything but inspiring. The very fact that the country recently conducted its 11th General Elections — in such a short span of its democratic existence — testifies how tumultuous its path has been.

The outcome of the election further attests to this trend.

The Awami League, incumbent Prime Minister Sheikh Hasina’s party, and its alliance partners won more than 90 per cent seats — leaving the country more polarised than before.

Even before the final votes were counted, the Opposition was calling for fresh polls, accusing the ruling party of ‘mass rigging, use of state power and violent means’ to influence the electoral outcome. Prime Minister Hasina had been seeking an unprecedented third term after winning the 2009 and 2014 elections in a row. She won the 2014 polls unopposed, as the main political opposition, Khaleda Zia’s Bangladesh Nationalist Party (BNP), boycotted the contest.

Thus, the 11th General Election was of utmost significance.

Going into polls, the BNP was leaderless, with Khaleda Zia incarcerated over corruption charges — making her ineligible to contest —and her son in exile on charges of murder. The united Opposition, called the Jatiyo Oikyo Front, headed by the 82-year Oxford-trained lawyer and former Awami League minister Kamal Hossain, was seen as no challenger to Hasina’s political dominance.

Yet, given that Hasina’s two-term tenure was marked by high-handed measures, such as the arrest of popular artist and journalist Shahidul Alam, and a violent crackdown against protesting students some months ago, and major opposition figures had united against the ruling party, it was expected that the polls would throw up some surprise. 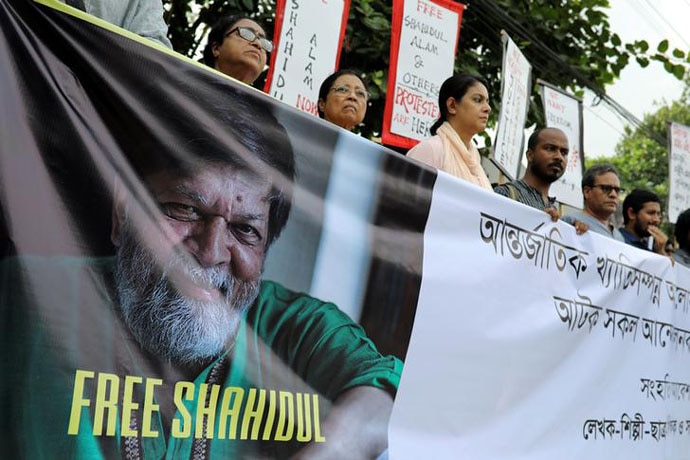 Hasina had received flak for high-handed measures, such as the arrest of journalist Shahidul Alam. (Photo: Reuters)

However, many analysts are attributing Hasina’s complete electoral dominance to her stellar role in maintaining high economic growth, creating millions of jobs and her able handling of the Rohingya refugee crisis.

Will such a brute majority for the ruling party advance the cause of democracy in a country that has a long history of political polarisation and violent mobilisation?

Unlikely — and for many reasons.

First, the scale of victory — in which the Opposition has just 7 members (the Awami League won 288 out of 299 seats) — will hardly allow them to question and corner the government on key policies. This effectively betrays the basic democratic principle of checks and balances. Ironically, the Awami League had won fewer seats — 234 — in the 2014 poll, which the main opposition had boycotted.

This raises serious doubts about the integrity of the electoral process, notwithstanding Hasina’s popularity and performance.

For instance, key members of the country’s Election Commission openly accused each other during the course of electioneering. Independent sources are now piling up ‘evidence’ of rigging, and some of these are being prominently circulated on social media.

For the record, no opposition party in Bangladesh has won an election when the ruling party was controlling the state machinery — Bangladesh has had a popular tradition of having a non-partisan caretaker government to facilitate General Elections. This tradition was stopped by Hasina’s government in the 2014 polls. With Khaleda Zia in jail, Bangladesh has no leader to match Hasina's stature. (Photo: Reuters/file)

Thus, with the Election Commission having a crisis of credibility — and apparently clueless about purported rigging and other alleged malpractices — the election results will further harm the country’s fragile democratic space.

Second, authoritarian tendencies and strong-arm tactics against the Opposition had marked Hasina’s second tenure. She was accused of pursuing vendetta politics by jailing Opposition leaders, clamping down on press freedom and taking many draconian measures, including the arbitrary arrests of protesting students, ‘disappearances’ of journalists and bloggers.

The most recent such development was the passage of the Digital Security Act 2018. Critics called the Act an important instrument of the state encroaching on freedom and political speech in the country.

Thus, many analysts believe that an unprecedented third term with a vanquished Opposition might drive Hasina’s government towards more authoritarianism and a one-party democracy.

The biggest threat to the country’s democracy stems from the shrinking political space. Historically, such closing of political space in a democracy often drives a country to chaos, extremism and a nihilistic path. A weak Opposition, pliable democratic institutions — including the judiciary, the election commission, a discredited press — and vulnerable civil society organisations allow unprecedented power to the ruling party to dominate political narratives.

If this happens, Bangladeshi society will have to bear the consequences sooner than later.

It may be recalled that since 1994, Bangladesh’s democracy has been mired with fractious politics between two warring Begums. Violence is a persistent phenomenon of this politics, including factional killings and murders of top leaders.

The young nation, which will celebrate fifty years of its existence soon, represents a rare kind of political polarisation where two principal parties do not treat each other as political adversaries — as observed in most democracies — but as enemies. Elections are treated as winning trophies.

Where does Bangladesh’s democracy go from here?

Will another sweeping mandate for Hasina make Bangladesh a model of political stability and resilience? Or will it keep bleeding this highly polarised country, impacting its growth and development? There are no easy answers.

But one thing is clear for sure — the 11th General Election has left Bangladesh’s democracy poorer.

The country may emerge as a tiger economy in South Asia — but at the same time, it may join the ivy league of illiberal democracies, something that enjoys greater global currency now!

Also read: Bangladesh Parliamentary polls: Resounding victory for Sheikh Hasina. But what next?

Post your comment
#Shahidul alam, #Sheikh Hasina, #Awami League, #Bangladesh elections
The views and opinions expressed in this article are those of the authors and do not necessarily reflect the official policy or position of DailyO.in or the India Today Group. The writers are solely responsible for any claims arising out of the contents of this article.