Fans, Foes, Fundamentalists: How Bangladesh's polity is shaping up after the Parliamentary polls

A fortnight after Bangladesh's Prime Minister Sheikh Hasina bounced back to victory after achieving an overwhelming margin (December 30), she has fixed her priorities right and seems to be on a road map with a clear vision after forming a cabinet with reputedly lightweight ministers.

The old stalwarts, like Tofail Ahmad, Amir Hussain Amu, Hasanul Haq Inu and Motia Chowdhury, have been dumped. This relatively inexperienced team will probably be easy to manage and the chances of any defiance, dissent or challenge are likely to be minimal.

Hasina’s remarkable victory has politically consolidated her position and she is naturally very buoyant with the convincing triumph. Yet, she has to be on guard from the anti-liberation and fundamentalist forces who may pose impediments on her march towards development and a corruption-free Bangladesh, which were in her election manifesto. To remain committed to these election promises, Hasina is working overtime to achieve her objectives. 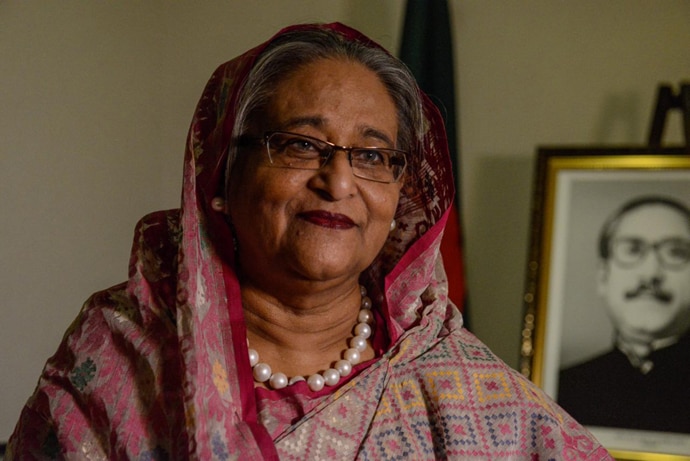 Stronger than ever: Hasina’s remarkable victory has politically consolidated her position. (Photo: Reuters)

In pursuit of her objectives, Hasina chaired a high-level meeting of Prime Minister’s Office (PMO) officials on January 13 and made her seriousness amply clear to the bureaucracy, calling upon the officials to deliver on all counts. She said she would come down heavily on the malaise of corruption, the menace of narcotics and terror and made an appeal to all the officials to strive and ensure that developmental programmes remain high on the agenda.

She cautioned her civil servants that under no circumstances would anti-liberation forces be allowed to come to power.

Taking huge pride in Bangladesh’s rapid growth and development, Hasina said even Pakistanis are stunned to see the all-round development of her country.

In the same vein, she reiterated her resolve to transform Bangladesh into a middle-income country by 2021 and a developed and a prosperous country by 2041.

Hasina further outlined her plans to observe Sheikh Mujib's centenary year in a befitting manner by marking 2020 and 2021 as 'Mujibborsho'. It would seem from her directions to officials laying down clear aims and objectives that the Prime Minister is serious with her agenda and she would achieve these tasks at any cost.

However, Hasina needs to approach the Islamic fundamentalist parties with abundant caution.

Hasina’s pre-election tacit alliance with a fundamentalist party, based in Chittagong, known as Hefazat-e-Islam, gave some hiccups to the government in the very recent past when its nonagenarian leader, Shah Ahmed Shafi uttered some regressive remarks.

While addressing a gathering at the Ahlia Darul Ulum Moinul Islam Madarsa in the port city of Chittagong, the zealot called upon women to not pursue education beyond a certain class as higher education exposes them to vulnerability. His remarks were very primitive and evoked medieval ages. His words also drew sharp criticism from the secular and forward-thinking forces – especially women folk in the otherwise progressive society in Bangladesh. It must be borne in mind that Bangladeshi women are very progressive, the literacy rate in the country is very high and women's empowerment is adequate with women participating in every sphere of activity. Optics of some burqa or hijaab-clad women should not give an impression that women are backward in Bangladesh.

In fact, society’s adverse reaction on the Hefazat leader’s statement shows that women in Bangladesh will no longer take the diktats of zealots quietly. Their reaction led to the leader blaming the media for 'distorting' facts on his statement and he was on the backfoot, taking back his earlier statement even, realising that such comments would not augur well when Bangladesh, under Hasina, has set its goal so clearly.

It’s up to Hasina to rein in such clerics, putting them on a tight leash. Hasina’s endorsement showed in her slew of concessions granted just before elections to Hefazat, relaxing the Madarsa curriculum in an apparent bid to absorb such products into the mainstream. Distancing from such fundamentalist forces now should be the key word for Hasina.

Now that every other part of the polity seems to be falling in place, apparently in favour of Hasina, she needs to focus on development and on her relentless fight against corruption. This said, she also displayed high-class statesmanship by proposing to hold talks with the badly-trounced Dr Kamal Hossain, leader of Jatiya Oikya Front, as disclosed (January 13) by Dr Kamal himself who welcomed Hasina's initiative describing it as a positive step in continuing the dialogue process.

In a masterstroke, she has thus neutralised her political opponents, paving a clear road for an all-round forward march, almost unrivalled.

Meanwhile, all eyes are fixed on January 19 when Sheikh Hasina is poised to address a grand rally at the Suharawardy Udyan to mark the great victory of the ruling Awami League. Hasina’s speech is expected to be a significant one, strengthening party cadres and displaying her formidable strength.