The election assumes greater significance this time due to PM Sheikh Hasina’s display of political astuteness in engaging with her political adversaries.

Electioneering is at full throttle across Bangladesh ahead of the December 30 general elections. The election-related activities assume greater significance this time due to Prime Minister Sheikh Hasina’s display of political astuteness in engaging her political adversaries into what is being described as 'dialogue'. Such adversaries include the Jatiya Oikya Manch — a conglomerate of rightist parties — and a more significant faction led by Gano Forum chief and former foreign minister under Sheikh Mujibur Rahman, Dr Kamal Hossain.

It would be worth recalling that Hossain, a constitutional expert and Mujib-Hasina loyalist, floated a separate platform against Hasina just before the elections to take on the formidable Awami League. 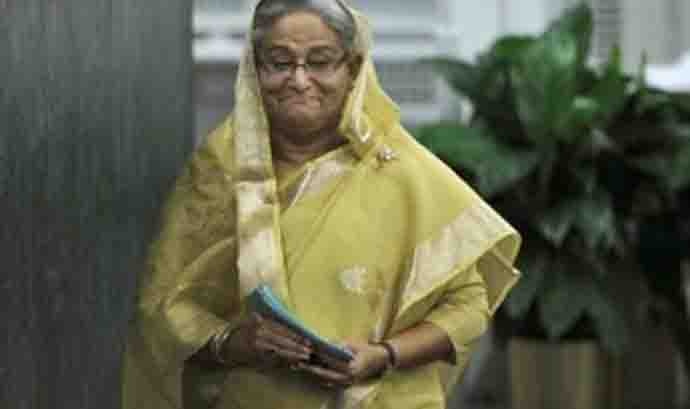 Sheikh Hasina and her Awami League are riding on the waves of optimism. (Credit: Reuters file)

However, more surprising is Hossain's volte-face in consistently pressing for Begum Khaleda Zia’s release from prison and canvassing for the Bangladesh Nationalist Party's (BNP) participation in the elections as an ally. There were a slew of dialogues between Hasina and the Oikya Manch’s delegates that started from November 1. They have locked horns mainly over the release of Khaleda.

Simultaneously, former President of Bangladesh AQM Badruddoza Chowdhury, a former BNP cadre, had initially allied with Hossain but parted ways as Chowdhury (of the erstwhile Bikalpa Dhara) distanced himself from the former on the grounds that Hossain was supporting the BNP that has partnered with the fundamentalist Jamaat-e-Islami (JeI).

Chowdhury realised through straws in the wind that the BNP was a 'burden' and taking it along will be an electoral suicide. However, he too held a dialogue with Hasina. General HM Ershad of the Jatiya Party (JP) followed suit. Ershad, as of now, is with Hasina but talks with the Oikya Manch did not yield any results and things are in limbo and unlikely to show any tangible results. People gather with banners at the Suhrawardy Udyan for the maiden rally of opposition alliance called Jatiya Oikya front in Dhaka on November 6. (Credit: Reuters)

Meanwhile, the Awami League's growing warmth towards Islamic fundamentalist Hefazat-e-Islam has raised eyebrows among a section of the liberals in Bangladesh. And such elements are not off the mark. Their argument is the same that Hefazat, perceived to be a diehard communal outfit with its hate actions in 2013 silencing liberals and abetting terror, perpetrated through hate crimes, has now tied up with the Awami League.

Political analysts, however, reckon that this is political masterstroke by Hasina because of the following: activities of Hefazat in May 2013 had elements of violence. From there, the moderation that is now seen in Hefazat is a positive development. There are almost 1.4 million students studying in 14,000 Qawmi Madrasas in Bangladesh. Most of the students are very poor and many are orphans.

By recognising the madrasa’s degree, the government has taken a very positive step in bringing these students into the formal employment circuit in the country. By coming close to Hefazat and conceding to its list of demands, The Awami League has tactically neutralised the Hefazat's communal aggression. The recognition of degrees is expected to enable the madrasa students to compete with students from the mainstream education stream for jobs both in public and private sectors.

Also, keeping these huge number of poor students outside the formal job market would mitigate a great danger of these young people becoming radicalised. The banned extremist organisations would exploit the situation to the maximum possible extent. Further, mainstreaming the madrasa students would expose them to the wider society and to the enlightened world weaning them away from the medieval and antiquated thoughts.

All this is fine, but Hasina should be hawkish in keeping an eye on Hefazat activities in the longer run.

Fanatics, in the past, have always let down democratic governments. Be it the Taliban in Afghanistan or the latest misdeeds of the Tehreek-e-Labaik Pakistan (TLP). The TLP initally gave signals that it was all for Imran Khan. But in the infamous Asia bibi acquittal case, it held the government to ransom.

Hence, in the context of Bangladesh too, caution is called for. Hasina perhaps took a calculated risk in addressing a Hefazat gathering at Dhaka’s Suhrawardy Udyan openly engaged in bonhomie incurring the wrath of the minority and liberals who are opposed to or are victims of Hefazat-e-Islam. Hasina, on the other hand, appears confident to handle Hefazat keeping it on a tight leash.

Meanwhile, last week Dhaka downtown areas saw violence allegedly sparked off by BNP leading to many injuries and a law and order situation cropping up. Under no circumstances, the BNP or its allies like Jamaat should be given any leeway to take to the streets and agitate. That’s exactly what they want. A little political space to exploit the situation to their advantage.

After all, they have nothing to lose and violence will enable the BNP to stay politically afloat. By implication, they must be enjoying moral and logistical support from inimical quarters. That needs to be curbed.

Electioneering, in the meantime, is picking up steam with colourful posters and poll speeches and film actors, sportspersons and other celebrities seeking to contest in large numbers. By and large, as of now, the Awami League and party leader Hasina are riding on the waves of optimism.

This enthusiasm deserve careful restraint to ensure a decisive victory for the Awami League. And, that will be in the interest of India too.

#Khaleda Zia, #Bnp, #Awami League, #Bangladesh elections
The views and opinions expressed in this article are those of the authors and do not necessarily reflect the official policy or position of DailyO.in or the India Today Group. The writers are solely responsible for any claims arising out of the contents of this article.