Why the role of Matuas will decide who wins Bengal 2021

The Namashudras of West Bengal — who under the umbrella political organisation Matua Mahasangha — have seemingly played an instrumental role in Bengal politics.

Whether the soil from Thakurnagar was used by the makers of Ram Mandir has certainly raised a hue and cry among the Dalits in recent times. However, what is still subdued and will only show its true colour in 2021 West Bengal Assembly elections is whether the Namashudra vote share clings to its post-2008 TMC bastion or consolidates its post-2014, even more, its post-2019 shifting tensions. This article doesn't attempt to operate in the domain of psephology. It only tries to understand the socio-cultural and religious rifts among the Namashudras of West Bengal — who under the umbrella political organisation Matua Mahasangha — have seemingly played an instrumental role in Bengal politics, albeit recognised quite late by the Left regime, towards the end of their rule in West Bengal.

The aegis of Harichand-Guruchand, which started its journey in the Faridpur district of 19th century pre-partitioned Bengal, has undergone significant changes since its gradual shifting towards the mainstream political undercurrents on the eve of Partition. An organisation that sprang from the need to go beyond the traditional ‘Hindutva’ model propagated and controlled by the caste-Hindus, eventually merged with the sectarian Partition politics, partly due to the cataclysmic event of Partition and partly due to an abhorrence of Jogendranath Mondal’s model of Dalit-Muslim unity.

The independent Namashudra movement in East Bengal eventually got merged with the mainstream political ideal and by the beginning of 1940s — this was either Congress or the Hindu Mahasabha, or even the Communist Party.

So, what is now often being termed as a ‘new phenomenon’ in Matua Mahasangha’s political affiliation, especially after the 2019 Lok Sabha election and Thakurbari’s Shantanu Thakur being elected as an MP, is not new at all. This has its roots in the pre- and post-Partition political discourse in Bengal. Ever since the timid but first organised agitation from the Matuas in the form of fasting after the 2003 Citizenship Amendment Act, which compelled the politicians from Delhi to somewhat stoop to their demands, the one-point agenda of this larger ‘vote bank’ of West Bengal became prominent. As a student of social science and researcher in this field of post-Partition discourses on caste in Bengal, I find this claim having its own legitimate ground. But, my contention here is to show that the political allegiance of this part of Bengal’s demography is, on expected lines, always going to be a pro-citizenship model. 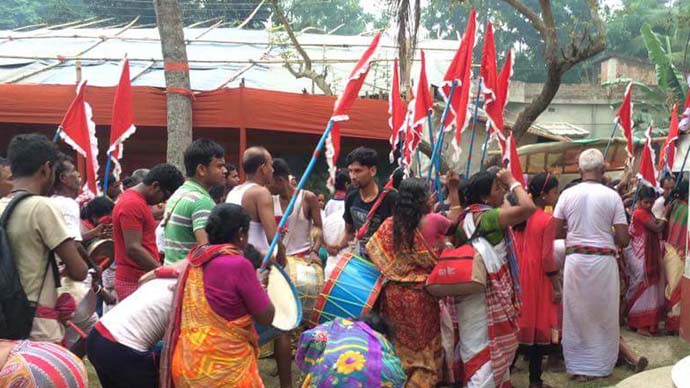 The very origin of ‘Matua identity’ is in direct opposition to the Manu-sponsored ‘Hindutva’ but existential crisis and any ‘safeguard’ in the form of established law might tilt the balance a bit. (Photo: Facebook/ @All.India.Matua.Mahasangha)

Mamata Banerjee, the leader of opposition in 2010, could very well perceive this conglomerate of ‘politics of interest’ and that paid her the dividend in 2011 and somewhat in 2016 as well. What if this dividend is shared or completely captured by another political party that can also ensure and bring back some subdued agendas in mainstream discourse by igniting some repressed but deeply rooted traumas in East Pakistan and also in post-1971 Bangladesh? I believe the recent development with regard to the much-coveted word ‘citizenship’ for these mostly Namashudra migrants has brought a real twist to the tale. It is beyond doubt that the very origin of ‘Matua identity’ is in direct opposition to the Manu-sponsored ‘Hindutva’, but existential crisis and any ‘safeguard’ in the form of established law might tilt the balance a bit. Let us not forget that a party like CPI(M) could use this model of what I call ‘existential interest’ for a long time, merely by using the idea of poor refugees. This could even nullify the ephemeral but significant presence of Jogendranath Mondal in government camps where these mostly Namashudra refugees were huddling together. Mondal sincerely protested against the caste-Hindu bureaucratic ploy to make West Bengal a caste-Hindu state by sending these refugees to places like Andaman, Dandakaranya or Malkangiri. This hardly paid him off.

In fact, these shifting tensions have always been the undercurrent of Matua identity in Bengal, which notwithstanding, intended to be an alternative religious model, has always got embedded in mainstream political domain ever since the days of PR Thakur. So, the dialectic has always revolved around a PR Thakur-model and an alternative model that can be found in works like Matua ra Hindu noy: Dalit Oikyer Sondhane (translated to Matuas are not Hindus: In Search of Dalit Unity) by Deben Thakur. It might be worthy to remember here that according to the Scheduled Caste Order of 1950, “No person who professes a religion different from the Hindu (the Sikh or the Buddhist) religion, shall be deemed to be a member of a Scheduled Caste.” The Assembly election of 2021 is going to show if anything clear emerges from the dialectic, or the game of shifting tensions continues.

#Matua mahasangha, #Namashudras, #West bengal assembly elections 2021, #Bengal2021
The views and opinions expressed in this article are those of the authors and do not necessarily reflect the official policy or position of DailyO.in or the India Today Group. The writers are solely responsible for any claims arising out of the contents of this article.

The writer is an Assistant Professor in English at Vidyasagar college and a researcher in the field of Dalit identity and politics.