The Basirhat riots in Bengal have put the light upon the two big elephants in the room - RSS and BJP’s multi-layered Hindutva strategy to execute well-planned communal discord and the issue of the ultra-orthodox concentrations of far-right Islam that stem from Bangladesh’s Jamaat-e-Islami and funding of religious and educational institutions by Wahhabi Saudi dollars.

Due to the Left’s legacy of “open border policy” with Bangladesh, there has been a gradual infiltration of people from Bangladesh into the border areas of Bengal over the decades.

Before one blames the Left, it must be remembered that “Bengali culture” is shared both by Bengal and Bangladesh, even though the majority religion differs on both sides of the border.

In the minds of most Bengalis - both in Bangladesh and Bengal - they are Bengalis, before they are Muslims and Hindus.

The states of India which were divided in 1947 have a different sense of history; people still carry the scars and the traumas of the partition of their lands which were part of their cultural consciousness and history for centuries.

Post-Partition, Bengalis have grown up with the idea of being a Ghoti (origin from the western side of Bengal or Edeshi) or Bangal (East Bengal origin; now Bangladesh) or Bati (mixed origin: Bangal plus Ghoti).

This division is behind the famous rivalry in football between East Bengal (Hilsa fish) and Mohun Bagan (prawns).

Tagore wrote his Nobel Prize-winning book of poems - Gitanjali - while visiting his family estate in the Kushtia region of Baul mystic Lalon Fakir that is now in Bangladesh.

This is the reason why no political party in Bengal can endorse Gorkhaland - the idea of Bengal getting divided once again isn’t welcomed by the larger populace and it rakes up all the disturbing memories of our history.

Now, a new disturbing era has begun in Bengal with the arrival of the RSS and BJP’s Hindutva politics, which played a significant role in the Basirhat riots - a border region where there is presence of Bengali Muslims of Bangladesh’s ultra-orthodox Jamaat-e-Islami.

The day after Eid, a Bengali Sanghi paper in Basirhat Shankhayug published a fake news story titled “Pakistan's Flag Flown during EID in Baduria. Police silent” (photo below). Baduria is in Bashirhat. The Islamic flag was misrepresented as Pakistan's flag. 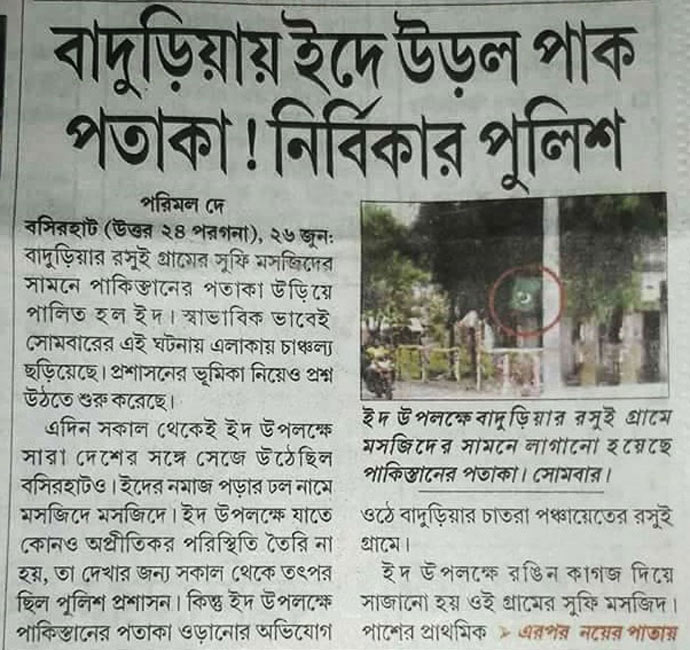 This fake news led to tensions and the locals alleged the involvement of BJP'S Ramprasad Biswas - a local leader in Bashirhat - as a conspirator. The aim was to paint the Bengali Muslims as pro-Pakistan and anti-India.

Bashirhat was already simmering due to this when the FB post - a morphed photo - by Souvik Sarkar triggered a protest that was dispersed by the police. Then, the locals allege, “outsiders” speaking in “Hindi” arrived and burnt down the police vehicles.

Within all this chaos, a viral rumour was spread that a mosque has been attacked and some kind of desecration has happened. This provoked the riots which were led by a section of the ultra-orthodox Bengali Muslims, while many other Muslims tried in vain to stem the mob anger.

So a fake news story and a morphed photo - spread via social media - provoked the ultra-orthodox section of the Bengali Muslims and led to the civil unrest.

Chief minister Mamata Banerjee responded to the situation by announcing the formation of “shanti vahinis” in every booth in Bengal where locals (the youth, religious leaders, social activists, etc) would ensure that no communal discord takes place provoked by hate speech, fake news and incendiary social media propaganda.

Creation of “shanti vahinis” is Banerjee’s second major move, after she had earlier announced that learning Bengali will be compulsory (up to class 10) in all schools of Bengal.

This led to the protests in Darjeeling about the “imposition” of Bengali language upon the Nepali-speaking people. But Banerjee clarified on June 6 that this rule won’t be applicable in Darjeeling and the students don’t have to take a compulsory examination elsewhere.

But why did the Bengal CM decide to announce such a proposal now? This is a direct response against the growing socio-cultural engineering mission of the RSS-BJP in Bengal. To counter the aggressive Hindi-Hindu-Hindustan-Hindutva plank, the Bengal CM hopes to unite the people with “Bengalism” – an assertion of the secular and liberal Bengali identity to counter the divisive communal politics of BJP.

So one of the ways she has decided to go about this is to keep alive and promote Bengali language in Bengal, and thereby promote Bengali literature and the broader consciousness of the literary giants, especially Tagore, who is viewed as “anti-Hindu” by the most rabid chunk of the Hindutva supporters.

Now, the “shanti vahinis” will be keeping a watch to avert communal discords which the Hindutva forces will try to execute in Bengal.

Soon after the Basirhat riots hit the news, Bengali Hindutva trolls began to spread false news in social media. A scene from a film - supposedly Bhojpuri - was spread as “Hindu woman getting violated in Baduria, Bashirhat”, while other trolls posted “dead bodies of Hindus have been recovered in Baduria”. 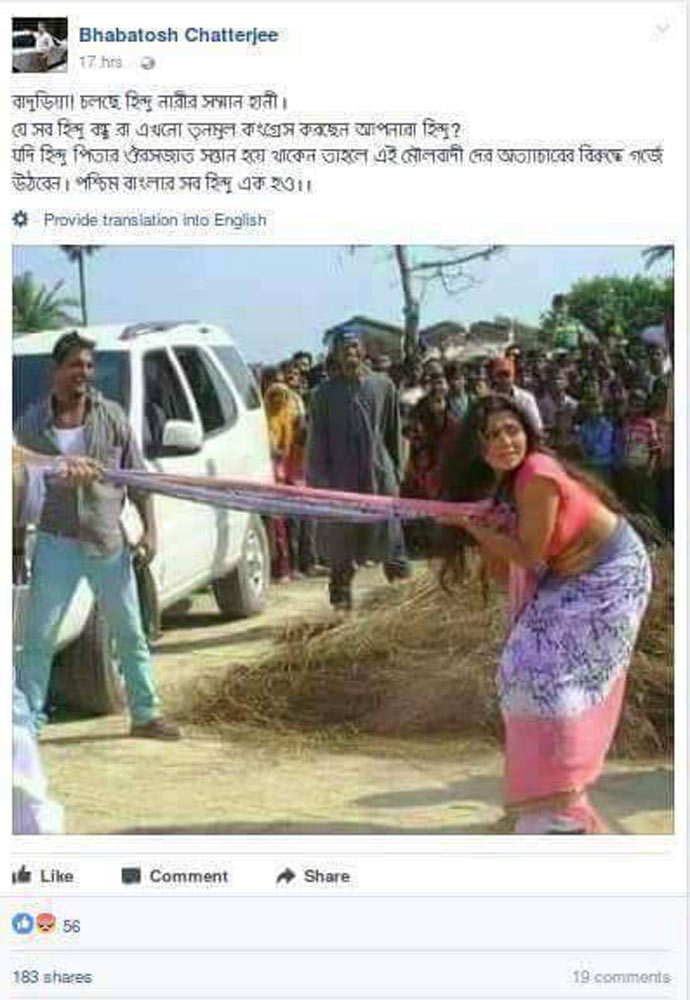 Scene from a film passed off as violence against Hindus in Bengal by BJP executive member, and shared widely on social media.

So all effort is being put to flame up the Basirhat fire, polarise Bengal on communal terms and consolidate on “Hindu” identity.

Bengal has never allowed the right-wing to flourish in her soil; and if BJP’s strategy to penetrate Bengal will be to stoke the communal fire, then this throws up a colossal political and societal confrontation.

So Bengal now has two challenges - to prevent the Hindutva designs of flaring up communal discord and to restrain the ultra-orthodox section of the Bengali Muslims, who are most prone to be instigated by Hindutva-engineered provocations.

These are the two giant elephants in the room - far right of the two religions which can make Bengal burn.

Both needs to be tackled, otherwise the TMC government will keep on getting attacked by Hindutva forces for its alleged policies of “Muslim appeasement”. And the Hindutva propaganda of “Hindus in danger” in the state will gather more steam.

Even the Left has started to attack both the BJP and TMC for “communal politics”. But it is the very vote share of the Left that is most susceptible to shift to the BJP.

CM Banerjee must address the criticism with an open and impartial mind.

Without the “victory” in Bengal, RSS-BJP’s unconstitutional dream of Hindu Rashtra cannot be realised. And to fight Hindutva, one needs to fight the far-right of Islam as well. No opportunity can be given to Wahhabism to take root in Bengal; this is of utmost importance.

Things will heat up as 2019 approaches. Bengal needs to wake up to the challenge; the hour of reckoning has truly arrived.