Rise of Bhim Army: Is western UP gearing up for another political churning?

Who will this movement wipe off and whose resurgence can it lead to, are all questions to be answered in due time.

Who is Chandrashekhar Azad and his Bhim Army, and why do they hold significance in the political checkerboard of Western Uttar Pradesh?

This is a difficult question to answer — for both political observers, and the politicians alike. He has been at the centre of the political stage since he and his Bhim Army protested against the Thakurs in Shabbirpur village of the Saharanpur district on the day of celebrations of Maharana Pratap Jayanti, in 2017. The Thakurs reportedly didn’t allow the Dalits in the village to celebrate Ravidas Jayanti. The war of words between the Thakurs and Dalits started, and resulted in violence allegedly unleashed by the Thakurs against the Dalits. The Bhim Army protested against this but it turned violent. Chandrashekhar Azad was arrested, and from there began a journey which holds the potential to change the politics of western Uttar Pradesh.

The incident and the release of Azad also exposed the political dilemma of the Bahujan Samaj Party (BSP). Mayawati has rarely spoken for his release, and had even called him a BJP/RSS stooge. Upon his release, he vowed to work towards defeating the BJP at all fronts in 2019.

There is no doubt that political observers have jumped on this incident and made Azad an accidental hero. But stories on the ground do corroborate his hold over the Dalit youths. The Bhim Army has consolidated its base in the entire state. In the last one year, Chandrashekhar’s name has reached every Dalit village of the state, and he achieved cult status in the community. Upon his release, Azad vowed to work towards defeating the BJP at all fronts in 2019. (Photo: ANI)

Going by the latest buzz, the Bhim Army is gearing for the 2019 elections, and as ironic as it may sound, Mayawati finds herself on the same side as Azad. In spite of his publicly saying that the Bhim army is ready to complement the BSP — while it takes its course of social transformation — Mayawati has been anything but accommodative. Recently, Mayawati sacked her party’s vice-president and national coordinator, Jai Prakash Singh. Following that, Singh joined the Bhim Army.

Azad’s closeness with Congress secretary Imran Masood and independent MLA from Gujarat, Jignesh Mevani — who is considered to be close to Rahul Gandhi — is also well known. If the Bhim Army decides to contest elections, it could easily wean away some Dalit votes, especially the Jatavs, the caste group to which both Azad and Mayawati belong. This is a sign of worry for Mayawati, who has been on the back foot since 2014, when a section of Dalit votes was poached by the BJP.

It is doubtful, that the BJP would be able to repeat that performance, and the section that had deserted the BSP is bound to return to it. But if Azad chooses to play in the same turf as the BSP, this section — largely comprised of Dalit youths and non-Jatavs — could shift towards him. No doubt then, Azad's increasing political aggression will be a cause of concern for the BSP.

Mayawati may sound dismissive of Azad’s rise, but he does signify a new phase of aggressive Dalit politics that is fast spreading from western UP to Haryana, Delhi and Rajasthan. 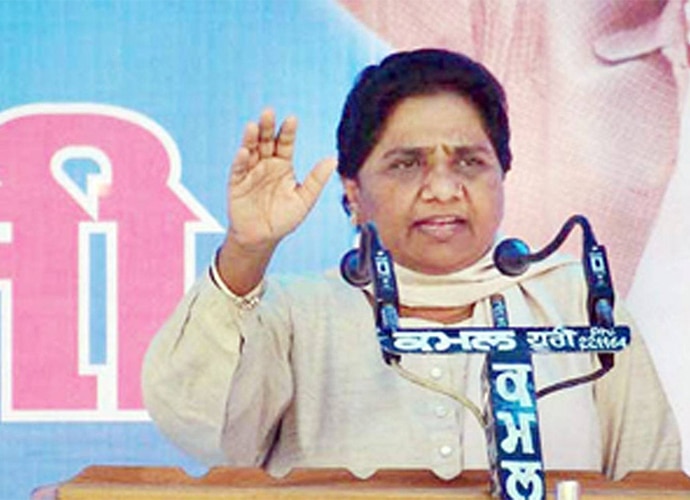 Mayawati has been dismissive of Azad’s rise. (Photo: Indiatoday.in)

And this is where the Congress comes into play. This political manoeuvring of Azad, a ground force to count on, and his constant appeals of Dalit-Muslim unity, can give the Congress an ace up its sleeve in the largely lost battlefield of UP.

It is an old saying in UP that bad news and politics travel fast, and what starts in the West doesn’t take much time to reach all corners.

In several districts of western UP, the Dalit-Muslim combine can be as high as 40 per cent. At first, this seems a substantial vote base to bank upon. Such a consolidation is something that Mayawati aimed for in 2017 elections when she fielded 100 Muslim candidates. But for the Muslims, Mayawati hasn’t been the easiest of choices.

This possible consolidation, even though localised mediums, could also spell trouble for the Samajwadi Party (SP), which hasn’t done well in western parts of the state, largely owing to an absence of dominant OBC castes to add to its Muslim votes.

Western UP has largely been a BJP-versus-BSP field, with Ajit Singh’s Rashtriya Lok Dal (RLD) playing an important role. In fact, only the RLD has been able to get its maths right with Muslim-Jat unity in the region. 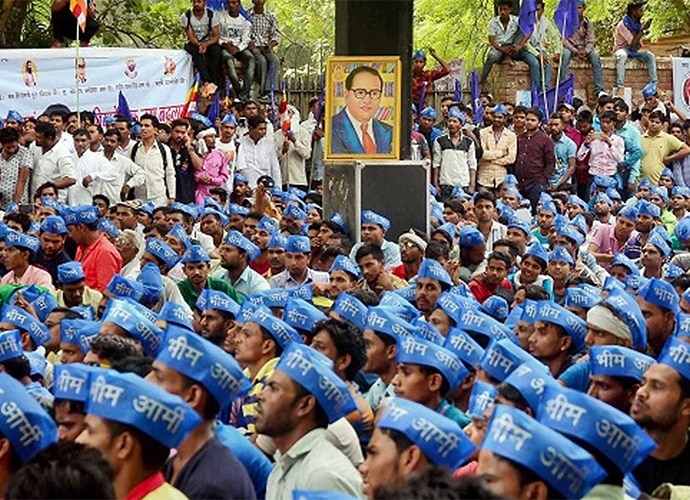 If the Bhim Army decides to contest elections, it could easily wean away a sizable chunk of Dalit votes. (Photo: Reuters)

With the Bhim Army’s entry and the radical approach towards politics it brings along, the traditional politics of the region is likely to be disrupted. Of course, it is too early to predict, even though this just might be music to BJP leaders’ ears. For the BJP, this may also help it win back upper caste voters, who have been annoyed with the party following amendments to the SC/ST Act.

For the Congress, the Bhim Army, might prove to be the elixir it had been looking for to gain foothold in UP. Given its history and a long-standing secular stance, the Congress is probably the only party that can bring this Dalit-Muslim unity to work. In the big picture, this will increase its bargaining power with the SP and the BSP in UP when it comes to seat-sharing in 2019 elections.

The Bhim Army has been assertive in its stand that it is not up for the 2019 polls or anything beyond. But then, even Mevani had said so in Gujarat. The Bhim Army revolution has been organic so far, grounded in its appeal, and sophisticated in its goals. After all, it all started as a network of schools for Dalits — Bhim Army Nishulk Paathshala or free school.

But with aggressive stands on social transformation it has taken, the Bhim Army, right now, stands out like the Black Panthers of the USA. It has its primary focus on basic sustenance, education and health. Politics for them, right now, takes a backseat. But the rise of the Bhim Army suggests that a big political churning is underway in western UP.

Who will this movement wipe off and whose resurgence can it lead to, are all questions to be answered in due time.

Post your comment
#Dalit-Muslim, #Mayawati, #Chandrashekhar Azad, #Bhim Army
The views and opinions expressed in this article are those of the authors and do not necessarily reflect the official policy or position of DailyO.in or the India Today Group. The writers are solely responsible for any claims arising out of the contents of this article.