The 'new Maoist' about town

After Bhima Koregaon, Maoism 2.0 has reportedly been discovered. But who are these 'new Maoists'? Who do they benefit? And who do they threaten?

Today there is a new Maoism, a new "Maoist" in town. 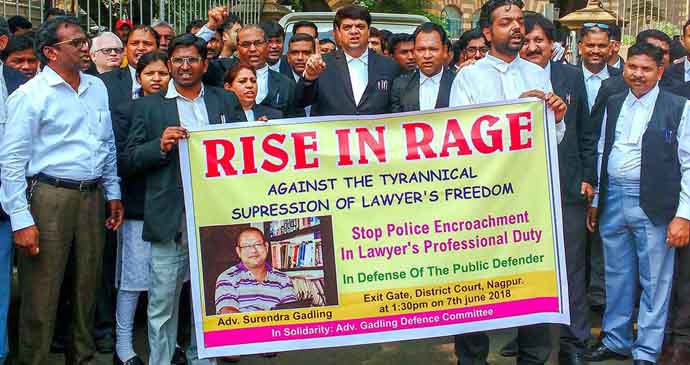 Advocate Surendra Gadling, along with five others, was arrested by Pune police for alleged links to the Bheema-Koregaon violence case. [Credit: PTI photo]

Like a new species, terrible and grotesque, as though borne out of eating plastic. With strange new organs and weird desires, new letter-writing skills and novel intentions. The hidden underground is now hypervisible, leaving its telltale signs everywhere. It works through the "link". The "Maoist link" is in abundant supply. Everyone, from the Congress to the Left to whoever is "anti-national", are mere shadows, mere cover for the hidden underground. Dalit radicals are very condescendingly reduced to being mere "conduits".

This is the "Maoist 2.0", a new species in town, a new product launched.

It leaves nothing untouched — except the core of the pure nationalist who now discovers yet another "plot" in town, eating up the Hindu nation (provisionally called India) from within. It stretches from Pulwama to Bastar.

The Nazis saw the Jewish-Bolshevik hidden plot destabilising the "great German nation". Here is a jihadi-Maoist plot to destabilise the nation.

Ah, but the Dalit angle is the spanner in the wheels.

Bhima Koregaon, with 200-year-old memories of Dalits rejecting the Peshwa's embryonic Hindu nation, prevents the ease with which the Maoists could be clubbed with the jihadis. With Dalits, there is no way the Pakistan angle can be brought into the picture: the "plot" loses steam. Just notice how Ramdas Athawale's comments on the entire episode have been sidelined, even though he is a Union minister in the present government. 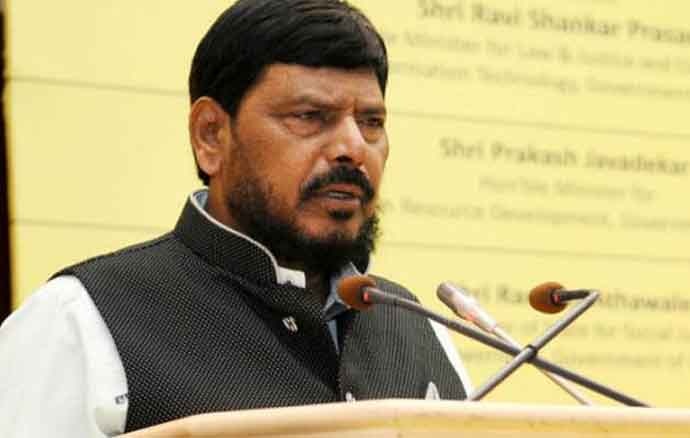 Perennial outcast? Union minister Ramdas Athawale has said 'it is not right to term Ambedkarite activists as Naxalites'.

What ecosystem is producing this Maoist 2.0?

Since quite some time now, the "conscience of the nation" has ruled over us, degrading the sanctity of the so-called "rule of law". This conscience no longer needed the law, particularly when it would consummate itself in the wee hours of the dawn, when a life would be secretly snuffed out. The "deep state", with shady-shadowy intelligence agencies fighting the ghost of a Hemant Karkare, upheld this conscience, inscribing it perforce on society. They worked in utter sync, pre-2014.

Soon it turned out that this conscience is nothing but what the trolls say and want.

The deep state is like a mafioso with a mandate from the 'masses' who are today nothing but trolls, the new "janta janardhan". If you are not following the trolls, then you are not connected to the conscience of the nation. Then you are elitist, you are dictatorial, you are dynastic, you are "foreign". Prime Minister Modi understands this very well. He embodies this truth.

Trolls and the deep state, IT cells and the ATS — they work in perfect harmony, be it under the Congress or the BJP government.

Journalism judges the conscience and mood of the nation from trolls. Those TV anchors must go out of their way to be this conscience. They must act as the arm of the deep state, an extension of the police and the official mouthpiece of the Army. The police "doing its work" is synonymous with the law — the courts of law being just an irritant. Police are bouncers of the Hindu nation. "Evidence" is what the police says evidence is.

If the police shoots, as in Tuticorin, then the protestors (now branded as "left-liberals" or "JNU-Pak agents") must have deserved it — no, not even "must have", but "surely deserved" it, were "asking for it".

In fact, they always deserve it.

They need not do anything to deserve it. By just existing, by just breathing and walking and living, they are already guilty. No case is required against them. They must be eliminated. Since they would anyways do something heinous against the nation, it would obviously be foolish to wait till they act and destroy our nation! So, the Muslim man who spent 14 years in jail, only to be later acquitted by the court as innocent, cannot make us feel bad for having being unjust towards him — for we were only acting to prevent disaster! Prevention is better than cure — ain't it? Recall here the nightmarish perfect world in The Minority Report (2002) where murderers would be caught before they could kill, and the innocent would never live in fear.

We must, as the highest ethical act, in fact, duty to the nation, foist a case on "them". The "fake letter" must be truthfully produced. If one exists in reality, fine; if it does not, then it must be produced. From 'R' to 'M', 'M' to 'R', or 'Q' to 'P', we need a letter, fake or otherwise. It might be technically fake, but it will be really and truly fake only to the traitors, whose heart does not beat for the nation!

Finally, in the run-up to 2019, the "deep state plus troll plus godi media" is going to be hitched onto Amit Shah’s electoral machine — that is why there is so much effort to put those like Jignesh Mevani and the Bhim Army in the dock. Particularly after the nation-wide Dalit uprising on April 2, 2018, followed by the Kairana by-election results, a Dalit-Muslim alliance looks more likely than ever. This alliance is the Hindu fundamentalist's worse nightmare.

The BJP will be facing its own "Minority Report".

Also read: Why the Unlawful Activities (Prevention) Act should have no place in democratic India

Post your comment
#Urban maoists, #Maoist letter, #Bhima Koregaon violence, #Plot to kill pm
The views and opinions expressed in this article are those of the authors and do not necessarily reflect the official policy or position of DailyO.in or the India Today Group. The writers are solely responsible for any claims arising out of the contents of this article.