'Bhobishyoter Bhoot': Liberal hypocrisy is West Bengal’s living ghost from the past

In her thick Bengali accent, this pocket dynamo packs a punch that puts her political rivals in place and keeps us, headline hunters, in perennial glee.

She orders Shah Rukh Khan to sit in the backseat of her Santro and wears hawai chappals for the Ambani daughter’s wedding. Her party may have been accused of Saradha, Narada and everything else that makes the 'mati' below the 'ma' and 'manush' shake, but the lady herself maintains a rather spartan lifestyle, even after becoming the most powerful person in the state of Bengal.

However, one unmistakable quality minuses the many pluses Didi has.

West Bengal’s chief minister is a liberal hypocrite. Like many in her state — who quote Marx but shop from Marks and Spencer — Mamata doesn’t walk the talk in her hawai chappals. So, while us, the 'limousine liberals' (I don’t own one yet), hailed her from outside Bengal when she laid out a red carpet for Padmaavat — a film that glorified meat eaters and almost got banned for very different reasons, upholding freedom of expression (the right thing to do), in her own state, Didi has got a film that criticises her government pulled off from cinema halls (definitely the wrong thing to do).

Bhobishyoter Bhoot (Ghost of the Future) is a sequel to Bhooter Bhabishyat (2012), a successful film on a bunch of ghosts that try to stop a haunted house from being turned into a shopping mall. Whether that 'haunted house' is an allegory to the state of Bengal is anybody’s guess — but the new film reportedly takes a more direct dig at Didi’s demons.

It also didn’t help matters that Anik Dutta, the director, is a vocal critic of the Bengal chief minister and had asked why so many cutouts of Mamata Banerjee were kept in a film festival that was meant to celebrate motion pictures.

Be that as it may, Bhobishyoter Bhoot has been pulled out of cinema halls in a city that celebrates liberal values, freedom of expression included. 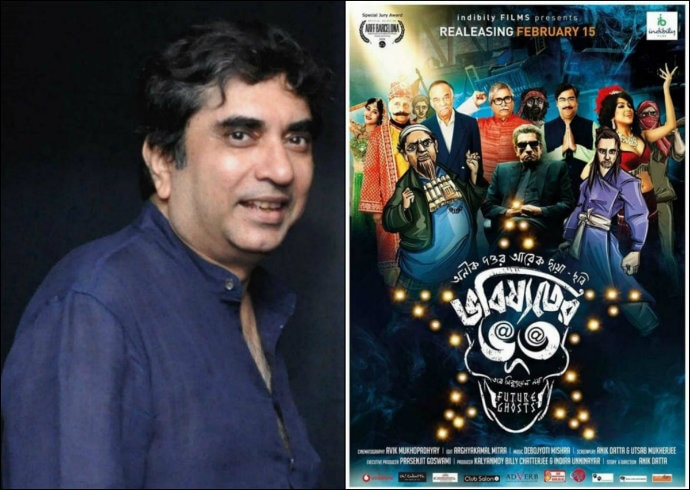 Director Anik Dutta is a vocal critic of the Bengal chief minister. Even then, the ban on his film comes as a surprise. Source: Twitter)

Like it or not, Banerjee is Bengal’s face for the rest of India. With Bhobishyoter Bhoot unofficially banned, it is now the face of liberal hypocrisy. A long-standing tradition, if you ask me, among a people who pride themselves for reading good books, watching good films and standing up for good things — and then behaving like the rest of India.

Mamata Banerjee has inherited this fine tradition from the Left Front government before her.

In November 2007, she was hounded out of Kolkata when fringe Muslim groups bayed for her blood. Instead of protecting a writer who had already been hounded out of her own country, Bangladesh, standing up for her freedom of expression, the fine gents of the CPM syphoned her out of Bengal, where she had taken refuge.

It would be a very long list if one were to write down the liberal hypocrisies of the Left, but the killings of thousands of Hindu refugees upon a tiny island of the Sunderbans in 1979 must surely be at the top. To this bunch of homeless refugees, who had crossed the border and come to India to escape genocide, the Left had promised a permanent home in Bengal. It was in the Opposition then. When it came to power, they forgot their promise.

Without government help, these refugees made their home in an uninhabited island called Marichjhanpi.

That hurt the Left’s ego enough to reportedly have these people shot at, maimed, raped, killed by the police. And the press gagged to stop the world from knowing.

This fine tradition in Bengal — of saying one thing and doing another — has served the political dispensation well. It has also infected the talk-circuit liberals who come out of the state and write serious columns in Delhi newspapers criticising the Right for not upholding freedom of expression and many other fine values.

Meanwhile, the haunted house of Bengal is left at the mercy of the bhobishyoter bhoot.