Why BHU VC Girish Tripathi, RSS man with links to Modi, is being blamed for crackdown

Hundreds of young women were allegedly beaten up after being dragged out of their hostels at night by police officials, who were called by the vice-chancellor.

It may sound incredible. But the controversial Banaras Hindu University (BHU) vice-chancellor (VC) Girish Chandra Tripathi got the prestigious job at the prominent varsity largely because of his close connections with the man who was Prime Minister Narendra Modi's proposer for the 2014 Lok Sabha nomination. Tripathi was the manager of a college run by retired high court judge Justice Girdhar Malviya, who had signed Modi's nomination papers as proposer. Prior to that, he had been a professor at the Economics department of Allahabad University.

However, on account of his deep roots in the Rashtriya Swayamsevak Sangh (RSS), Tripathi managed to get the top job at one of India's leading institutions of higher learning. Interestingly, Justice Malviya (retired) was also on the search committee for the appointment of BHU VC when Tripathi's name was shortlisted.

Officials, students and several members of the BHU staff pointedly hold Tripathi responsible for the barbaric treatment meted out to young women students on the university campus last week when they were staging a protest against an alleged case of sexual assault, in pursuance of their long-pending demand for women's safety on campus. 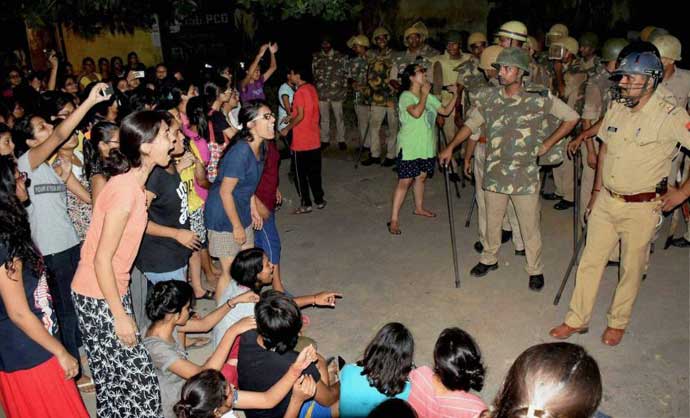 BHU VC Girish Tripathi: 'It is not an incident of molestation, it is one of eve-teasing.' Photo: PTI

Hundreds of young women were allegedly beaten up after being dragged out of their hostels at night by police officials who were called by Tripathi. From his public utterances, it is evident that Tripathi has a regressive mindset and believes girls and boys cannot be seen as equals. His moral diktats for young women include a ban on western clothing, non-vegetarian food and discriminatory hostel curfew timings.

It is common knowledge that the sprawling 2,700-acre campus has turned most vulnerable for the 10,000-odd young women students at BHU. Poorly-lit streets, absence of CCTV cameras and a grossly ineffective internal security system have made it convenient for anti-social elements to indulge in crimes as grave as molestation after sunset.

What has made it worse is such elements have been getting away with murder - owing to the apathetic attitude of the university administration. Students allege that a proctor at the varsity went to the extent of reprimanding a group of young women students who complained against molestation and other kinds of sexual harassment: "Why are you making so much noise? You have not been raped; thank God it is only molestation."

Such outrageous and insensitive remarks did not provoke the VC, who too has conveniently joined the victim-shaming and blaming exercise. Tripathi merely reiterated: "The curfew for boys in 10pm while that for girls is 6pm and 8pm, depending on the hostel."

In an interview to a national daily, Tripathi shifted the blame on left-wing student organisations. He sought to accuse bodies like SFI and AISA for inciting trouble on the campus.

He went on to allege "these groups were responsible for creating trouble not only in BHU, but also most university campuses of the country".

Most unabashedly, the VC did not even hesitate to give a clean chit to the molesters by playing down the young women's complaint: "It was not an incident of molestation; it was eve-teasing."

He then tried to give the protest an altogether different spin by linking it to PM Modi's Varanasi visit. Most students and staff feel that the VC was attempting to impress upon the prime minister how passionately concerned he was about him.

With his tenure coming to an end in November, Tripathi is desperately trying to win a second term on which the Union HRD ministry will take the final call.

It is evident to those on campus, including senior officials, that the VC has committed one goof-up after the other. "The situation could have been controlled if the VC had taken the trouble of driving down to the university gate where women students were staging the sit-in demonstration. He could have assured them of stern steps against those responsible for molestation and eve-teasing on the campus and also given a patient hearing to the long standing demands of students to ensure better security for the young women. After all, that was the only demand of the agitating students," a senior state government official told me.

Describing Tripathi as a man with a "bloated ego", another official said: "There is only a handful of students who indulge in anti-social acts, so if the VC was determined, it would not be difficult to identify and punish them."

While the concerns related to the VC's flip-flops can be resolved only with the Union government's intervention, the state government led by Yogi Adityanath is equally accountable.

The spate of molestation and other sexual harassment incidents in Varanasi, which happens to be the prime minister's Lok Sabha constituency, belie the existence of the "anti-Romeo" squads that the UP chief minister claimed he had set up to address women's safety soon after assuming power in March 2017.

Why are the anti-Romeo squads not visible in Varanasi, where the danger is real and and at its worst?

#Banaras Hindu University, #BHU, #Girish Chandra Tripathi
The views and opinions expressed in this article are those of the authors and do not necessarily reflect the official policy or position of DailyO.in or the India Today Group. The writers are solely responsible for any claims arising out of the contents of this article.