Tejashwi Yadav-led Mahagathbandhan is likely to corner 139-161 seats in the 243 Bihar assembly.

The National Democratic Alliance (NDA) is likely to lose the Bihar elections hands down to Tejashwi Yadav-led Mahagathbandhan, according to the India Today-Axis My India exit poll. The grand alliance is likely to corner 139-161 seats in the 243 Bihar assembly. This will mean Rashtriya Janata Dal (RJD) leader Tejashwi Yadav ekes out Janata Dal (United) leader Nitish Kumar as the next Bihar Chief Minister.

Breaking the predictions region wise, the Mahagathbandhan could win 23 out of 31 seats in the Kosi region. The NDA, on the other hand, is likely to win the rest of the eight.

Ofthe 18 seats in the Champaran region, Mahagathbandhan is likely to bag 10 seats, while NDA could bag eight seats. Nitish Kumar could be on his way out. (Photo: PTI)

In the 49 seats of the Bhojpur area, the Mahagathbandhan could win 33 out of 49 seats. The NDA is predicted to win 9 seats, while LJP is likely to get one seat.

In Mithilanchal, the Mahagathbandhan is likely to win 36 seats of the 60 seats, while the NDA is expected to 23 seats. The LJP could win one.

In the Urban Pataliputra-Magadh region, the India Today-Axis My India exit poll predicts 33 seats for the MGB, 26 seats for the NDA and the LJP is likely to win one seat out of the 61 seats in the region.

RJD leader Tejashwi Yadav who single-handedly set the agenda for elections, compelling all parties and leaders to talk about development and unemployment, could well have set his political fortunes soaring if the exit polls hold.

Forty-four respondents in the India Today-Axis My India exit poll said they prefer Tejashwi Yadav to be the next chief minister of Bihar, while 35 per cent said they would like to give Nitish Kumar another chance. 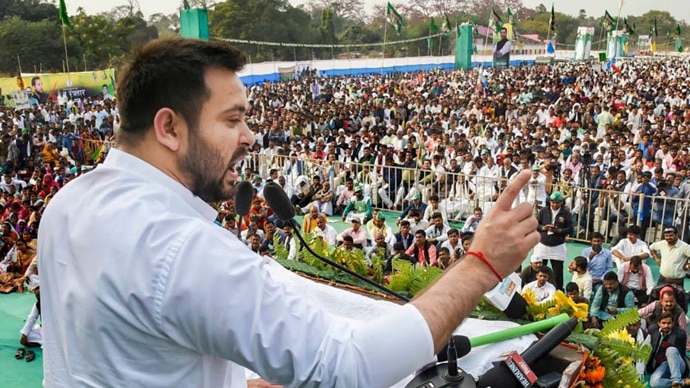 Tejashwi Yadav could well be the next Bihar Chief Minister. (Photo: PTI)

The ABP CVoter says NDA will get 104-128 seats, while it pegs the figure around 108-131 for Mahagathbandhan, one for the LJP and six will go to others.

The Times Now C-Voter polls predict 112 for the NDA, 122 for the Mahagathbandhan, five for others and four seats for the LJP.

But it’s not all bad news for the BJP because India Today-Axis My India exit poll predicts the party would do well in the bypolls in Madhya Pradesh, Gujarat and Uttar Pradesh.

Bypolls were held in 54 assembly constituencies across 10 states. In Madhya Pradesh, 28 seats were at stake. Polls predict the Shivraj Singh Chouhan government will thrive, with the BJP likely to bag 16-18 seats. The Congress would have to settle for about 10-12 if the poll results hold.

Of the seven seats that went to polls in Uttar Pradesh, the BJP could bag five to six seats. The Samajwadi Party, on the other hand, could win 1-2 seats, while the Bahujan Samaj Party could bag 0-1 assembly seats.

In Prime Minister Narendra Modi’s home state, polls were held on eight seats. The BJP is likely to win six-seven of these assembly seats. The Congress could get 0 to one seats.

Also read: Why Nitish Kumar would fight neither pandemic, nor polls

#Tejashwi Yadav, #India Today-Axis My India exit polls, #Exit poll results, #Biharelections2020
The views and opinions expressed in this article are those of the authors and do not necessarily reflect the official policy or position of DailyO.in or the India Today Group. The writers are solely responsible for any claims arising out of the contents of this article.