The rise, fall and revival of Lalu Prasad Yadav

NDA has managed to take the state out of the shambles after the Lalu Raj, but Nitish Kumar's somersault revived the fortunes of RJD in 2015, and now NDA is up against a rejuvenated RJD.

Many of the disciples of Jayaprakash Narayan went on to become chief ministers, cabinet ministers, prime ministers and have left their footprints on Indian politics. With Bihar elections underway, it wouldn’t be an exaggeration to say that the power struggle of Bihar is fought by the shishyas of the same guru — JP. The former CM of Bihar, Lalu Prasad Yadav, entered politics as a student leader from Patna University and was elected as the youngest member of the Lok Sabha in 1977 at the age of 29. Janta Party succumbed to the internal rivalry between Socialists and Jan Sanghis within three years of assuming office. Lalu joined a splinter group, Janta Party-S, formed by Raj Narain, only to lose the next election. He went on to win the Bihar Legislative Assembly election in 1980, and again in 1985 to become the leader of opposition in Bihar assembly. In 1989, he was elected for Lok Sabha, and by 1990, he was largely on his own, out of the shadow of any political mentor. Very soon, he positioned himself as the leader of the downtrodden and poor.

In the 1990 Bihar Legislative Assembly elections, Janata Dal became the single largest party by winning 122 seats out of 325. Lalu sought to form the government with the outside support of BJP and the Communists. He managed to get the support of his own party MLAs bypassing Ramsundar Das who was supported by the then PM VP Singh. Yadav won narrowly with 59 MLAs on his side, compared to 56 MLAs on Das’s side. This narrow victory changed Bihar and national politics once and for all. At that time, the Mandal Commission report had caused a political earthquake and Lalu threw his weight behind the Mandal report. 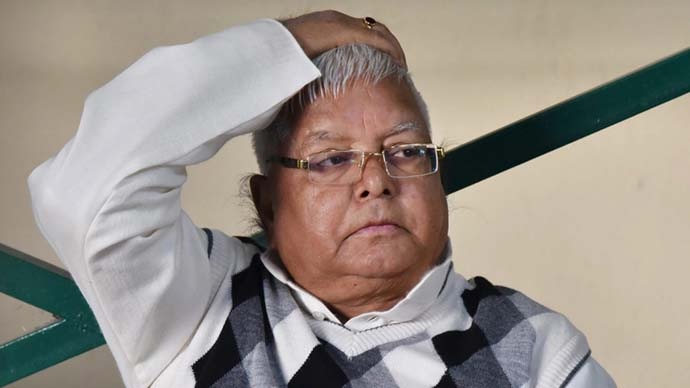 Lalu had the almost full support of the 16 per cent Yadav voters in Bihar who had a perception that he patronised them. Add to this the 17 per cent Muslim voters of Bihar, and it becomes a formidable MY — the Muslim-Yadav — equation. Muslims had been Congress voters till then. But the way Bhagalpur riots of 1989 were handled by Congress, it left many Bihari Muslims disenchanted with the grand old party. The Justice NN Singh Commission also blamed Congress for having an “inbuilt communal bias”.

Lalu appeased Muslim voters through his gimmicks like handling permanent appointment letters to the Urdu teachers at a huge public gathering at Gandhi Maidan in Patna. Through his opportunist manoeuvrings, Lalu managed to capture the space that was available when Congress was losing the trust of the Muslim voters. LK Advani’s famed Rath Yatra from Somnath to Ayodhya was halted at Samastipur in Bihar when Lalu Yadav was the CM.

Interestingly, RK Singh, the Additional Magistrate who arrested Advani on Lalu’s order, went on to become BJP MP from Aara in 2014 and is currently a Minister of State in the Modi government. It is for a reason that John Lennon said, “It's weird not to be weird.” The demolition of Babri Masjid in 1992 resulted in several upheavals, one of them being the further disillusionment of Muslim voters with the Congress. PM Narasimha Rao of the Congress was perceived as someone who allowed the mosque to be demolished. “If anyone of the Gandhi family members was the Prime Minister, the Babri Mosque would be standing,” was Rahul Gandhi’s infamous remark in 2009, confirming the rumours over Rao’s role in the demolition.

Lalu was gradually and systematically filling this void among Muslim voters.

1990 Bihar assembly election resulted in a decisive victory for Lalu’s Janta Dal, which won 173 of the 325 seats and got a majority on its own. Lalu went on to become the CM, and even won the next assembly elections in 1995. This was unprecedented in Bihar politics. Since 1961, no CM in Bihar was able to complete his full term of five years. Lalu gave the much-needed political stability to Bihar since Sri Krishna Sinha relinquished office after remaining CM for 14 years. But it came at some opportunity cost. Lalu displayed his visible hatred for the upper castes with his “Bhura baal saaf karo” remark — BhuRa referring to the Bhumihars and the Rajputs, and BaaL referring to the Brahmins and the Lalas. The consolidation of Muslims, Yadavs and a huge chunk of OBC-SC votes made Lalu a mass leader. A significant number of Rajputs also favoured Lalu, which is seen as an attempt made by the community to remain in the good books of the ruling party. Add to this his personal charisma, the rustic Bihari who could generate humour from anything and everything, and there was no one who could stand up to him.

The fodder scam was primarily responsible for Lalu’s plight and when Governor AR Kidwai gave permission to the CBI to prosecute Lalu, there was no escape. Lalu went to jail riding on a rickshaw and unabashedly announced that even Lord Krishna was born in jail. Post this, Lalu had to quit as the CM of Bihar. He gave the CM post to his wife, which was quite surprising as there were second-rung leaders in his party who could have served as the CM.

Rabri Devi allegedly was controlled by her brothers — Sadhu Yadav and Subhash Yadav. This was the era when law and order reached its nadir. Kidnapping, extortions and killings were regular, and in fact, kind of institutionalised. One of the surveys had shown that from 1992 to 2004, there were a total of 32,085 reported cases of kidnapping in the state. When Lalu's daughter was getting married, Sadhu Yadav allegedly took away more than 100 Maruti cars from the Mithila Motors showroom in Patna. Expensive jewellery was allegedly picked up from Alankar Jewellers, and the Yadavs refused to pay the bill. Businessmen had no option other than to shut their shops. Kids, and even adults, were supposed to be at home post 7 pm, as roaming on roads could be fatal. There were regular power cuts as electricity was a luxury and people had no choice.

Last month, when action crime thriller Mirzapur 2 was released, there was a palpable euphoria. But having witnessed the havoc firsthand as a child in Bihar, I remained unfazed by the web series. While returning from school, our rickshaw frequently used to change the routes because gunshots could be heard or bombs would have exploded on the regular route. The likes of Mohd Shahabuddin, Daddan Yadav, Reetal Yadav, Bindi Yadav, Surajbhan Singh could give any Kaleen Bhaiya a run for his money.

Lalu came out of jail but made no attempts for any course correction whatsoever. However, he still remained a darling of the Lutyens' media which saw secularism personified in him and as someone who could effectively halt the march of BJP in India. North Bihar was often under flood, and Lalu as the Railways Minister in 2004, remarked that the floodwaters are good as it gives people so much fish to eat. Media giggled and cheered on his audacity. Will Nitish be able to get a lease of life by piggybacking on Modi? (Photo: PTI)

The people of Bihar were now slowly getting disillusioned with Lalu, especially the upper castes. A significant chunk of non-Yadav OBCs was also rallying against Lalu. Nitish Kumar emerged with the help of BJP. In the 1999 Lok Sabha elections, the NDA alliance won 40 out of the 55 seats in Bihar. Lalu was defeated from Madehpura, which is a Yadav bastion. NDA’s Sharad Yadav, who defeated him, was on a dharna in front of Patna High Court as he feared vote-rigging by RJD. He ended his dharna only after his victory was announced.

The stature of Nitish Kumar’s JDU was rising and BJP chose to play second fiddle to him in Bihar. NDA halted Lalu’s juggernauts in Bihar. After the 2010 Assembly polls, RJD couldn’t even get the leader of opposition post in the Bihar assembly as it could not win even a tenth of seats in the elections. RJD was humbled to a mere 22 out of the 243 Assembly seats.

After decimating his arch rival’s party (RJD) in the 2010 Assembly poll, Nitish Kumar became ambitious and that made him severe ties with his old ally BJP in 2013 after the party opted for Narendra Modi as its PM candidate for 2014 Lok Sabha Polls. However, things went haywire for Nitish after he decided to go solo in 2014 elections, which reduced his party to just two Lok Sabha seats from 20 seats in 2009.

After the results, Nitish Kumar in a dramatic sequence of events stepped down as CM and handed over his crown to Jitan Ram Manjhi. Nitish was also sending feelers to RJD. Lalu being the seasoned politician that he is, pounced on this opportunity and extended support to Nitish when CM Manjhi led a coup against Kumar's de facto leadership.

Post Manjhi's departure, Nitish once again took over as the Bihar CM with the support of RJD and Congress. Lalu could sense that the new camaraderie between him and Nitish could well revive his party's fortunes, and so he accepted Nitish as CM. The Nitish-Lalu chemistry nullified the salvos taken by the PM Modi, who spearheaded NDA's attacks against the Grand Alliance — the Mahagathbandhan. When the results were declared, Mahagathbandhan emerged victorious with a two-thirds majority, the BJP-led NDA suffered a humiliating defeat. However, BJP's vote share remarkably rose to 35 per cent. Lalu's RJD secured 80 of the total 101 seats contested and became the single largest party, while Nitish’s JDU won 71 of the 101 seats contested.

Lalu, who was written off by the political pundits, made a massive comeback. The lantern was shining bright. Though Nitish was the face of the RJD-JDU Mahagathbandhan alliance, it was Lalu who was more assertive. Nitish’s JDU was down to 71 from their 2010 tally of 115 seats, while Lalu’s RJD was at 80 from their 2010 tally of 22. It was a gain of a whopping 58 seats for the RJD. After this electoral turnaround, Lalu didn't make any fuss in helping Nitish's coronation as CM but got his two politically naïve sons — Tejashwi and Tej Pratap — accommodated in Nitish's cabinet as ministers. Lalu knew the alliance won't last long, so he used this opportunity to politically groom his sons. When Nitish stepped out of Mahagathbandhan in 2017 to join NDA again on the issue of corruption, Lalu ensured that Tejashwi became the face of the party, and he was appointed as leader of opposition in the Assembly.

NDA has managed to take the state out of the shambles after the Lalu Raj, but Nitish’s somersault revived the fortunes of RJD in 2015, and now NDA is up against a rejuvenated RJD. PM Modi is trying to pull weight against the anti-incumbency. His adroitness has often pulled out allies from tough electoral situations. Will Nitish be able to get a lease of life by piggybacking on Modi, or will the young guns of RJD — the Tejpratap-Tejasvi pair — be able to pull it off this time? The answer, my friend, is blowing in the winds of Bihar.

Also Read: What the anatomy of Bihar election reveals about political muscle in the state

#Mahagathbandan break-up, #Nitish Kumar, #Lalu Prasad Yadav, #Biharelections2020
The views and opinions expressed in this article are those of the authors and do not necessarily reflect the official policy or position of DailyO.in or the India Today Group. The writers are solely responsible for any claims arising out of the contents of this article.