The silence of all major political parties speaks volumes for the ruling class consensus on not identifying or punishing the perpetrators of the killings.

It was on August 16, 2015 that Cobrapost.com announced that they had captured "on-camera the confessions of perpetrators of six major massacres of poor, unarmed Dalits in central Bihar, revealing how the Ranveer Sena militia planned and conducted these indiscriminate killings with impunity and how they twisted the long arm of the law, who trained them, who armed them, who financed them and who lent them political support".

In a remarkable sting operation, the journalist, posing as a filmmaker working on a film on Ranveer Sena, had managed to obtain videographed admissions by important Sena functionaries of their direct role in the massacres - though the courts had acquitted all the five interviewees who had faced trial. They also talked of the backing and concrete aid in sophisticated arms, finance and help to escape that they received from high level politicians of the likes of former prime minister Chandrasekhar and former finance minister Yashwant Sinha. The high court judge, who had been appointed to inquire into some of these massacres, was also interviewed and he named the RSS and spoke of the role of high level BJP functionaries like Murli Manohar Joshi, Sushil Kumar Modi, CP Thakur and others. It is now well over three weeks since these videos have entered the public domain. All the parties in Bihar have been in election campaign mode, with a flurry of public meetings featuring central leaders of all political parties. Amidst the din and noise of the campaign, the silence around these disclosures is absolutely deafening. Not one major leader has made even the smallest reference to the blatant, even arrogant, admissions by the killers; or even pointed a finger at the high profile politicians named in the sting.

At the press conference for the release of the videos, Cobrapost was accused of timing the release to help RJD and Lalu Prasad Yadav in the coming Bihar elections by targeting the BJP and RSS. But neither Lalu nor Nitish Kumar, nor even Sonia Gandhi have shown any inclination to use the revelations. The reason is obviously because none of the major parties are shown in a favourable light in the exposure - while the BJP and RSS were much more directly involved, Nitish's  JD(U) ensured that the Justice Amir Das Commission, which was to name the politicians involved, was dissolved without warning, so that it could not submit a report that would expose his alliance partner, the BJP. The RJD and Congress too have not done anything effective to either prevent the massacres or punish the culprits and are today in an alliance with the JD(U).

The silence also brings on display the consensus among the ruling classes and dominant castes vis-à-vis the Ranveer Sena, which received a much wider political backing than similar such groupings. Earlier private landlord armies set up to suppress the Dalits and other oppressed poor peasant sections and their Naxal leadership normally based themselves almost exclusively on a single caste, using the caste affiliation to mobilise even the poorer sections of the caste as foot soldiers. Thus the Kuer Sena comprised of Rajputs, the Bhumi Sena was of Kurmis, the Lorik Sena of Yadavs and the Bramharshi Sena of Bhumihars. There were only some groupings like the Sunlight Sena set up by Pathans and Rajputs that involved more than one community. These private feudal armies disintegrated by the late eighties and early nineties in the face of determined Naxal-led resistance.

The Ranveer Sena however, though begun by and led by the Bhumihars, managed to gain much wider support from all landlord sections. Politically too, though most closely aligned with the BJP, they got the support of the other ruling parties too. They were also much more ruthless and violent than their predecessors. They set up a more organised leadership structure. They gave the impression of a much more class-conscious force representative of landlord interests. These factors managed to gain them much more durable support of the feudal sections who are out to somehow suppress the struggles of landless labourers and poor peasants. This also explains why, none of the political parties campaigning the Bihar elections would risk raising the Cobrapost issue and disaffecting these feudal sections. This ruling class consensus is also reflected in the "justice" provided by the criminal justice system. Things were weighed in Ranveer Sena's favour from the very beginning. The Inquiry Commission Chairman told Cobrapost how Murli Manohar Joshi threatened investigating officers to go soft on the investigation or they would be put in place when the BJP came to power. Soft investigations obviously led to acquittal of most massacre accused at the trial stage itself. Those who were convicted by the sessions judges were let go by the high court. Another Cobrapost interviewee - a relative of the victims - related how Bhumihar judges in the Patna High Court released all Ranveer Sena members convicted by lower courts. Thus, almost all Ranveer Sena members who faced trial have been acquitted by either the trial court or the high court.

On the other hand, any retaliatory action by the oppressed has experienced the heavy hand of the law. In one case, four are on death row with their mercy petitions pending since the last 13 years, whereas two have had their death sentence commuted to imprisonment for the rest of their natural life. In another case eight were given the death sentence, which was later commuted to life. The scales of justice seem grossly tilted in the Ranveer Sena's favour.

Small wonder then that the Dalits and most exploited classes look to the Maoists for justice and protection from the Ranveer Sena. The earlier Maoist Communist Centre (MCC) had, in the 1980s adopted the method of mass retaliation, which even took the form of massacre similar to that perpetrated by the upper caste senas. There was, however, a review and change in tactics. After the formation of the CPI (Maoist) in 2004, these tactics took the form of selective attacks on ringleaders while sparing the rank and file. Thus when the Maoists organised the mass jail-break in Jehanabad in November 2005, they killed two of the Ranveer Sena inmates, who were leaders known for their cruelty, while allowing 30 to 40 other Ranveer Sena accused to escape. The assassination of Brahmeshwar Singh, the Ranveer Sena Mukhiya, in 2012 within two months of his release too seems to be part of the same tactics. 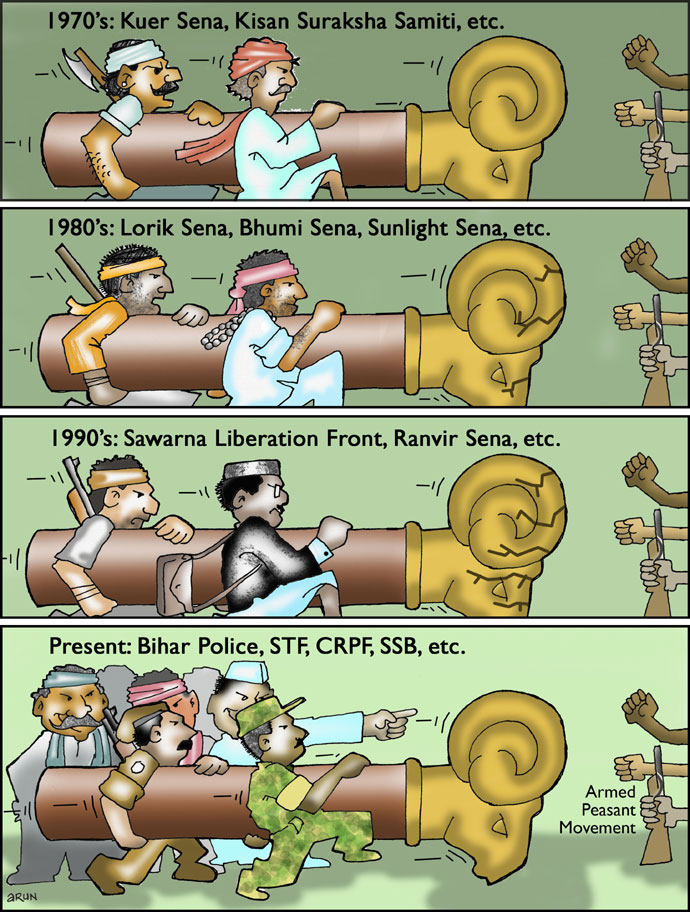 These tactics seem to have yielded some results for the Maoists. The Ranvir Sena is today a spent force and there does not seem any other private sena coming up which is willing to take its place. This does not however mean that that the movement of Bihar's poor for their legitimate rights does not face any opposition. The task of protecting and advancing the interests of the feudal forces, earlier performed by the private landlord armies, is now being directly undertaken by the state forces. Central forces like the Sashastra Seema Bal (SSB) and CRPF have been moved in along with the Special Task Force (STF) of the Bihar Police. It remains to be seen whether they will be able to do what the private armies were unable to do.

#Maoists, #Dalits, #Bihar Elections, #Ranveer Sena
The views and opinions expressed in this article are those of the authors and do not necessarily reflect the official policy or position of DailyO.in or the India Today Group. The writers are solely responsible for any claims arising out of the contents of this article.