From Chanakya to C-Voter: What exit polls do not predict about Bihar

The much-awaited Bihar exit polls were released on November 5 and like most pre-poll predictions, there was no unanimity amongst pollsters on "Who will win Bihar?" Four out of six polls show that the Nitish-led mahagathbandhan will form the government, while two polls forecast a BJP-led NDA win. The wide ranges of the predictions have left observers confused.

If we take the lower and higher end of the ranges for both alliances across six polls, we get a number that makes no sense. The NDA is expected to draw 93-155 seats, while the MGB is set to get 83-132, according to the exit polls. While Today's Chanakya predicts an outright victory for NDA with 155 seats, the India Today-Cicero one says NDA will emerge as the largest alliance with 120 seats. C-Voter and News Nation, on the other hand, give a simple majority (122 seats) to MGB, while AC Nielsen and CNX give them 130 and 132 respectively. An average of the polls (poll of polls) shows a marginally-hung Assembly with MGB slated to emerge as the largest alliance with 118 seats and NDA just behind at 117 seats.

Exit polls have historically fared better than pre-election polls and, by and large, been succesful at providing direction (accurately predict winner) most of the time, though they may err on seats. However, this time, the polls have failed to predict a consensus.

What we can make of the exit polls

As we have been stressing all along, the polls are very close to call. Each seat has its unique dynamics. The fact that, in 2010, Janata Dal United JD(U) defeated RJD and Congress candidates in the majority of the seats it won (80 out of 115) - coupled with the fact that the three parties are fighting together this time - has confused the voters, changed the caste dynamics and also led to many rebel candidates. The seamless transfer of votes across alliance partners may also not happen in practice and has complicated matters. 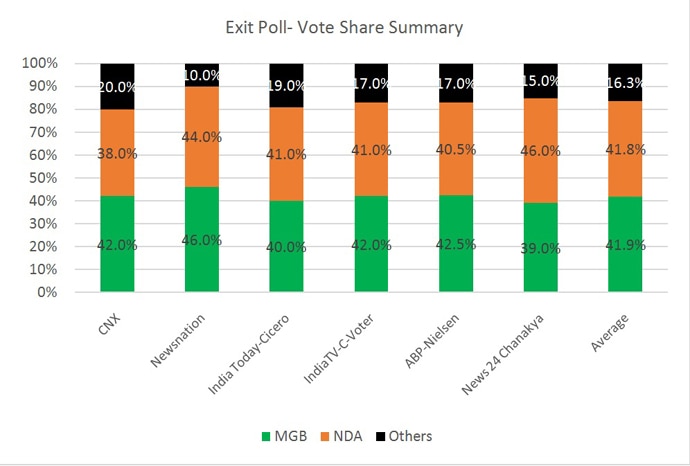 Today's Chanakya had accurately predicted the Bihar Lok Sabha results in 2014. This has raised NDA followers' hopes. A note of caution though that they erred in predicting the number of seats that the NDA would get in Maharashtra (122 versus 151) and Jharkhand (41 versus 62). A three pe cent negative swing in vote share can lead to a reduction of 25 to 30 seats from this tally of 155 and make it very close.

Chanakya has projected 46 per cent vote share for NDA in the Bihar Assembly elections. That's a massive 6.5 per cent jump from the 39.4 per cent that the NDA got in the 2014 Lok Sabha polls. How has this been achieved? Compared to the Lok Sabha constituencies, the upper caste, lower OBCs, Yadavs and Kurmi vote share has reduced, while the Kushwaha/Dalit vote share has increased as per Chanakya poll, vis-à-vis the figures of the CSDS post poll result of 2014. However, they got their numbers right in 2014 Lok Sabha! So there might be some piece of puzzle that we are missing (essentially, the caste-wise population break-up on which there is no unanimity).

The game is on and we will be forced to be glued to our seats till Sunday afternoon. In the event that one of the exit polls is correct, we have presented two scenarios that Bihar may see on November 8:

A. Why Nitish-led mahagatbandhan will win

1. Leadership ratings are still significantly ahead of the combination of all NDA chief minister aspirants

2. On an average, MGB appears to have gained share over the pre-poll survey (excluding Chanakya), which means that they may have stalled the NDA momentum after the voting started. Excluding Chanakya, MGB would be ahead of the NDA by a 0.75 per cent vote share. The MGB have more strong seats (93) than the NDA (42), and this can give them an edge.

3. The MGB have done well amongst SC voters with nearly one-third of the votes (according to the C-Voter and Chanakya average), not the sweep that most expected, given that both Manjhi and Paswan are with the NDA. This may not yield as many additional seats as originally anticipated by the NDA.

4. Both Chanakya and C-Voter have predicted that 66 per cent of the upper caste votes would be drawn by the NDA (about 17 per cent by the MGB). This implies that the upper caste votes have gone to the NDA's rebel candidates or other independents, damaging the NDA in many of their weak constituencies (51 of them)5. The likely poor performance of RLSP, with NDA winning only about 53 per cent (average of C-Voter and Chanakya) of Kushwaha votes. This can have a negative impact on key seats.

B. Why NDA will win

1. Nitish's leadership ratings are still significantly ahead of the combination of all NDA chief minister aspirants, but his tie-up with Lalu is impacting him negatively.

2. Both Chanakya and C-Voter predict that only 70 per cent of the Yadav votes will go to MGB (about 17-20 per cent would be drawn by the NDA). This implies Lalu has not been able to significantly increase the vote share from his community, as widely predicted. Also, it means that Yadav voters may not be voting for JDU candidates (Kurmis and Yadavs have a history).

In the 2014 Lok Sabha polls, 82 per cent Yadavs voted for RJD (64 per cent) and JDU (18 per cent) fighting separately. NDA is seen holding onto its Yadav vote share of 18 per cent in Lok Sabha.

3. MGB failed to polarise Muslims, with 84 per cent voting for it as per Chanakya and C-Voter. This is one per cent lower than their vote share during the LS polls. While fighting separately, the two had garnered 85 per cent votes. The BJP garnering eight to nine per cent vote share is a good performance, considering the charged atmosphere. Others like AIMIM, NCP and Muslim candidates of the Third Front seem to have dented MGB's prized vote bank, by drawing six to seven per cent of the votes. 4. Koeris' (Upendra Kushwaha's community) vote bank is seen as backing RLSP. 60 per cent of the community backed RJD and JDU in Lok Sabha polls, which has now fallen to 41 per cent levels as per Chanakya and C Voter.

5. MGB failed to consolidate the Kurmi votes. Only 60 per cent seem to have voted for MGB despite Nitish leading popularity charts and being the preferred CM candidate. 15-28 per cent are seen voting for NDA as per Chanakya and C-Voter.

#Exit Polls, #Bihar polls
The views and opinions expressed in this article are those of the authors and do not necessarily reflect the official policy or position of DailyO.in or the India Today Group. The writers are solely responsible for any claims arising out of the contents of this article.