The party bides its time before establishing total control of the state, while riding on the back of its allies.

Coincidences are common in politics, but it is incredibly telling in BJP's case when it comes to forging new political alliances. In a recent interview to India Today TV, Janata Dal-Secular leader HD Kumaraswamy conceded he had made a mistake by allying with BJP 12 years ago. With polling for 2018 Karnataka Assembly elections barely five days away, the BJP is trying to finish off Kumaraswamy's party, JDS, which is also fighting a battle for existence in the state.

Oddly enough, on the same day Shiv Sena, which has decided to fight the Lok Sabha and Maharashtra Assembly elections alone, announced its candidate for the upcoming Lok Sabha by-election from the Palghar seat.

The seat was vacated due to the untimely demise of BJP MP Chintaman Vanaga. The candidate Shiv Sena chose is none other than Vanga's son, clearly implying that the Palghar by-election will prove to be a testing ground for general elections in 2019.

Both these cases raise questions over why BJP's present and former allies are wary of partnering with it. A few past cases may throw up some answers. Politics in Goa was dominated for decades by the Maharashtrawadi Gomantak Party (MGP), which had a strong base among the poor and marginalised Hindus.

MGP ruled the state and remained the dominant factor for decades until in 1994 the party entered an electoral alliance with the BJP to consolidate the majority Hindu votes in its favour. Even though the alliance was not able to topple the Congress government - MGP won 12 and BJP only 4 seats - the election proved to be the beginning of increase in BJP's influence in the state. Over the next six years, the positions of the BJP and MGP saw a reversal. BJP ate into MGP's voter base and saw an increase in its cadre support. BJP soon became the bigger partner in the alliance. Cut to 2018, MGP has been reduced to three seats in the 40-member Assembly.

The MGP broke its alliance with the BJP in 2018 Assembly elections but as a compromise supported the Manohar Parrikar-led government as part of a post-poll truck.

Whether Biju Patnaik enjoyed power or occupied the Opposition benches in the state, he always remained a dominant personality in the state. Be it his stint with the Congress or association with the Janata Party and Janata Dal, he maintained a track record of always aligning with secular forces. But things changed after Naveen Patnaik took over his legacy to form Biju Janata Dal (BJD) in 1997.

BJD was among the secular constituents of the National Democratic Alliance (NDA) along with George Fernandes' and Nitish Kumar's Samta Party. Naveen Patnaik's incorruptible and "clean" image and Biju Patnaik's legacy proved beneficial for both the BJD and BJP but more so for the BJP as it helped the party establish its roots in Odisha. A look at the statistics of Assembly elections proves how BJP's strength grew in the state. Finally in 2009, fed up with the bickering over seat-sharing, Naveen Patnaik decided to break the alliance and go solo which gave him better results and independence.

Even though he retained his position in the state in 2009 and 2014, the BJP by then had managed to spread its cadres across the state. The BJP managed to mark its hold in the state due to the 10-year-long alliance with BJD that started in 1997.

The BJP celebrated its performance in the state panchayat elections as its victory against the Naveen Patnaik government. In the 2019 election for Odisha Assembly, BJP will be the lone challenger to Patnaik as Congress' strength has diminished over the years.

Gujarat BJP's Hindutva laboratory has spread its reach and influence after being set up in 1990s. The party enjoys huge influence and support across the state but there was a time when the party had little influence over politics of Gujarat.

Having a strong leadership within the state right from Sardar Patel to Morarji Desai, Gujarat remained loyal to the Congress or break away Congress groups. Even during the time of Jana Sangh - unlike Delhi, Uttar Pradesh or Madhya Pradesh - BJP was not even a dominant Opposition force in the state.

Riding on the anti-Rajiv Gandhi wave in 1989 allying with Janata Dal, which was under the leadership of political stalwart Chimanbhai Patel, BJP jumped to 67 seats. The Chimanbhai Patel government was short-lived owing to the split in Janata Dal. BJP quickly ate into the space created by Janata Dal and became the main Opposition party to the coalition government of the split-away group of Chimanbhai Patel and Congress. It came to power decisively in 1995. The influence of Chimanbhai, who later joined the Congress, gradually faded away from politics.

In Maharashtra, the BJP was known as the party of Shethji-Bhatji (Bania and Brahmin). It had its pockets but its strength and sphere of influence were limited to 10-odd seats in 288-seat Assembly.

Party leader Pramod Mahajan was tasked with finding a partner for the party after breaking away from Janata Party. He finally sealed an "ideological" deal with Shiv Sena, calling Hindutva the common thread between the two parties. To begin with, the party completely surrendered to Shiv Sena chief Bal Thackeray and his diktats.

But the BJP kept working towards increasing its influence in the Marathwada and Vidarbha region. The BJP started challenging Shiv Sena's dominance in local body elections but realised that it still hadn't reached the level to take on Shiv Sena on its own.

For 25 years, BJP endured the pain of humiliation at the hands of Shiv Sena leaders but waited patiently for the right opportunity to turn the tables. The opportunity came in 2014. Equipped with cadre support across the state due to an alliance with the Shiv Sena and riding on the Narendra Modi wave, BJP gathered courage to break away from Shiv Sena and managed to win 124 seats in the Assembly, whereas Shiv Sena managed only 63.

Shiv Sena now understands that the situation has changed completely. BJP not only firmly controls the rural base of Hindu voters but has also made inroads in the educated middle class "Marathi" votes in Mumbai.

There is no doubt that Uddhav Thackeray's only dream for 2019 is to see BJP lose the Lok Sabha elections.

The four examples cited above clearly show how BJP bides its time before taking the big leap in states to establish total control riding on the back of its allies.

Whether an ally is part of its ideological spectrum or not has never mattered for the BJP.

The party's strategy is clear: Once in alliance, spread across the state, firm up party's cadre in the areas which were earlier out of its reach and then start marching towards occupying power. 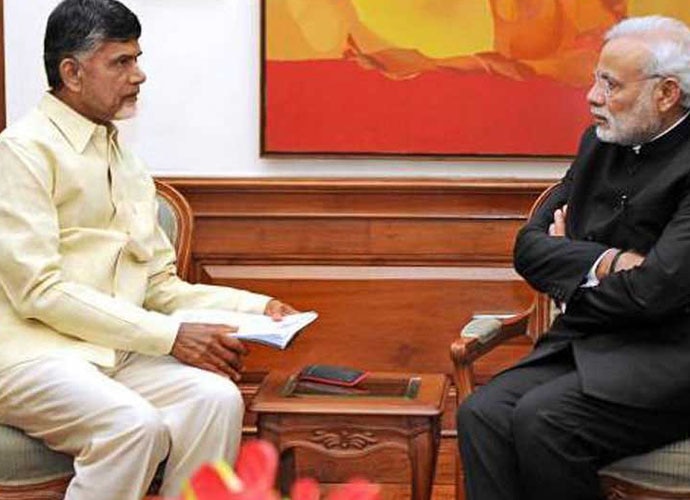 One has to agree that the party leaders work hard and remain loyal to the leadership.

In a state like Gujarat, it didn't take more than four years for the BJP to change the political arithmetic, but in Maharashtra it took 25 years. In Odisha, the BJP is still trying and believes that it will come to power in the next couple of years on its own.

In Uttar Pradesh, the BJP leadership risked its image by forging an alliance with the Mayawati-led Bahujan Samaj Party - not once but twice - with an aim to widen its base among the marginalised communities in post-Mandal India.

The risk has paid off and the party now enjoys a comfortable majority in the state. The NDA officially has 46 partners across India, including Nitish Kumar. Kumar is likely to pay for the mistake in 2019 Lok Sabha elections when the two parties sit down for seat-sharing talks.

It won't be long before some of the new allies also get a taste of what Uddhav Thackeray or Chandrababu Naidu have been complaining about.

Also read: Namaz disruptions to tomb being converted into temple in Delhi NCR — bigotry is hitting too close to home

Post your comment
#Naveen Patnaik, #BJP-ruled states, #BJP-Shiv Sena, #NDA
The views and opinions expressed in this article are those of the authors and do not necessarily reflect the official policy or position of DailyO.in or the India Today Group. The writers are solely responsible for any claims arising out of the contents of this article.