I work for AAP: This is what tracking BJP on Twitter revealed to me

Does it mean Modi's online support base is depleting, and they have now gone into damage control mode?

As a member of the Aam Aadmi Party (AAP), and as someone who has led its social media team for three elections, I have had to monitor BJP's social media strategy closely.

In the past few months though, I have been more involved with working on some long-term projects for the party. I am also working on a book on Indian social media, besides running my consultancy business.

Yet, I find always time to be on Twitter. I think tweeting is my forte and I can't deny that I don't enjoy it.

More recently, I have noticed that the BJP has changed its social media strategy. Some of their old and committed supporters on Twitter also seem to have gone silent.

In fact, whenever they start tweeting against Aam Aadmi Party or Arvind Kejriwal, I find multiple users are mostly using the same content. Some news portals have also pointed this out. 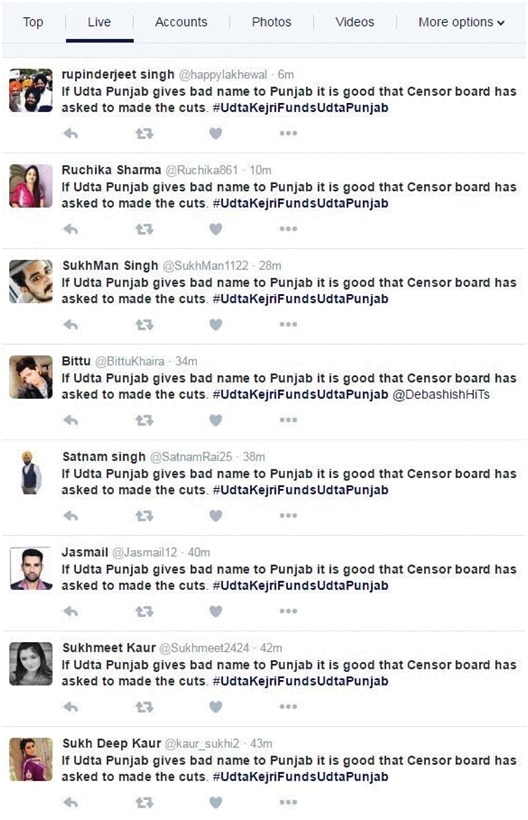 A few evenings ago, my partner-in-crime, Charanjeet, and I were sitting and chatting after a long day at work. While Charan was playing with one of our data analytics tools, our respected Prime Minister Narendra Modi was visiting Qatar, and #ModiInQatar was the number one trend in India on Twitter.

When he keyed #ModiInQatar into our tool, he found something peculiar at play. It’s a bit technical, but I’ll try my best to elucidate.

Do note: All the data used in this article is freely available in the public domain, and open to scrutiny.

While going through the list of "Most active users" for #ModiInQatar, a few accounts that popped up were of escort services!

We decided we should look at the "heatmap" to find where these tweets were originating from, but didn’t find much.

Yes, there were quite a few tweets from the UAE.

It intrigued us enough and we decided to look up other hashtags that were trending. The first one was #UdtaKejriFundsUdtaPunjab.

When I looked at the list of most active Twitter users, there was a striking similarity among many followers, apart from the fact that they were tweeting the same content.

All of them had few followers, some as few as four, with only a handful of them following 158 people, and had 1.2K related tweets.

In a nutshell, we figured, someone, or some organisation, had created around 150 users. They had got them to randomly follow few other users and posted 1.2k tweets in all. 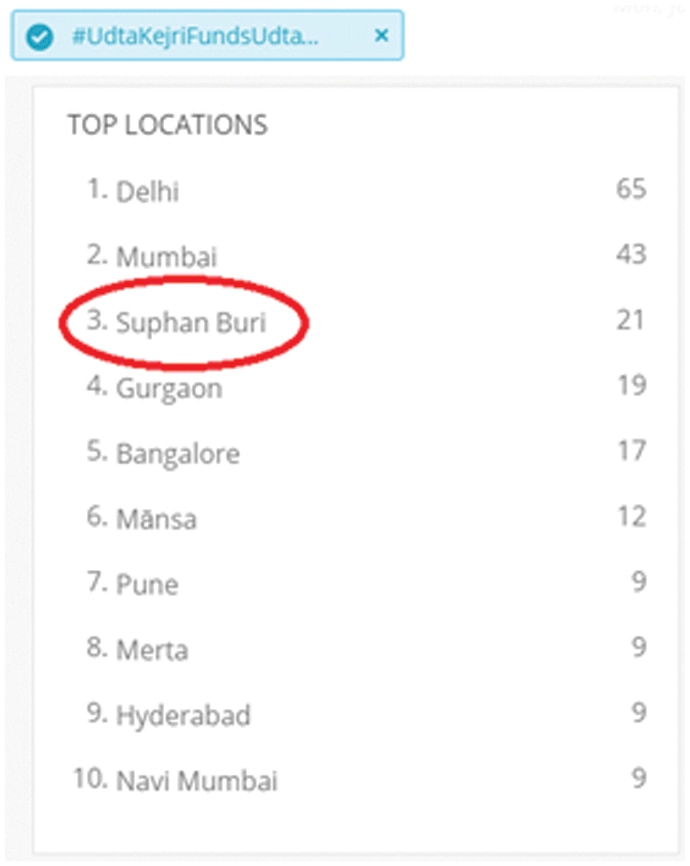 Interestingly, many of these users had Punjabi/Sikh names. Because AAP is strongly contesting Punjab elections, and giving the Akali-BJP combine nightmares, I figured, someone was trying to build the "perception" that the people of Punjab are tweeting against Arvind Kejriwal and AAP.

When I looked at the heatmap now, I found that many of the tweets were coming from Thailand out of all the places.

What were so many "bhakts" doing on the beaches of Thailand?

I looked more closely at the location and found the users were tweeting from Suhan Buri, a state in central Thailand, which ranks third in the top locations.

At this point, Modiji was in the middle of touring Afghanistan, Qatar, Switzerland, USA and Mexico. I decided to track the hashtags around each of the visits to try and figure out what was going on.

When he was wrapping up his Switzerland visit, I began to analyse the hashtag #ModiInSwitzerland.

Here I found the top users were old BJP followers. I know some of them because they have been consistently abusing me now for the past few years. They have a decent following, but here again, the heatmap pointed to Thailand as a hotspot for the tweets. This time, however, the location pointed to a new place, Phra Nakhon Si Ayutthaya, another state from central Thailand, that ranks fourth in the top locations. I had never heard of this place earlier and had to do a Google search to find out if it was even a place.

Then Modiji reached the US. First I looked at the hashtag, #ModiInUS. It did have some tweets from Thailand, but not a substantial number. Then I decided to look at the hashtag #ModiInUSA.

Here again "Suphan Buri" was featured, but down at rank 10. This is no surprise as the US visit was already being talked about and didn’t need a push. In the last leg of the visit, Modiji visited Mexico. 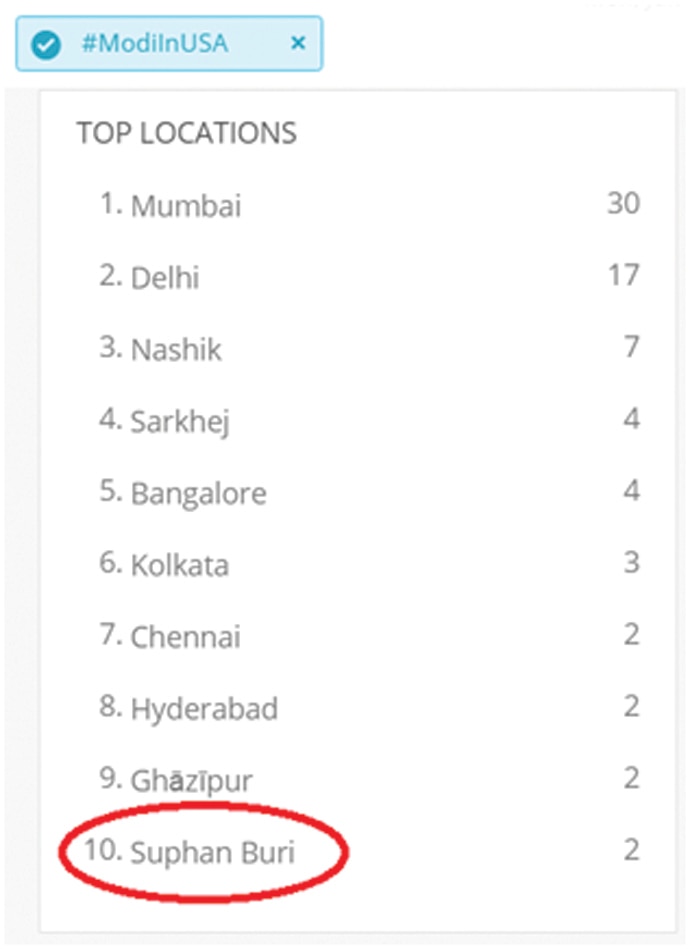 This day the hashtag #ModiInMexico was trending, and after the visit was culminated, I analysed the data. Again, Thailand was featured prominently on the heatmap.

Suphan Buri, the same nondescript state in central Thailand, was again at the fourth spot in the list of top locations tweeting about the issue.

For me, the question was, are the Thais really interested in PM Modi or is there an Indian population there, which loves Modi only too much? A bit of research suggested that neither of the two is true.

The most talked about issue in this duration in Thailand on Twitter was the surgery of their ageing king and neither of the two states has a sizeable Indian population.

So what is it?

I began to wait till the BJP trended a seemingly neutral hashtag with no global interest. Soon, #TransformingIndia began to trend.

Well, how do I know that the BJP trended it? Well because no less than the prime minister used this hashtag for his account.

I switched on my analytics.

The heatmap again showed Thailand was a prominent location for most of the tweets that were emerging.

This one is far more interesting than the other hashtags I had analysed before. Here, the prime minister's official account @PMOIndia, as well as his ministerial colleagues Smriti Irani, Rajnath Singh and Manohar Parrikar were tweeting too. 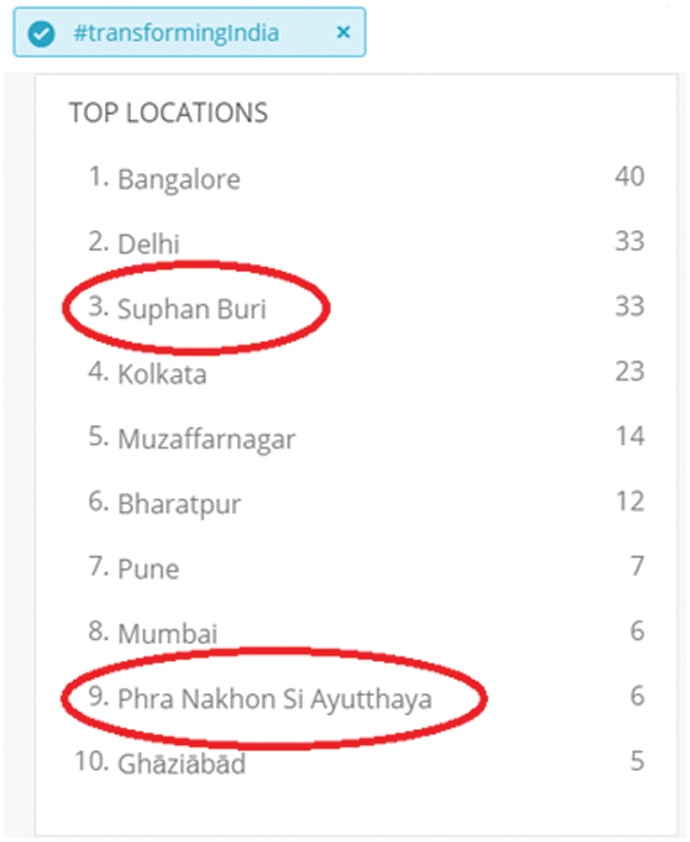 I tried to explore the locations from where these tweets were happening. As expected, "Suphan Buri" was among the top locations, proudly placed at number 3. "Phra Nakhon Si Ayutthaya" was at number 9.

So, what does all this mean? Can’t there be actual supporters who might be tweeting for Modiji and BJP?

Well, quite possibly, there would be a few, but the volume that makes these places show up regularly on the list of top locations is not that easy to gather with a few sporadic followers.

There are only two possible explanations:

a) The easier explanation: BJP leaders or some of their supporters are using VPN (Virtual Private Network) to hide their location and identity. Hiding behind this wall, they are creating fake handles on a regular basis and helping the BJP hashtags. This explains the usage of the same content from multiple handles, as in the case of #UdtaKejriFundsUdtaPunjab. This also means that their actual supporters have gone silent.

b) The darker explanation: BJP has hired some marketing agency in Thailand to do their dirty work. This includes creating fake users, abusing leaders of other parties and creating a negative perception against leaders like Arvind Kejriwal.

If the latter is the case, then the situation is much more alarming and it means that BJP has recognised that its support base online is depleting, and they have now gone into damage control mode.

One thing which is amply clear is that BJP has some explaining to do. I urge IT minister Ravishankar Prasad to look into this. May be he could shed some light on whether this too is part of the #DigitalIndia initiative?

#UdtaKejriFundsUdtaPunjab, #AAP, #Modi government
The views and opinions expressed in this article are those of the authors and do not necessarily reflect the official policy or position of DailyO.in or the India Today Group. The writers are solely responsible for any claims arising out of the contents of this article.