The poison is not in the momo but BJP's food politics

These days in India, something carcinogenic and poisonous is floating in the air.

So what is the most carcinogenic stuff being dished out as street food in India, in the contemporary era whereby our future "national animal", the holy cow, is still seen all over stuffing plastic, glass, chips, medicine, gutka wrappers, a miscellaneous assortment of garbage and waste, even bones, rotten flesh, polythene, among a variety of non-biodegradables, in its divine digestive tract?

Well, it is that steamed and fried object, round, creamy-white and innocuous, now so popular as street food in India: momos. With that spicy red chutney which opens up all the pores of your thought process and lines your intestines with that tangy membrane of ephemeral fulfilment, if not health or nourishment.

And pray, it is the momo. It is not even an octopus, or oyster, not hybridised meat, not even a damned aphrodisiac!

Indeed, among other obsessions stalking the octopus-like, self-righteous vigilantes of the current regime, the latest is the innocent momo. A BJP leader in Jammu has started an anti-momo campaign, certainly, for better things to do.

He is reportedly not only terribly wary of "Burmese and Bangladeshi" people selling it (do you see a tinge of racism inherent in this phenomena?), he is even afraid that the Chinese might overtake our traditional food habits, as they have done in most FMCGs all over the world, especially in India during the famous Hindu festivals.

He has allegedly declared, as in a Shakespearean metaphor: "Momo is a killer and we cannot allow a killer to grow in a civilised society.” (Truly, instead of Macbeth or Othello, Vishal Bhardawaj’s next movie project can be safely predicted: it will be called – The Momo!) 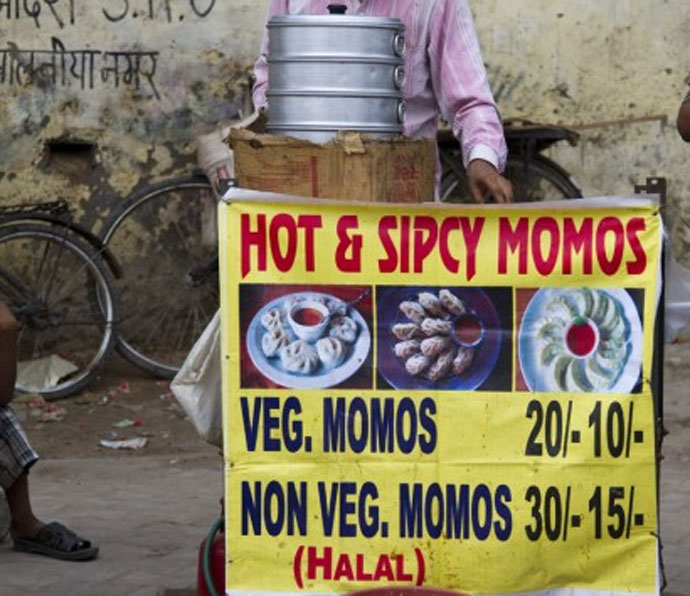 The steamed and fried object, round, creamy-white and innocuous, now so popular as street food in India: momos.

Relentless as they are, a top RSS leader, hitherto always controversial and shadowy, Indresh Kumar, made another cosmic revelation during an Iftar party in Delhi’s Jamia Millia Islamia University, while facing students’ protests. In an RSS show, he made a truly, original and remarkable prophecy: “Meat is a disease… Milk is the cure.”

He also reportedly implied that meat is basically poison, and, whosoever is consuming meat, is, thereby, consuming poison. Clearly, the neo-prophets of the RSS-BJP are not only hell-bent on turning Indian mythology, food and cuisine, the university system and media ethics, and the history of the freedom movement and nationalism upside down, they are out to ravage all that science has discovered in nature and outside.

Surely, at the top of the food cycle, if the tiger, for instance, refuses to eat momos, he surely can’t eat meat as well. Meat is poison. The tiger should only drink cow milk. Surely, for the tiger, it is a difficult ethical choice: to be, or not to be.

Among the obsessive fads of hardline vegetarianism, currently very popular in certain western countries, even cow milk or cow products are banned. Vegans don’t even touch a dish which has a remote semblance of any cow product; they are much more stringent and strict than those who eat cake without eggs. All cow products are thereby subjected to the same principled treatment by these vegans — as a non-vegetarian product. That is, metaphorically, all cow products are poison — because, it is "cruelty against animals".

This "scientific" logic can be stretched to its limitless possibilities. You can’t touch, wear or carry leather, can’t wear or touch woollen clothes, can’t touch or consume anything laced with any semblance of animal product, real or imaginary. This is worse than poison.

Why not, just chill and do it; once a vegan, always a vegan!

Mohandas Gandhi, like many others, propagated vegetarianism — even Buddha did that, despite the story that he ate whatever was given to him as bhiksha.

However, their message was through persuasion, consensus and awareness, and with the full force of argument, decency and rationality. They did not usurp or degrade the established or inherited food culture of local civilisations, as diverse and complex as in India. This food culture is compelled by the everyday logic of an infinite and relentless terrain of mass poverty and organised starvation, more so, driven by the sharply unequal and brutal caste society.

How do you, for instance, define the food habits derived from the compulsions of famine, drought, natural catastrophe, malnutrition, poverty, gender discrimination?

People eat roots, leaves, flowers, branches, shoots, seeds, sea fish, river fish, different kinds of meat, including bird meat, vegetables, fruits, objects grown in the wild; now, should they follow the diktat of this or that regime which wants to impose its own homogeneity of a warped Hindutva?

So, should Dalits, adivasis, Muslims, Christians, neo-Buddhists, and various communities with their specific food cultures, derived from inherited or historical circumstances, stop eating what they have been eating, and enjoying?

And what about those societies, which consume this or that beef, in a country where millions are veggie? Indeed, scientific logic too is determined by social and historical reasons. It reflects its own truth. If the RSS-BJP want to believe that Ganesha’s head was the early invention of indigenous surgery, or missiles and nuclear warheads, if not jet fighters, were the shooting stars in the sky in Superpower Vedic India, they are free do so.

To each his own mumbo jumbo in a free society, as long as you don’t force it down other people’s throats. Or, make it a compulsory subject in our primary textbooks.

However, the elements of food are certainly derived, from hunger, as much as from culinary enjoyment and social circumstances. A majority of people in developing countries like India, can’t even afford a two square meals, least of all nourishing food.

In a society where malnourishment is rampant, where almost half of our children are emaciated, where mothers are so typically weak, overworked and unhealthy, and girls are treated with organised discrimination even in terms of distribution of daily food, and where medical cure is still scarce and scattered, food becomes an empirical indicator of the quality of life.

Like health, housing, education, drinking water, sanitation. So check out: where does India stand in the human development index?

They can call it poison, but, for many, that is the way to survive a daily life. They should see, how in freezing winter nights, the poorest of the poor, hard working daily wagers, workers, coolies, rickshaw-pullers, eat the buff bone marrow curry with rotis. It gives them energy and strength, and helps them survive, and work. As a simple, thin curry of rice and fish in the morning does for an ordinary Bengali who goes out to work.

In a country where the public distribution system has all but collapsed, where the average purchasing power of the vast majority is so abysmally low, and where political parties buy off people with Rs 2 a kilo rice, or a promised pressure cooker, etc, food, hunger and malnutrition work in a jarring synthesis, with no chance of a democratic catharsis.

Indeed, if large parts of India, stalked with poverty, hunger and malnourishment, had chosen to eat beef (buff) and pork, which is cheap, it could have become a qualitatively different nation-state.

Much more healthier, less poor, and less stalked with hunger.

However, that too is personal or community choice — vegetarianism is as much a right, as is being a non-veggie.

Momos can be your carcinogenic substance; it can be salvation for my starving stomach. And meat can be your poison, but those who love their poison, let them be.

For instance, if the RSS leader would have his way, the next Durga Puja pandals in India (and Bengal?) will not serve either "kosha mangsho" (dry mutton) or "kosha murgi" (dry chicken) along with an assortment of meat and fish chops and cutlets right inside the holy premises where the goddess is installed — because this food is poison?

Well, not even "Ma Durga" will agree to that.