PM Modi needs to realise that the Indian electoral system is too complex and intriguing to be conquered by personal charisma alone.

Being labelled as ‘party in retreat’ by the political analysts post 2004 and 2009 Lok Sabha debacle, currently the BJP rules 12 states on its own, six states and one UT as ruling alliance partner; not to forget the back-to-back Lok Sabha majority it got in 2014, and then in 2019. As a matter of fact, Narendra Modi became the only non-Congress PM to return with a better mandate (from 282 in 2014 to 303 in 2019). Many factors have contributed to the rise of BJP, ranging from Modi’s charismatic leadership to Congress's dual electoral blunder of minority appeasement and corruption, to the rise of the amorphous middle class that favours BJP, etc. However, despite being at its electoral best ever since its inception in 1980, the BJP now seems to be passing through a transition period, on which little is being discussed, written or analysed.

BJP remains a cadre-based party with regular cadre supply from its parent organisation — Rashtriya Swayamsewak Sangh (RSS). Formed in 1925 on the premise of cultural nationalism rooted in the Hindu way of life against the perceived aggression of pan Islamism, RSS always viewed electoral politics with contempt. It wanted a rejuvenation of society and country, not through elections but by the proliferation of its ideology. 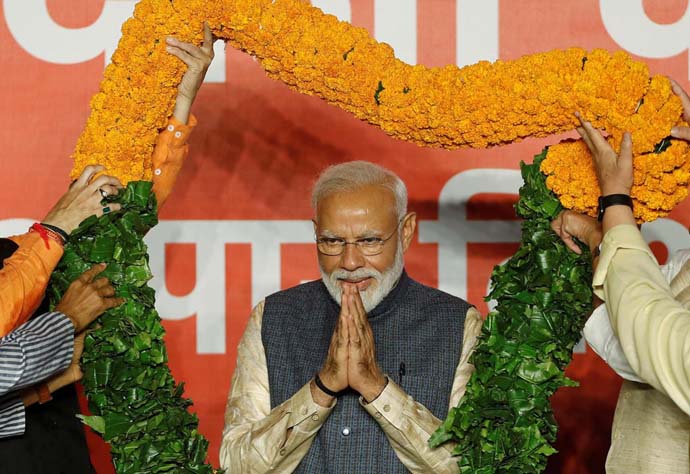 PM Modi needs to realise that the Indian electoral system is too complex and intriguing to be conquered by personal charisma alone. (File photo: Reuters)

The founder of Bahujan Samaj Party (BSP), late Kanshiram when asked if he is a rightist or a leftist, had aptly replied, “We are opportunists.” Talking of ideology, Indian politics seems to be bereft of it. Ideological positions at best could be either appropriated to the Left parties or the BJP. However, of late, BJP’s policies and decisions are less inspired by ideology and more by parochial benefits.

Every cadre-based party boasts of a hierarchy of leaders and so did BJP until very recently. PM Modi remains the most charismatic leader of his times but he doesn’t seem to favour the second rung regional leaders of his own party. AK Sharma, who happens to be a Gujarat cadre IAS and PM Modi’s trusted aide for 20 years, resigned from the services and has become a member of the Legislative Council in UP. This move comes amid speculation that Sharma will be allotted a key ministerial portfolio in UP. There were rumours of a rift between CM Yogi Adityanath and Sharma over cabinet reshuffle in UP. During the peak of the second wave of the Covid crisis, Sharma was sent to UP out of turn, where he was running a parallel Covid rescue operation in the Purvanchal. This didn’t go well with CM Yogi and finally, Sharma was appointed as State Vice-President in UP BJP, when already 16 Vice-Presidents are floating around in the state. Clearly, PM Modi's coterie tried cutting Yogi down to size and they failed. All seems well for Assembly elections 2022 in UP as of now.

This reminds one of the Sanjay Joshi episode. Joshi, Modi’s bête noire, was expelled from the 2012 BJP National Executive meeting in Mumbai. It is believed Modi conveyed to then-party president Nitin Gadkari that he would boycott the National Executive meet if Joshi attended it. Within two hours of Joshi’s resignation, Modi announced his decision to participate in the meeting in Mumbai.

The RSS response to this arm-twisting at the cost of cadre discipline was feeble, which was a sign of things to come. Though RSS calls itself a “cultural organisation” it now has widened its horizons with impunity. The Sanghsarchalak Mohan Bhagwat often visits poll-bound states. The Sangh was never as politicised as it is today, which is a realisation of coming to terms with power dynamics. Its position on MK Gandhi has been nothing short of a complete overhaul and it appears to be defunct on major policy matters, with sister concerns like Vishwa Hindu Parishad (VHP) and Bajrang Dal already inactive.

Uplifting the fortunes of the party has come amid opportunity costs. States with potential like Bihar now are a missed chance. BJP in Bihar always had a decent cadre. Since 2000, it never got less than 53 Assembly seats even when in 2015 it parted ways with ally JD (U). Sushil Modi never was a popular leader but remained at the apex position in Bihar BJP until very recently. Local leaders like Ashwini Choubey and Janardan Singh Sigriwal have been denied chances to groom the party unit. BJP chose to play second fiddle to CM Nitish Kumar ever since their alliance was cemented. In the 2020 Assembly elections, BJP won a whopping 73 seats whereas its alliance partner JDU managed merely 43 seats. Still, it’s the JDU that calls the shots. BJP didn’t even demand the key portfolio of the Home Ministry in the state. There is no local BJP leader who could assert in front of a fading Nitish Kumar.

Similarly, in Delhi, five times MLA Dr Harsh Vardhan emerged as the obvious choice, as he managed to make BJP the single largest party in 2013 Assembly elections with 31 seats — three more than the debutant Aam Aadmi Party (AAP). Dr Harsh Vardhan was kicked up to the Centre and ever since, Delhi BJP appears clueless against the maverick theatrics of Kejriwal-led AAP. One wonders what made Dr Harsh Vardhan — a very popular local leader — fight Lok Sabha elections. Old party stalwarts like Jagdish Mukhi were also sent to oblivion. Kiran Bedi was parachuted to Delhi BJP as CM candidate but her humiliating defeat in the 2015 Assembly elections raises doubt over the poll arithmetic of BJP.

In Rajasthan, two times, CM Vasundhra Raje faced the music before the 2018 Assembly elections when Modi coterie raised slogans of “Modi tujh se bair nahi, Vasundhra teri kahir nahi.” This infighting was not checked by the apex leadership. Vasundhra lost but BJP was always in the fight, which clearly tells that Vasundhra didn’t perform as bad as it was being speculated by the coterie.

In Maharashtra, Devendra Fadnavis was handpicked by Modi. He won the Assembly elections, again only to be hoodwinked by former ally Shiv Sena which displayed rank opportunism by allying with Congress and NCP. However, the Marathwada region, which is generally known to be a swing region (it’s believed whoever wins Marathwada wins Maharashtra), saw a resurgence of NCP. Alienating OBC leaders like Eknath Khadse and Pankaja Munde cost BJP in this region.

In Jharkhand, senior BJP leader Sarju Rai had some issues with BJP CM Rahgubar Das which resulted in his expulsion from the party. Das again happens to be Modi’s choice. What followed is unprecedented. Rai fought the 2019 Assembly elections as an independent and defeated the incumbent CM Raghubar Das from Jamshedpur East. A sitting CM losing his own seat to an independent candidate is rare.

BJP clearly seems to be apprehensive of the popular leaders in the state; more so, when they happen to be from the old rank and file of the party or the RSS. It favours turncoats like Mukul Roy and despite its high moral ground on corruption, the party comfortably ignores allegations of corruption while taking turncoats in its fold.

Brands outside politics also find favour with the current BJP. Examples being Kiran Bedi, E Sreedharan and Gobardhan Das. All three known names in their respective fields, but certainly not a leader of the electorate they were pitted against. No wonder all of them lost. Accommodating turncoats and parachuting non-political brands comes at the cost of alienating party cadre.

It is believed that Lok Sabha elections are fought on national issues and Assembly elections are fought on local issues. BJP under Modi has carefully tried to craft a narrative, where forget Assembly elections, even Municipal elections are fought on Modi’s name. The elections of the Municipal Corporation of Delhi (MCD) and Greater Hyderabad Municipal Corporation (GHMC) bear testimony to this fact. In both these elections, PM Modi not only campaigned, but was also touted as a panacea for all the local issues. Interestingly, BJP’s success in Assembly elections mostly comes in those states where Congress happens to be the arch-rival, with UP being an exception. Bihar (in 2015), Delhi, West Bengal, Tamil Nadu, Kerala, Odisha, Andhra Pradesh, Telangana have humbled BJP despite PM Modi leaving no stone unturned while campaigning in these states. Regional satraps are giving BJP tough time in states.

Undoubtedly, PM Modi has redrawn the political landscape of India, breaking rigid hierarchies of caste, region and to some extent, religion. Still, he needs to realise that the Indian electoral system is too complex and intriguing to be conquered by personal charisma alone. Local leadership needs to be nurtured and second-rung leaders need to be delegated power. He still remains a force to reckon with in Lok Sabha elections but in states, the regional issues have outshined his charisma. PM Modi can’t remain a de jure CM in states and in the long run, the cost of overlooking states might end up sour for the BJP.

Also Read: "The BJP will unify all nationalist forces"