A propaganda war is taking place in the southern state in favour of BJP and RSS.

“Kannur was ruled by a Muslim dynasty, the Arakkal Sultanate. Along (…) with imports of Arab spices and timber, it has in recent years imported strains of Wahabism from the Middle East.”

When columnist Minhaz Merchant opens his piece on Kannur with this claim, someone with any true understanding of the history of Kerala immediately moves this from the tag “politics” (where publisher DailyO has placed it) to one called “humour”, where it deserves to stay.

That’s because someone with even a cursory idea of the history of Kerala is aware that the region had long been the cradle of spice exports, with records going back to about 3,000 BC, when it had trade links with the ancient Sumerians and later Mesopotamians. Sumerians referred to this region, where the world came to shop for spices, as the “Garden of Spices”.

To say that Kerala imported “Arab spices” is as preposterous as saying Iran imported crude oil from Kerala.

As Merchant moves on to serious stuff — statistics — he makes a hash of it too. According to him, 38 per cent of Kannur’s population are Muslims (it is 29.43 per cent, according to 2011 census data) and he even goes on to call Kottayam a Muslim-majority district — much to the amusement of every Malayali, because Muslims make up a mere 6 per cent of the district’s population.

[Again, after being called out on Twitter, Merchant hastily modified the sentence to “(…) the municipality town of Erattupetta (in Kottayam district) Muslims comprise the majority” — which is lame because, Erattupetta is a small town of just 30,000 people, in Kottayam district with a population of nearly 2 million.] The actual and faulty claim can be found here, where the piece was originally published.

Now moving on to building the “grand narrative”, this columnist, Merchant, makes the following claim:

“Kerala (...) ranks among states with the country’s most violent communal incidents …”

While crime rates in Kerala are a different story, also a testimony to the fact that more crimes are reported in Kerala than in many parts of north, west or central India, “communal crimes” are a different ballgame altogether. Even this home ministry annexure from 2015 states that communal crimes in Kerala, which had seen a spike in 2011-12, still low compared to states like Uttar Pradesh and Maharashtra, have been steadily declining and had plateaued in 2015.

Interesting that Merchant makes his claim, because here the National Crime Records Bureau data for 2015 has Haryana, Karnataka, Maharashtra, Bihar, Jharkhand and Uttar Pradesh (in that order) as the states with highest instances of communal crime. Kerala? Not even in the top ten.

The rest of the piece is what can only be described as garden-variety RSS propaganda. Sweeping statements, with no figures or sources (“abductions have increased”, “conversions are rife”, “the state has succumbed to Wahabism”…), abound.

It is important that we look at Merchant’s work as a part of a much larger picture.

There is a propaganda war in the South, and columnists, who otherwise wouldn’t be able to find Kannur on a map, have become the footsoldiers of a carefully orchestrated campaign to fell Kerala from its staunchly anti-communal pedestal.

Many Malayalis are watching in amusement the sudden interest in Kannur that seems to have gripped a group of journalists in the national media. Their interest in covering the political violence in Kannur would have been understandable if not for the fact that there appears to be a concerted effort to over-report and hype any incident where RSS/BJP workers are the victims and to play down or not report at all when the RSS/BJP workers are the alleged perpetrators of violence.

Recently, TheNewsMinute’s Dhanya Rajendran made a preposterous claim on Twitter, re-tweeted almost 4,000 times, mostly by those outside Kerala, that the media in Kerala goes soft on CPM when it comes to violence committed by their cadres.

This drew outright laughs from even the fiercely anti-Left Congress supporters in Kerala, while most Malayali comrades had to pick their own jaws up from the floor.

The media in Kerala — print as well as television — have always gone after CPM, so much so that CPM actually started their own TV channel network (in addition to their own newspaper) to make themselves heard.

One only needs to rewind to 2012, to the murder of RMP leader TP Chandrashekharan, to see how the Malayali and English-language media in Kerala relentlessly cornered CPM and its leaders. It was only down to the CPM’s organisational strength in the state, that the party survived the ordeal with minimal damages — such was the media onslaught in the aftermath of Chandrashekharan’s murder by alleged CPM workers. Between 2012 to 2013, the TP murder case hogged the headlines in Kerala and the CPM lost key by-election in 2012 — in Neyyattinkara — chiefly because of the media rage that has continued ever since.

Moreover, Kerala-based columnists like Appukuttan Vallikunnu, who is a familiar face on Kerala news channels and print media, continue to clinically dissect CPM’s many political misadventures. Therefore to say Kerala media is “soft on CPM” is a glaring mistake, akin to saying that the ABP group is soft on the ruling TMC in West Bengal and its prima donna Mamata Banerjee.

Both incidents were adequately covered in the state’s media — the leading newspapers, Malayala Manorama and Mathrubhumi covered both incidents on their front pages (Kannur editions).

The following images are the screenshots of the frontpages of Malayala Manorama and Mathrubhumi, giving equal weightage to both the incidents. 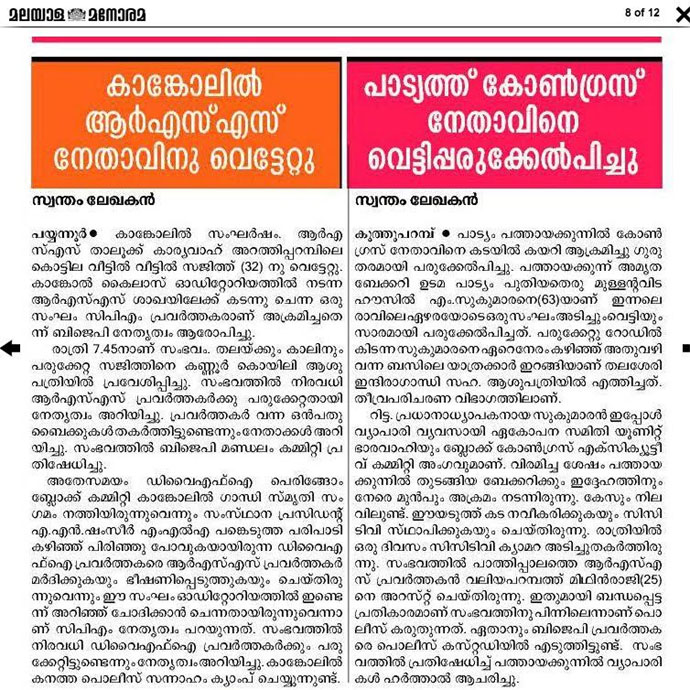 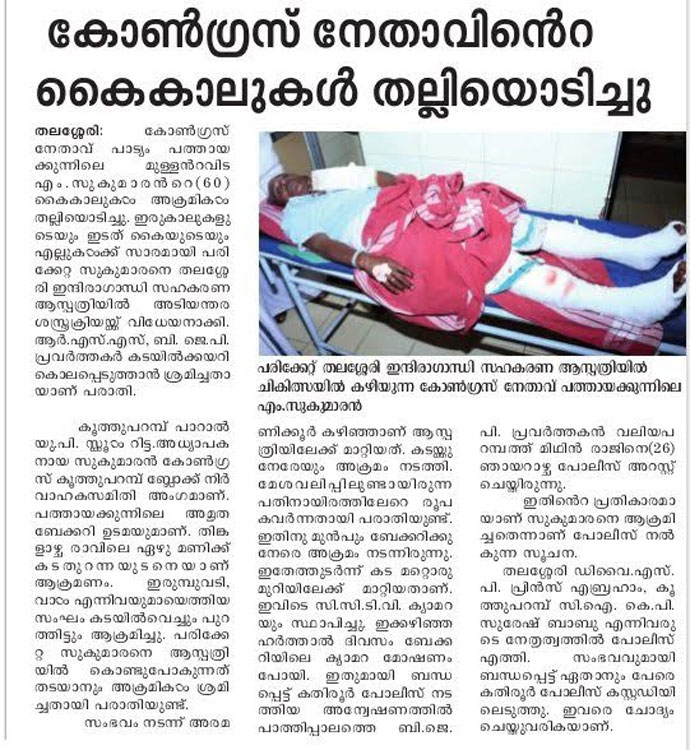 However, the national media had drastically different responses to each incident.

Within two hours of the latter attack, at 10PM, NDTV’s Vikram Chandra tweets this:

Shocking attack on RSS workers in Kerala. This violence must stop.

On available evidence, NDTV appears to have completely ignored the first attack and seem to have chosen to report the latter one in isolation. At this point, the BJP IT Cell gets into the act:

Worst form of Human Rights violation taking place against Hindus in Kerala but no Bollywood or Liberal celeb will tweet against this @ndtv pic.twitter.com/CMDnXIDVga

The assorted pro-BJP social media handles — trolls and others — provide the necessary background music of, no prizes for guessing, “Hindus under attack in Kerala”. As despicable the political violence in Kannur is, it is downright comical to describe a CPM-RSS scrap as “an attack on Hindus”.

Soon, there is none other Subramanian Swamy calling for what else but central forces to be deployed in Kannur.

Now Porkis have been put in the sewer with a smack the Centre must declare Kannur in Kerala as Disturbed Area. Will ask PM/HM to send CRPF

It is a well-known fact that the RSS (and BJP) have been trying, unsuccessfully, to gain a foothold in the red citadel of Kannur for a very long time. With a BJP government at the centre, it is only natural that they make a no-holds-barred play to prise Kannur from the hands of the CPM, by hook or by crook.

1. A “Malda model” (or “Kairana model”) “Hindus are being exterminated!” social media campaign to whip up the Hindutva core, generously supported by known right-wing trumpeters like Rahul Roushan, Subramanian Swamy and Minhaz Merchant.

Shocking. This govt is treating E Ahamed's death like hundreds of RSS/BJP members being killed in Kerala.

2. A “CPM goondaraj” themed media campaign fronted by popular English outlets such as NDTV and TheNewsMinute, aimed at the urban citizenry. One has to give credit to whoever is running this operation, that they even got Rana Ayyub to play a part, perhaps unwittingly, here:

The brutal murder of BJP/ RSS workers in Kannur must be called out. This is savage and has no place in a democratic set up

3. A Trojan horse campaign by Asianet News, under the helm of who else but Rajeev Chandrasekhar, BJP MP and the vice chairman of the National Democratic Alliance in Kerala. It is interesting to note that Rajeev Chandrasekhar is an important investor in Arnab Goswami’s upcoming media venture Republic TV, which now has roped in TheNewsMinute’s Chitra Subramaniam as an editorial advisor, according to her Twitter bio.

The goal of #1 and #2 is clearly to set the ground, to make the case, for deploying central paramilitaries in Kannur under the guise of establishing law and order and if  possible, to dismiss the CPM-led LDF government.

As for goal #3, Rajeev Chandrasekhar and Asianet News’ primary charter appears to be this: to establish BJP as the “real opposition” in the state, their mere one MLA in the 140-seat Assembly notwithstanding.

It is one thing for a known “BJP channel” like Janam TV in Kerala to do propaganda for the Sangh Parivar but when Asianet News, in their “neutral” garb, does it day in and day out, it starts to stick. Asianet News plays a huge role in “bigging-up” BJP in Kerala – the disproportionately high airtime given to BJP leaders, the changing composition of their newsrooms, editorial spin – none of this has gone unnoticed by those who observe Kerala politics.

Overall, interesting times lie ahead for Kerala and for chief minister Pinarayi Vijayan. Will the Malayalis keel over and take it lying down, if the centre tries their “regime change” shenanigans?

Unlikely. We will mostly tie the unsuspecting central paramilitaries up in a few hartaals — this is our home turf — and send them back home with banana chips and a taste for Thalassery biriyani.

As for the “media war”, thanks for the laughs.

#Hindu Right Wing, #Violence, #Kerala
The views and opinions expressed in this article are those of the authors and do not necessarily reflect the official policy or position of DailyO.in or the India Today Group. The writers are solely responsible for any claims arising out of the contents of this article.

Meen Aviyal is a group of Malayalis — some by birth and some honorary — from around the world, from across party-affiliations but united in their fierce commitment to the ‘Malayali Way of Life’: irreverence, fun and porotta-beef. Our laughter is Mahabali's revenge.