The saffron party's West Bengal chief believes in grunting, snorting fire and billowing clouds of smoke, with total disregard to its impact.

The angry, not quite young, man leading the saffron brigade in West Bengal, Dilip Ghosh, doesn’t believe in being civil. Neither does he believe in being glib, which is necessary for being a politician. He just believes in grunting, snorting breathing fire and billowing clouds of smoke, with total disregard to its impact and most of the times even oblivious of the fact that he has misfired and ended up burning his own fingers, and above all putting his party’s reputation and image at stake.

The recent case in point is Ghosh’s uncalled for remarks on Nobel laureate economist Amartya Sen. Ghosh has called Sen “spineless” and without a “character,” whatever he might mean by that. Not known to stop, Ghosh has questioned Sen’s contribution for Bengal and even put a big question mark on the popularity of Dr Sen’s thesis: “Nobody knows about his thesis paper. Those who speak in his favour, clap for him, I ask them, if they are aware or have seen his research work.”

Ghosh, when asked if he would apologise and take back his words, was unstoppable: “Why should I regret or eat back my words? Dilip Ghosh is not known to back-track. I give a damn to what the Chattopadhyays, Mukhopadhyays and Bandopadhyays are saying.” The reference to the surnames was a dig at the intellectuals, who have sharply criticised Ghosh and his acerbic tongue.

Not being cowed down by the volley of criticisms, which has come his way, the angry man has shot back saying that the intellectuals are so busy running after the awards and other facilities being offered by the government that they have no time to take note of the deteriorating state of education, leave aside raising concern and alarm. 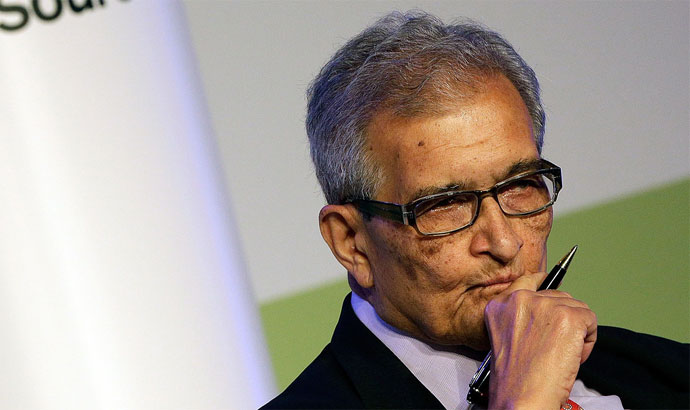 In response to Ghosh’s uncouth barbs, Amartya Sen, as always and as expected, was a thorough gentleman.

In response to Ghosh’s uncouth barbs, Sen, as always and as expected, was a thorough gentleman. Taking the jibes in his stride, as “democratic right of an individual to express his opinion,” Sen even invited Ghosh for a dialogue on this. But, Ghosh, stubborn and incensed that he is, is refusing to let go.

Amartya Sen’s contribution for Bengal or the country is debatable but hurting Sen amounts to hurting the Bengali pride. Sen is a Bharat Ratna and many in the saffron party feel that Ghosh, by jeering at Sen’s achievements, has also undermined the prestige of the recipients of such awards. But they are yet to be publicly vocal.

The Left and the Congress have jointly moved the state Assembly to pass a resolution condemning Ghosh. The Trinamool Congress initially chose to stay away from the spat. But, sensing that choosing to stay mum on this occasion might be construed as a BJP-Trinamool Congress understanding, the party held a press conference to condemn Ghosh.

The BJP is yet to break its bread. Though leaders in their individual capacities have steered clear of the controversy and are not making any public statement for fear of being reprimanded by the state chief, they have gone active on social media. Some have even braved to put forth a suggestion that an economist from the BJP would have been the appropriate authority to question Sen on his work and credentials.

For all said and done, the BJP cannot sing paeans of Sen, who has been extremely critical of Narendra Modi’s demonetisation experiment. Being a Nobel laureate and a man of authority in his subject, Sen has dissected the economic reforms of the Modi government into shreds. But giving Sen unnecessary publicity by choosing to be intentionally jarring is perhaps worse.

Ghosh cannot help. When his political curve does not look promising with the BJP’s graph not showing much improvement either in West Bengal, the angry man from the RSS can do little but rant and keep on ranting.

#West Bengal, #BJP, #Amartya Sen
The views and opinions expressed in this article are those of the authors and do not necessarily reflect the official policy or position of DailyO.in or the India Today Group. The writers are solely responsible for any claims arising out of the contents of this article.