Why arrival of endangered black-necked crane in Arunachal is momentous

One of the only two wintering sites in India for the migratory bird remains vulnerable due to a proposed hydropower project.

Onset of Indian winters has been synonymous with the arrival of migratory birds for ages. But over the last few decades, several of these winged visitors have displayed a change in seasonal movements due to the destruction of - or threat to - their habitats. The sighting of six black-necked cranes in a remote Tawang village has swept local activists, conservationists and environmentalists with a wave of cheer.

The black-necked crane is an endangered bird that has chosen a remote – untouched from modern ills – area deep inside Tawang district of Arunachal Pradesh as its wintering site. Zemithang on the Nyamjang Chhu river in the Pangchen Valley of Tawang district is its chosen winter abode, now threatened due to a proposed hydropower project. Zemithang is one of the only two wintering sites of the black-necked crane in India, the other being Sangti Valley in neighbouring West Kameng district.

Black-necked cranes migrate from Tibet during the winter. Classified as "vulnerable" in the list of endangered species of the International Union for Conservation of Nature (IUCN), these beauties also figure in schedule I list under our Wildlife (Protection) Act, 1972. 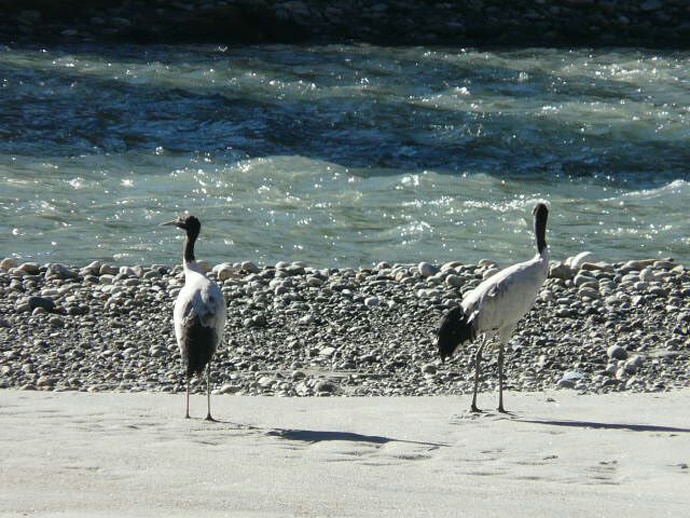 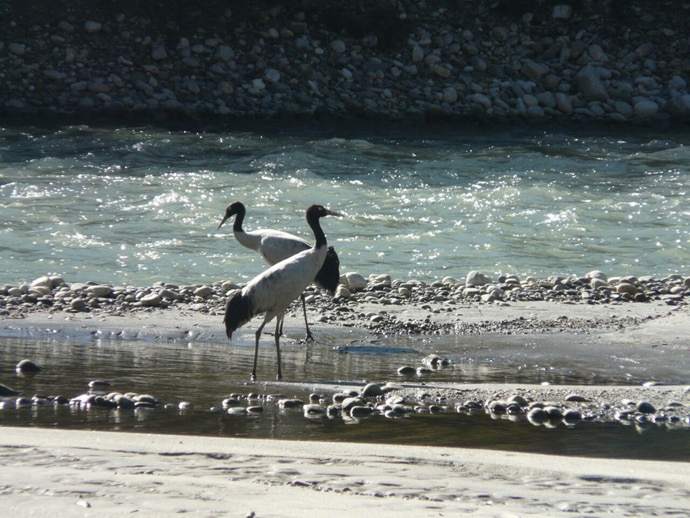 Black-necked cranes at one of the only two wintering sites at Zemithang in Pangchen Valley, Tawang. (Photos: Degin Dorjee)

According to data on migratory birds by ENVIS Centre on Avian Ecology, hosted by Bombay Natural History Society (BNHS), almost 20 per cent of all known bird species, about 2000 of them, make regular seasonal movements.

Alarmingly, “more than 40 per cent of these migratory species are declining and nearly 200 are now classified as globally threatened.” The dangers they face include destruction and degradation of habitats, pollution and badly-sited infrastructure.

Arunachal's Tawang district has two main rivers – Tawang Chhu and Nyamjang Chhu, which together have 10 tributaries. The government has proposed as many as 13 large hydropower projects with a total installed capacity of 2,900 MW in the district. Located 90-odd kms northwest of Tawang town, Zemithang, Lumpo and Muchot are all remote villages, nearer to the international border and one can reach them via a winding, hilly road.

Zemithang, at an altitude of 8,000 feet approximately, is the village nearest to the proposed location of the barrage for the 780 MW Nyamjang Chhu project on the Nyamjang Chhu in the Pangchen Valley. Main Pangchen Valley is a narrow stretch - 1.5–2km long and barely 0.5–0.75 km wide, with much of the riverbed exposed during the winter with silvery sand - home to the endangered black-necked cranes.

Against this backdrop, Zemithang becomes a classic example, especially when black-necked cranes have been sighted this year too – even if just one. “Waha me ek tho crane aaya hai (One crane has arrived there),” Lama Lobsang Gyatso, the activist monk who has been fighting against the proposed hydropower project, told me excitedly over the telephone some days back. Gyatso, a Lama from the Monpa community, is a founding member of the Save Mon Region Federation (SMRF). Monpas comprise almost 90 per cent of Tawang’s population.

Thankfully, not just one, six black-necked cranes have been spotted this year as yet.

Arunachal’s other sites that hosted the black-necked cranes have already shown signs of damage. A 2015 scientific paper "Status and Distribution of black-necked Crane (Grus Nigricollis) in India" published in the journal Zoological Research, captured in detail the sightings of these birds at their breeding locations and wintering sites from the year 2000 to 2014.

Arunachal Pradesh had a history of these birds sighting at Apatani valley and Sangti Valley, but for last few decades, the birds have abandoned the Apatani valley.

“The disappearance of black-necked cranes from Aapatani valley is attributed to habitat loss, degradation and poaching,” the paper pointed out.

The year-wise figures from Arunachal Pradesh as the scientists found during this comprehensive study, "Status of black-necked Crane observed in Sangti and Zemithang valleys":

As is evident from the table, 2009 onwards, Sangti has not seen any cranes except just four on a single day in 2014, mainly because of habitat destruction. The presence of high tension wires in the crane habitat – supply lines cut right across the valley – is a continues threat in Sangti valley, where a crane was killed after hitting a high-tension power line in 2007.

Another change is the shifting crop pattern where traditional paddy crop has been replaced in large quantum by horticulture or maize plantation. Therefore, since 2010, Zemithang has emerged as a destination of choice for the black-necked cranes.

Since 2010, World Wide Fund-India (WWF-India) has been monitoring the presence of and working for the conservation of these birds along with local Monpa population. Kamal Medhi, WWF-India coordinator, Western Arunachal Landscape, said: “There have been in all six sightings as yet in 2016. Two in mid-November, two towards November end and two in December first week.”

“Historical evidence has shown how habitat destruction has made birds abandon the Sangti Valley site. So, it becomes much more important to preserve, keep undisturbed the Zemithang site,” said Medhi, who is based in Assam's Tezpur.

I had visited Zemithang earlier this year and reported how the National Green Tribunal (NGT) had suspended the environmental clearance given to this 780 MW hydropower project, clearly pointing out to the fact that the environmental clearance made no mention that the project will have an adverse impact on the winter habitat of the black-necked crane.

The tribunal had asked the government to carry out cumulative impact assessment studies. It also asked for a fresh appraisal of the project and a separate study by Union ministry of environment, forests and climate change - to be undertaken by Dehradun-based Wildlife Institute of India (WII) – to determine the flow requirement for the protection and conservation of the black-necked crane.

Interestingly, counsels for the private developer for the proposed project had disputed the site was the preferred winter abode of the birds. Lama Gyatso and other petitioners in the NGT case had established how it was indeed a site of continuous winter habitation.

The scientific paper published in the Zoological Research journal has recommended that Sangti and Pangchen valleys be declared black-necked crane nature reserves to revive their wintering population and measures be taken to maintain their ecological integrity on priority.

“Now there is nothing left for imagination. The presence of birds has been clearly established. One of the authors of this scientific paper published in Zoological Research was S A Hussain from WII Dehradun. The same WII has been asked to do the study by the NGT. Hope the findings are consistent with the earlier findings,” points out Neeraj Vagholikar, environmentalist with the NGO Kalpavriksha.

During the NGT hearing, the petitioners had also drawn from the local cultural connection emphasising that the Monpas consider the black-necked crane an embodiment of the sixth Dalai Lama, Tsangyang Gyatso, who wrote about the majestic bird in his poetry, reported Arunachal Times.

Perhaps, keeping the historical connection alive, the birds have reposed faith in the Monpas of the Pangchen valley in Tawang for yet another year. Will the ministry and WII live up to their expectations?

Post your comment
#Arunachal Pradesh, #Birds, #Black-necked crane
The views and opinions expressed in this article are those of the authors and do not necessarily reflect the official policy or position of DailyO.in or the India Today Group. The writers are solely responsible for any claims arising out of the contents of this article.