An Extraordinary Life: Manohar Parrikar, the man under whom Rafale deal was signed

Manohar Parrikar laid the groundwork for overhauling the Defence Ministry, cutting down on red-tapism and flinging it into action.

“You stick your finger in the water and you pull it out, and that is how much of a hole you leave when you’re gone.”

Authors Sadguru Patil and Mayabhushan Nagvenkar use these lines from The Daybreakers, a novel penned by Louis L’amour, to describe what Manohar Parrikar’s legacy may mean today to many, including his own party members, just over a year after the former Defence Minister’s death. 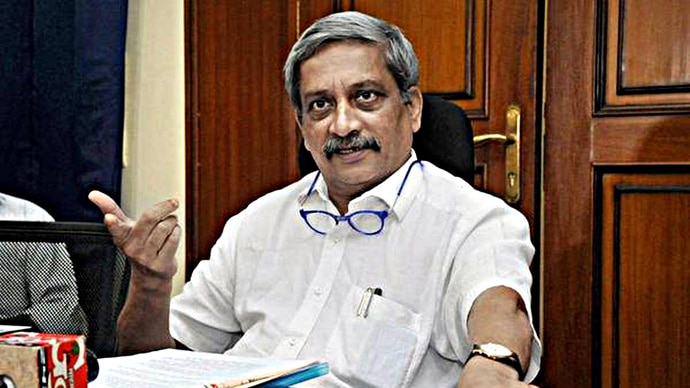 Manohar Parrikar was Defence Minister when the Rafale deal was signed. (Photo: PTI)

Some occasions however serve as reminders of all things - even those pushed deep into oblivion. The landing of five Rafale jets in India’s Ambala after a wait of what, many say, has looked and felt like eternity, makes it just the right occasion to remember Parrikar, the man under whom the deal to bring 36 Rafale jets to India from France was signed.

Parrikar was inaugurating a mobile fish stall in Goa when Prime Minister Narendra Modi was inking the deal for the fighter jets with French counterpart Francois Hollande, but he did lay the groundwork for overhauling the Defence Ministry, cutting down on red-tapism and flinging it into action. He dusted off defence deals stuck in bureaucratic quagmire and worked overtime to get promises like One Rank One Pension fulfilled.

But there was more to Parrikar than the efficient technocrat he was perceived as in Delhi. All of that began in Goa.

An Extraordinary Life: A Biography of Manohar Parrikar by Patil and Nagvenkar celebrates the man the former chief minister from Goa was. But you can’t truly celebrate a man acknowledging only his virtues and turning a blind eye to the vices. Most real humans lie somewhere in between the two.

Patil and Nagvenkar have after a long wait in the era of political biographies presented a work that is objective and fair to the person being documented. If the purpose of a biography is to capture a life and not build propaganda around it, the authors have done their job well.

That the two men have been journalists of repute for fairly long periods perhaps helps add balance to their work in documenting Parrikar through numerous anecdotes.

Parrikar’s life began in Goa. His ability to argue in earnest and quick-think ways out of complex problems was seen even in childhood. Once Parrikar went to watch an ‘adult’ movie with his brother Avdhoot. To their horror the brothers found their neighbour also present in the hall. This neighbour used to chat with their mother every evening. They knew there was a risk of being reported. A young Manohar reached his mother after the movie and told her that the two went for a movie without knowing it was vulgar. The moment they realised, they decided to leave and then they saw ‘the neighbour’ watching the movie. When the said neighbour met Manohar’s mother and told her about her sons at the hall, the mother told him: “I know which movie they went for, but why did you go for the movie?”

Parrikar associated himself with the Rashtriya Swayamsevak Sangh (RSS) early on in life. He used this base to firm up the BJP in the state. As an IITian, Parrikar commanded the respect educated people tend to in small towns like the one he hailed from - Mapusa. Parrikar’s father ran a grocery store in the town.

Even after Parrikar became chief minister, he did not mind attending to customers at the shop where he had helped his father in the early years. So attached was he to the life in Goa that he couldn’t adjust to the perks and privileges Delhi offered. He requested to be moved back to Goa.

It is said that Modi trusted Parrikar because of his clean image and tough stance. But Parrikar had also shown to be unfairly rude to people. Once when a local businessman in Goa accompanied a Goa MLA to Parrikar’s residence to request him to attend a function, the man sat outside as the MLA walked in to meet the CM. Parrikar apparently screamed so loud over being disturbed for official work at home that the businessman quickly retraced his way back home. He later said if he could shout at his own MLA so loud, what would he do to others? Narendra Modi wanted Manohar Parrikar to take over the Ministry of Defence because of his clean image. (Photo: PTI)

Parrikar was a family man. The death of his wife Medha due to cancer left him devastated and with two sons to care for. At one point, one of his sons threw a fit that he wanted a new mother and so Parrikar must remarry. Many around him were telling him to do the same. But he didn’t. When his proximity to a lady IAS officer started gaining steam in gossip circles, he reportedly got her transferred using his good offices with RSS leaders.

If there was one weakness Parrikar had, it was food. Part of the reason he didn’t want to remain in Delhi was getting Goa-like fresh fish was difficult. It is not usual for a political biography to dedicate a whole chapter to ‘Curry, Cafreal, Crabs and Cigarettes’.

The man, who loved his smokes and beer, was worried to see women drink. He had no qualms accepting that seeing women drink made him unhappy. Why he wouldn’t keep that unhappiness to himself is difficult to answer.

Despite all that has been said about Parrikar’s clean image, political and family compulsions did see him leave room for adjustments. In 2001, Parrikar’s government in Goa arrested a Congress MLA, Mauvin Godinho, in a power scam. In 2017, Godinho joined the Parrikar cabinet as a minister. The justification for this came in 2016 when Godinho joined the BJP: “There was an attempt [to commit] a scam, which I stopped and recovered Rs 63 crore to the state treasury. Now the court will decide whether it was a scam or not.”

Parrikar kept his family away from politics but his son Utpal’s father-in-law Dr Mahesh Sardesai's services as the head of the radiology department at the state-run Goa Medical College were extended and renewed on numerous occasions after his formal retirement. Four months after Parrikar died, Sardesai’s services were terminated abruptly.

From his promises on banning casinos to mining in Goa, Parrikar made so many U-turns in his political career, it was difficult to trust he wouldn’t sacrifice probity at the altar of political expediency.

In the face of criticism, he took to lashing out at the media. The authors dedicate a chapter to his relationship with the media. Once after a post-cabinet presser, two journalists, one of whom was a woman, rushed after him for a copy of the cabinet note.

Even as he was walking, Parrikar handed over the note to the two saying, “Take everything you want. Just spare me my underwear.”

He had built his way up with a certain brashness without which rising through the ranks is considered impossible in politics, unless you have a political lineage to flaunt.

Yet with the power he commanded and Modi's trust in him, Parrikar’s legacy could have been richer than it is. His untimely death to cancer is part of the reason it isn’t.

Patil and Nagvenkar provide a 360-degree view to the many turns Parrikar’s political career took even as Parrikar moved from Goa to Delhi and to Goa again.

#Rafale, #An extraordinary life, #Manohar Parrikar, #Bookreview
The views and opinions expressed in this article are those of the authors and do not necessarily reflect the official policy or position of DailyO.in or the India Today Group. The writers are solely responsible for any claims arising out of the contents of this article.