Just a road: Better infrastructure could save Indian troops from serving in extremely harsh, cold conditions on the Indo-China border

Unlike India, the Chinese, with the advantage of roads that take them to the border in a jiffy, can afford to stay back in peak winter, confident of quick mobilisation, not needing to expose their men to extreme conditions.

Indian troops who have to serve at posts as high as 19,000 feet guarding the China frontier in hostile weather that dips to -45 degrees would not have to face such harsh conditions 24x7, 365 days in a year if the forward areas have good roads.

Unlike the Indian Army, the Chinese don’t have mass numbers lined up at the frontiers in peak winter.

At North Sikkim’s sensitive international border, the Indian Army has to dominate the forward areas and peaks at all times.

But 20 km from the international border, under Chinese control is the town of Khamb Dazong, well developed, from where mobilisation is quick and easy. Within minutes, the Chinese troops can reach the borders.

The situation is the same along other parts of the border areas too. 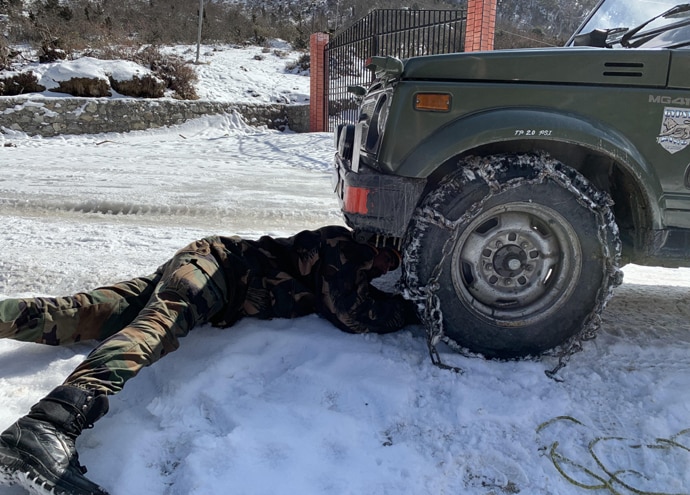 The daily grind: Indian troops serve at posts as high as 19,000 feet, guarding the Indo-China frontier in hostile weather that dips to -45 degrees. (Photo: Abhishek Bhalla)

While the areas on the Indian side are sparsely populated due to very little development, the Chinese have ensured they have migration and populations thus settled in the Tibetan Autonomous Region from the mainland (TAR). Perhaps a lesson there for the Indian authorities to learn. Better infrastructure and road connectivity would mean having to have fewer men up in harsh living conditions.

The movement of troops, even sending supplies to forward areas, remains a big challenge in this tough and treacherous terrain. With army posts located at heights up to 19,000 feet, mobilisation is always slow.

“It is important that we have more ascendency. This is the best way of showing we are more hardened than you. We are 800mts from the international border even as temperatures dip to -40 degrees and dominate with foot patrols when vehicles can’t reach,” said Colonel BS Chhikaara, commanding a battalion in North Sikkim. 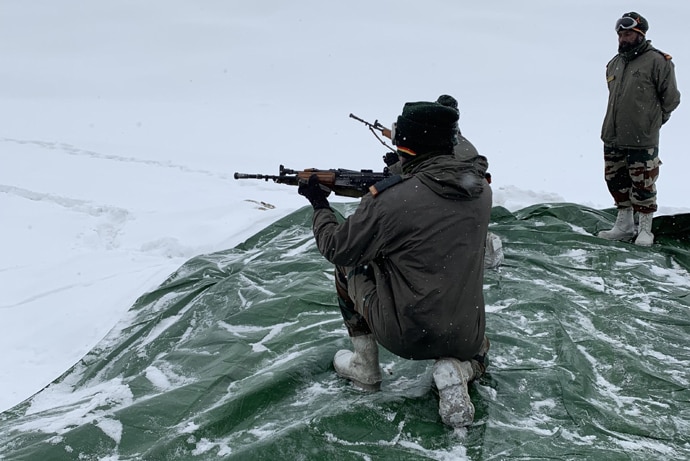 Far from Easy: The movement and daily lives of troops, even sending supplies to such forward areas, are huge challenges. (Photo: Abhishek Bhalla)

The Chinese prefer to stay away from the biting cold and away from the freezing climes as they are confident of quick mobilisation.

“With proper roads, even we wouldn’t need to keep troops in extremely harsh and unfriendly conditions all the time,” said a senior army officer serving in the region.

India Today travelled 54km along the International Border and found that while China is beefing up infrastructure, a move that has signficantly reduced mobilisation time for them, the Indian Army struggles with ensuring movement due to poor roads that can completely cut off some of the forward posts when there is heavy rain or snow.

On the other hand, broken roads and poor infrastructure remain a big challenge. Border areas are sparsely populated and mostly cut off for civilians, making them non-accessible and overlooked. The winter months are extremely harsh with our troops facing severe problems of low oxygen and other high altitude issues. (Photo: Abhishek Bhalla)

It’s not just these military challenges but tough living conditions at such locations that can also play havoc with a soldier’s mind.

The winter months are extremely harsh with troops facing severe problems of low oxygen and other high altitude illnesses. It is little wonder that evacuations from the higher reaches are common in these conditions.

It’s not always that the troops are gearing up for military tactics. Serving in such tough and hostile conditions also brings many close to seeking divine intervention. Many of the troops of the SIKHLI regiment, for instance, serving in remote forward posts seek spirituality for their peace of mind.

Here's hoping that helps them through these difficult conditions, even while the authorities take note of the Chinese example and try to apply lessons therein.

#China, #North sikkim, #Winter, #Doklam
The views and opinions expressed in this article are those of the authors and do not necessarily reflect the official policy or position of DailyO.in or the India Today Group. The writers are solely responsible for any claims arising out of the contents of this article.